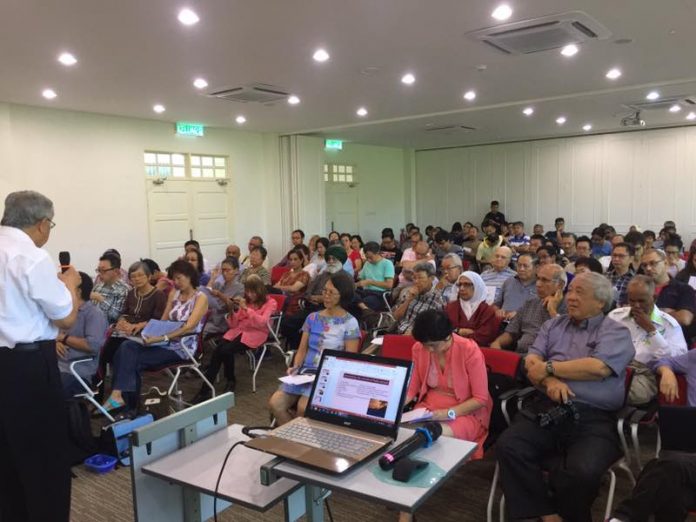 Participants at Penang Forum 7: #SaveJerejak today called for a moratorium on any property development project at Pulau Jerejak, an island steeped in history.

There were some who felt that some kind of ‘development’ on the island was inevitable and the best we could do is insist that the natural, cultural and built heritage should be preserved.

But many others, like me, wanted the island and its history preserved in its entirety as a treasure to be handed down to future generations.

In the end, the participants agreed that there should be a moratorium on any further ‘development’ on the island and instead, an independent (note, independent) special area plan should be carried out for the island, this time with genuine public participation.

Participants also agreed with a recommendation for the island to be gazetted as a Penang state park and for its heritage to be conserved.

The response from the public and the press surpassed the organisers’ expectations. Researchers spoke about the island’s rich multi-faceted history over various periods since the late 19th Century and its natural heritage while a few in the audience shared their personal connections to the island.

I will be relocated to Penang from Singapore by my company later this year.

I have been reading this blog to get a feel of Penang on-goings and the sentiments of its residents.

How can I participate in Penang Forum activities?
I could share the best practices from Singapore.

Welcome to Penang, Joseph! Keep an eye on the penangforum.net website for any activities that may come up.

Penang Forum folks are not receptive towards the best practices from Singapore, they tend to have impression that Singapore is a concrete jungle with no heritage preservation.

“Packed” because the room is small?
Maybe Penang Forum is operating on a tight budget?

Luxury property owners taking up to 30pc cut just to seal the deal https://sg.news.yahoo.com/luxury-property-owners-taking-30pc-cut-just-seal-224900423.html “If you look at the property market in KLCC and KL Sentral, owners are willing to rent out office spaces and homes for RM3 and RM4 per square feet compared to RM7 and RM8 before 2013,” senior property consultant Jeremy Jr told Malay Mail Online when contacted. “Owners lowering the price of their properties by 20 to 30 per cent is also becoming a norm these days,” the agent from Oriental Realty added. The drop is also fuelling a vicious cycle. Lower rental yields are making… Read more »

I will vote DAP until Penang and all the islands are stripped bare. I want to be torn, lost of faith, cold and chained lying naked on the floor

Sadomasochism?
What a way to “I Love Penang” – painful, sadism… + impairment, humiliation, in return for selfish gratification!
https://en.wikipedia.org/wiki/Sadomasochism
Is this a reward for “I Love CAT” or “I Love Niao Kong” (to be more precise)???

Are you still comfortably numb with many unsavoury happenings in Bolehland?

Besides the significance of Another Brick In The Wall to reflect current national fiasco, I dedicate this song to Tunglang & Raj666, can get the kick with guitar licking without the caffeine of kopi o I hope Anil can enjoy as well to relax after the tensions of Jerejak.

Are you implying or accusing selective numb?
Get real. What is happening in our country is not for selective finger pointing. Much less, political apologetic to deities.
Maybe, you love Botak Hill for all the splendour of a view, including Pulau Jerejak with a makeover Ala the CAT! Nevermind the mud with no life beneath your feet, or let me be more precise selectively, No Greener Life Penang!
Kick your self in the head if this is all about your numb for political traders.

When bn comes to power you and anil has to shout more. Bn has been talking they are only ones can bring development.

LGE trial b4 GE14, and justice is for us all to see.
If you assume I pro Developers, then be it.
Btw, Anil may be too preoccupied with Jerejak to to forget to inform us Affordable Homes expo at Prangin Mall last weekend so today I shall go to PDC to check out.

“MONEY” by Pink Floyd is more appropriate, as the Penang hawkers are cashing in with small portion offering and Upside with additional charges:

Prema
Tlang is Anil’s inherent voice (besides his primary 6 senses) to echo his inner feelings so hokkien folks can identify with. Kind of the partnership of Batman and sidekick Robin.

Anil, pls tell the audience have we met in person? To connive, to hypnotise, or to demonise between 2 brains? How to be your personal voice? But one thing is certain: in this blog, my inner passion is fired up when a contentious issue is brought up. Maybe, we share the same thoughts. The same disgust for that slippery CAT with no humanity for humans & nature. You want to know my 6 sense? Here’s one: that Niao Kong won’t last in Penang. Go on, get angry! Knee-jerk all night long! Blame my 6-sense. Then blame Anil! Blame our voices!… Read more »

No, I have never met tunglang before.

That’s the problem. Many who share same vision remain in virtual world, and no physical get together to bond and fight injustice in real world.

What problem? Highlighting issues is a problem, even if one is not a member of any NGO? There are other ways to fight a cause.
Pls go to my Facebook to see.
May be you have a deep seated problem with anilnetto.com as a platform for justice for anybody, an angst to political traders & those who don’t have a human heart.
I smell a troll.

What so difficult to highlight problems and more so with grumpy old men? What is there to respect them? Only those come and trying to resolve them deserve our praise. Tunglang and anil should blame on salma khoo who is also from pg forum….

Reserve Pulau Jerejak for public park only. Beach is actually a very good healing source for people suffering mental depression according to some reports.

Build malls and theme park in Pulau Jerjak please. What a waste of land letting it sit undeveloped for 50 years. #developjerjakbest

The Head & The Heart

Many business dealings reportedly already being signed at state and federal levels.
UDA, Tropicana, Ideal Properties reportedly signed many dealings for projects on Jerejak.
Many cash involved with (some of) these big Corporations (allegedly) offering CSR project to the community like building temples (9 Emperor God at Lip Sin) and may be churches elsewhere.

Cannot blame property price in Penang is high, when the price of hawker food is ridiculously high given its small portion as reported on The Star today: Heftier prices, smaller portions too much to swallow in Penang http://www.thestar.com.my/news/nation/2017/04/09/heftier-prices-smaller-portions-too-much-to-swallow-in-penang/ GEORGE TOWN: The famous Penang hawker food is not only getting pricier but the servi­cing size is also getting smaller. It can cost more than RM10 for a bowl of Hokkien mee with “add-ons”, or a plate of the famous char kuey teow with three prawns. Federation of Northern Hawkers’ Associations deputy chairman Lam Tong Ying said visitors from other states and… Read more »

But are the higher rentals and property prices driving up hawker food prices.. apart from GST?

The hawkers can charge high because there are many gullible and ignorant buyers in Penang? The portion is so small only to serve as appetiser, so that you order more?

Do not be surprised if these hawkers could afford expensive condos in Penang.

Anil, this is the standard reply I got from the ‘super-hai-priced’ hawkers eps in Pulau Tikus & George Town kopitiams – high rentals (for stall space only) from hundreds to more than a thousand ringgit plus increased costs of ingredients. But then again, it depends on which cuisine – Hokkien Mee has higher costs in terms of prawns. Location is another determinant – one can get cheaper hawker food from the roadside stalls & those outside of city. BUT, it seems many hawkers are riding the bandwagon of Penang Hai Price Hawker Food to maximise profits now or never (regardless… Read more »

Eating roadside stalls and food is acceptable in your era where bicycles are king if the road and longkang water is cleaner than pipe water. but now is different. Fumes and dust add to your food. Water for cleaning is recycled with high turnover. bigger population easy to spread disease. Even rats are more .

“Hokkien Mee has higher costs in terms of prawns” – The soup is derived from prawn shells.
The basic bowl is already expensive with small shrimps, even before separate surcharge for additional prawns.

I think the hawkers too have to face the higher cost of living.. more expensive homes, vehicles, fuel prices, children’s education, GST – and now with subsidies being removed. So they pass on those costs to their customers as well.

Anil
Its not the higher rental that drive the hawker food up in Penang.
KwangHwa paper knows this is now a big social matter burning ordinary Penangites pocket money while majority hawkers irresponsibly raise prices.

The Chinese has mentioned Spore food stall rental as high as S$2-3K a month and yet they can offer a dish of $3! All because the S gomen supervise unreasonably pricing!

Penang Forum SHOULD focus on how to make sure Penang Street Food remains affordable to the locals.

I dont think its just the rental. Its a combination of things driving up the hawkers cost of living: higher property prices, price of meals for the hawker families, the cost of their childrens education, healthcare costs, private vehicle prices.

Certain hawkers can be greedy to charge high price, not just housing developers.

Fresh graduate’s starting pay in Malaysia is RM1800, while in Singapore is S$2000.

Can you see the difference?
No wonder young Malaysians have little savings.

A typical McDonald’s meal (burger/fries/drinks) is RM9 in Malaysia while it is S$5 in Singapore.

Singaporeans spend less on typical fast food meals in terms of proportion to their monthly salary.

No report of this Save Jerejak Forum on Sunday Star, instead it has Mat Lajak report on front page. Editor Wong CW did not see the importance of this event?

Can we spot the elusive tunglang on the picture posted by Anil at the forum? Maybe he was not there, but in Sungai Petani for the Expresi Negaraku event, for free cooking oil?

Met a Star reporter at the forum though.

Should have invited Wong CW or Joceline Tan from The Star to get coverage?

Who or what is “tunglang”?

Who or what is “tunglang”?

Market buzz talk these days on where to get free cooking oil, showing how tough life is in barang naik situations!

Prema, UR right. What is tunglang?
So, why keep on knee-jerking @ the slightest voice of tunglang?
Just get numb (to borrow that word from Damien)!