Few people are aware that the famous Indian Nobel laureate for literature, Rabindranath Tagore, visited Penang in 1927. He also passed by this way in 1916, 1924 and 1929. 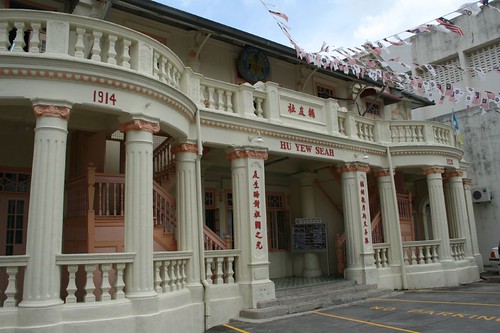 This is the Hu Yew Seah building in Madras Lane for which Tagore laid the foundation stone in 1927. You can see one wing of the building indicates ‘1914’ and the other ‘1928’. The building was used as a place to teach the Chinese language especially to the English-educated Chinese, including the Baba or Straits Chinese.

During one of his voyages to Penang, Tagore reflected on the beauty of the natural world. But upon his arrival in Penang and surveying the bustling activity at Penang port, the poet could not help but reflect on the greed that plagues humanity. This was revealed to me by historian, author and Gardiner Professor of Oceanic History and Affairs at Harvard University Sugata Bose, after his Penang Story Tagore lecture “Building bridges across the Bay of Bengal: Tagore and his contemporaries’ on 28 August 2012. (Incidentally, Sugata is the grandnephew of Subhas Chandra Bose, who organised the Indian National Army to try and free India from British colonial rule during World War II. Subhas Chandra Bose and Tagore knew each other.)

I told Sugata that Tagore must have had a premonition while at Penang port, for today the federal government is privatising Penang port to a crony for private profit despite the Penang state government making it known that it wants to take over the port. Ah, human (and corporate) greed, don’t we know all about it.

This was Tagore’s itinerary in Penang in 1927. He even spoke at Chung Ling High School.
Penang
Saturday, 13 August 1927
Arrived by train. Greeted by Mr. H.C. Bathurst, Deputy Controller of Labour.

Sunday, 14 August
Laid the foundation stone of the new Hu Yew Seah building in Madras Lane. The Hu Yew Seah Chinese Club gave a public reception at which the leading members of every community were present. Tagore spoke about his visit to China, and how Asia was a birthplace of the great religions of the world.

Lecture at Chung Ling High School, where the headmasters and schoolteachers of the various Chinese schools in Penang were assembled.

The Indian community of Penang hosted a dinner for Tagore.

Tuesday, 16 August
Gave a lecture described by Suniti Chatterji as the “best public lecture of the poet in Malaya”. Took a trip around the island before leaving in the afternoon on the SS Kuala for Belawan, Medan. Before he left, Tagore gave the ‘Straits Echo’ a message and wrote a letter of thanks to the ‘Malacca Observer’.

For the full itinerary of Tagore’s visit to Singapore and Malaya: Check out this pdf file of the ‘Selected speeches and writings of Rabindranath Tagore’, the Nalanda-Sriwijaya Centre at the Institute of Southeast Asian Studies, Singapore

Tagore received the Nobel Prize in literature in 1913 for his poetic work ‘Gitanjali’.

Is Tagore relevant to us today? Of course. A future of rich cultural diversity, acceptance of each other’s culture, can be greatly helped by going back to the genius and creativity of Rabindranath Tagore, writes Lawrence Surendra in this article in Aliran Monthly.

Sugata Bose wrote another paper on the universalism of Tagore.

Wow. This is something new to me. I never knew of Tagore’s trips to Penang. And the first thing he commented was on the greed that plagues humanity. Timeless observation.

Those were the days when we attended Bahasa Malaysia tuition at the HYS building and my teacher was Cikgu Yassin who teaches at Caunter Hall Road. God bless his soul.

At that time, Asians were waking up to what colonialism by both Europeans and Japan was doing to them. With the enemy gone, focus returned to Indian vs Chinese, this type of indian vs that, etc.

Madras Lane was once a quaint part of innercity George Town. Famed for its copra mill (that’s how it’s called Yew Kar Lor, Hokkien for copra mill lane), you would find a row of prewar houses, 2 sundry shops, a swiftlet rendezvous, a dentist home, Chin Kang Hoay Kuan (Chinese association), Hu Yew Seah Chinese Primary School, a Methodist church, Telekom, government servant quarters & a short cut to a Jewish cemetery (at Jalan Zainal Abidin). Hu Yew Seah was once a BM tuition centre (at the new wing on the right) popular among the students of the 70’s. Come… Read more »