This magnificent if poignant video (above) was made under the Pulau Jerejak natural and cultural heritage asset survey and public awareness programme supported by Think City.

It discusses an almost 100-year era between 1871 till 1969 when Pulau Jerejak served as a leprosy colony. Photo credits: Mike Gibby and Rexy. Videography: Mike Gibby.

There is a second video (below) – Jerejak: Witness to history

And to think they want to build 1,200 luxurious homes, luxury hotels, a marina, a theme park on 80 acres ie much of the flat land on the island – plus, of all things, a four-lane bridge linking Pulau Jerejak to Penang Island.

Let’s see how they handle the forests and the heritage buildings and sites and the over-5,300 graves on the island. These must be preserved.

So far, none of the business ventures on the island has prospered. Even the shipyard land has been put up for sale.

The above videos were screened at a recent forum on Jerejak: 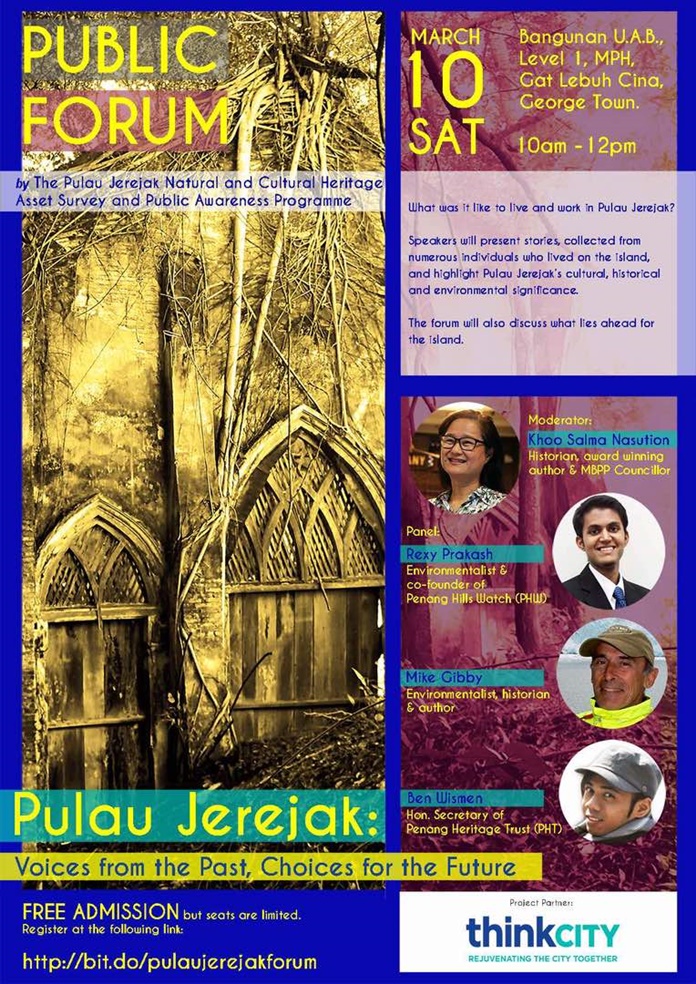 In 1986 on a Saturday morning, I together with my camping-kaki friends went to the War Museum site which at that time was a fort overcame by the forest. It was accessible to the public (anytime) & not commercialised then. We found: – Underground tunnels of about 2 feet wide fit for small sized guys to climb down the dark cool shafts & crawl inside to exit out the other way. – A huge well-like opening of about 12 ft diameter with a climb-down iron wrought ladder which led to another tunnel leading out to sea. An escape passage? It… Read more »

Ah pek why dont write history on indon confrontation against formation of malaysia by dr sukarno with 4 wives? Ah pek no received call up by miltary ready for basic military training? More adventurious than p. Jerejak. Many of your down under mates? Ah pek did not feel 2nd class to be call up?

Is your story verified by nusantara historian?

You want to try your luck going there at night during Hungry Ghost Month. I can guide you there F.OC. but no guarantee of you coming out sane & proper!
One experiment: go inside the gallow & stare at General Yamashita’s photo.

You are a good story teller, don’t waste your talent. Write fairy tales of Malaysia.

Ah pek, this trip no guarantee. Other trips 110% guarantee?

Kay bo? Pls ask NK for cat’s oil to bring out some courage!

Oredi kp. What yr lau yah going to do?

Go there & ask the old time residents, the eye witnesses of atrocities by the Japs (if any left due to rapid development) to verify what I said. Or go to the famous sea food restaurant with Cheng Ho’s giant footprint (near the jetty for boats plying to Pulau jerejak) & ask those old timers there. If all else fail, try your good luck during Hungry Ghost Month camping in the forest near Penang War Museum. Don’t forget to bring food offerings, paper offerings + try to capture paranormal activities with infra-red camera. Best to engage a sifu with spiritual… Read more »

It will be tears of joy for anyone who can find Yamashita Gold buried somewhere at Jerejak….

🙂 🙂 🙂 I like that sense of humour.
But some may take this as another fairy tale!
What a lousy life imagining just fairy tales instead of daring to go out to discover the real things.

if Gerakan is the government, you bet Jerejak will be plastered with illegal posters like Ah Long ads.

Indonesia–Malaysia confrontation, my personal vivid recollection: I was just a small pre-school child when it all started. Almost everyday, APC vehicles (Armoured personnel carrier) roared down Macalister Road on routine patrols. One could hear those huge all terrain tyres roaring down (& ripping?) the tarred road from a distance. Routinely, at the start of a siren, we school children were escorted to the Francis Light primary school field & instructed to lay flat face down on the grass for almost 5 minutes to simulate emergency safety practice during an air raid by enemy forces. That routine exercise was practiced for… Read more »

No pg kia call up and report to manpower? My elderly relative said All chinese including those china born were called to report. Tengku desperate for all he man and no say class or no class rakyat. Anytime, if confrontation gets serious, they will be asked to go for basic military training like those singland ns servicemen. Indon jump boats in pontian and parachute over Labis. The indon spies as they did not wear uniform bombed singland and were hanged by sing gomen. Indo very mad but not mad when malaysia kill those landed in malaya. With so many seniors… Read more »

What is BN’s plan for Jerejak if it regains Penang?

Langkawi island being cursed by Mahsuri (per tales) for many generations before being tourist destination, so someone may refer to Jerejak tales whether there were WW2 Japanese curses that could deter economic activities on Jerejak.

Jokes aside. If I am given the privilage to develop Jerjak (Jerejak) I would preserved its natural environment, built a cable bridge or cable car to go on top of Jerjak Pick, jogging track and hiking track and all sort of physical activities on the island less challet, homestay or even hotel. I would beautify the beaches and preserved its natural beauty to cater the Developed Country to see what and how the developed and preserved beauty Penang can offer. Challet, homestay and hotels will be built along the beaches of Sea Gate and the Jerjak are will just hold… Read more »

You miss one favourite sports: angler fishing.
Tis the place to fish for Koay Kow (grouper) & Ang Cho along the rocky coast.
And also a spooky place if any angler is discernible enough not to respond to any voice.