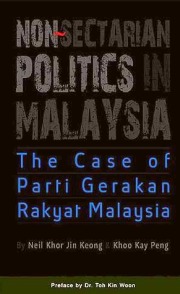 A book on Gerakan by Neil Khor and Khoo Kay Peng has stirred controversy – even before it can be launched.

“Non-sectarian politics in Malaysia: The case of Parti Gerakan Rakyat Malaysia” has already ruffled the feathers of certain quarters.

Respected Gerakan stalwart Toh Kin Woon, a life member of the party and currently director of Seri, penned the foreword to the book.

…the authors of the book, explain how since joining the Barisan Nasional (BN), Gerakan has increasingly lost its multi-ethnic character. It is increasingly perceived by many outside the party to be just another Chinese-based party. This book describes that slow but near fatal process both for the party and for non-sectarian politics in the country.

The grave-vine has it that the book has already upset certain quarters within Gerakan, which is due to hold party elections in October. From what I hear, there have been attempts to throw a spanner in the works ahead of the book launch.

Both the authors are from Penang and studied at St Xavier’s Institution. Cambridge graduate Neil Khor, a social historian and journalist, is a post-doctoral fellow at the History Department of University of Malaya while Khoo Kay Peng, former executive director of Sedar, is a corporate consultant and political analyst.

The book launch is scheduled for 4.00pm tomorrow at the E & O Hotel in Penang. It should be interesting – given the action behind the scenes!

Seriously. I wrote an email to MCA offering my services as a professional to help train young aspired youth in MCA for free. There was no reply at all to this date. It has been more than 3 months. Tells you what in the world is MCA good for.

If the book expose something that rakyat dont know, y not? Of course, if this exposes some top Gerakan’s guns secret action that has come out of the bag, sure KTK will reject it. He has a worried and stained face that show he is ashamed of being a … incompetent chief minister of Penang. KTK, pls explain to us, the rakyat about (the) land scam in public instead of beating around the bush with People’s Pact and Pakatan Rakyat leaders!!! We don’t like you in debate as you (seem to) have lied to the public!!!NO truth is given by… Read more »

In USA even an African American can get nomination for the next President of America over riding the culture racism. This together with the result of the recent Ptg Pauh election should inspire the nation to abandon the practice of sectarian politics. The future for every nation in these global age should be lead by the best and the brightest irrespective of creed and race like selection athletes for olympic games.Putting athletes based on race will never make it in any international arena. The victory of Obama hopefully will light up the flame of change in Malaysia.

romerz, Thks will go and get a copy 2molo

May I have your permission to add your blog to my blogroll?

Sure, please go ahead – Anil

Dear lpplmala, I got my copy last week at MPH for RM28/- I found the book quite informative on the history behind Gerakan’s formation and the reasons why the party did so badly at the recent 12GE. Towards the end of the book, I thought it was a bit unfair to blame it all on Koh Tsu Koon for the defeat as he was only acting president for less than a year. After all, he inherited a party fraught with factions from Lim Keng Yaik. Granted that he could have showed greater leadership to get the factions to toe the… Read more »

Ya with all the harp on the book I will definately going to purchase it. The more there want to suppress it, the more curious we are of the book and to show our support agaisnt suppression I am going to buy the book. Any inform on where to get the first edition of the book ?, Popular, Borders, MPH ?

Birds of same feather flock together. UMNO are the master racist of the country…. Did you guys feel the pain … when UMNO talk to PAS about ruling Selangor. Comeon! they just “sodomise” you guys and you all feel good about it. Wakeup before it is too late. The best opportunity for you to escape from the claws of evil is now. When the devils is weak. Koh Tsu Koon, you appears to be smart. Use your brain don’t sit on it.

Call it “YOUNG” instead of “NEW” brader.

Will the youngsters do crazy things ?

Gerakan fate is pure proof that over the years idealism of our founding fathers has been systematically killed. We are no longer the nation which our forebears wished and envisioned. Its up to Malaysian today to decide what we want to be and its urgent we do or our future will be dragged by this uncertainty. There is no longer any reason to even refer to the Constitution because 400 amendment makes it a laughing piece of crap. Either we go back to original intention OR we throw it out and decide. Those who don’t wish to be part of… Read more »

Not just hearsay but apparently legal action has commenced to get an injunction to stop the launch and sale of the book. Stupid move by the party leadership. You will only bring more attention to the book and it will instead make people only curious to read the contents. If the contents are so disagreeable to the party leadership, then come forth and debate against the contents and assumptions made by the authors. By taking this legal action, they are exposing their own weakness in being unable to counter whatever is claimed in the book. Worse still, it shows the… Read more »

“Both the authors are from Penang and studied at St Xavier’s Institution.”

Gerakan is a clone of MCA, the difference being it has managed to attract a more intellectual Chinese crowd to join its ranks. But in the end, the question is what’s the point of being intellectual and socially responsible if you’re not going to get grossly rich?

Join the devil and you become one. Get out before it is too late.