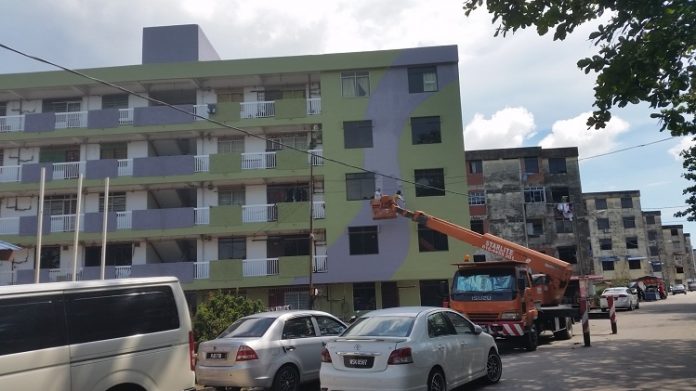 Great news! What a world of difference.

This was what the Taman Tun Dr Awang flats in Butterworth looked like before (see below) when I tweeted about it a month ago, after yet another foreign visitor, this time from Singapore, asked why the the powers that be were not doing anything about it.

Looks like neither BN Adun nor Pakatan govt can give the Taman Tun Dr Awang flats in Bworth a coat of paint. Sad. pic.twitter.com/hw7RWXFyOl

It was the latest reminder since this was highlighted here in 2012 when I compared these shabby flats with the luxury condos in Straits Quay directly across the channel.

A foreign worker told me that the painting was being carried out by a contractor. When I asked him who had engaged the contractor, he replied, “PDC (Penang Development Corporation).”

I asked a former MPSP councillor and he said the flats were under the responsibility of the PDC.

If so, well done to the PDC for this long overdue coat of paint, which should do wonders for the morale and self-esteem of the residents here.

I believe the flats lie in an Umno-BN state assembly constituency under an Umno-BN parliamentary seat. So double credit to the PDC for giving this place a first coat of paint in three or four decades. (And it’s not even an election year!)

This whole area can be easily spruced up even further if clogged drains are cleared and new large rubbish containers are provided for the bin rooms on the ground floor.

If anything, Taman Tun Dr Awang can be a showcase of what is possible in the entire state. I hope the state government/PDC and MPSP will take up the challenge.

How about Rifle Range Flat and Noordin Street Flat? They look old and dirty need to have a new coat of painting too.

The Real Estate and Housing Developers’ Association (Rehda) has urged Penang state government to do away with requirement for developers to build low-cost housing.

What say you Penangites?

Compensation of RM42K extra from ideal developer for koperasi folks for land acquiescence airport of Bayan lepas Penang. Durian runtoh for operandi families as they have been given bungalows on top of extra benefits. No wonder Ideal condo eventually not cheap to absorb such compensation.

Do you have the link for this news report?

Pg state gomen, don’t play into the tricky hands of these greedy developers. Even if you need the funds via swap deals to develop Penang into a global city. Think of other options like setting up an investor fund for state development purposes. PDC & InvestPenang should think out of the box. Economic conditions in dire straits already. Karma will definitely ‘punish’ them in due time like no sales, no money, no opportunity in the Forbes Magazine’s list of the richest fellas. Housing is more of a (majority) social need than (limited) want of the 1%. Build beyond mere showcasing… Read more »

Do the residents pay monthly maintenance fees to upkeep the flats?

That’s the problem. Residents’ maintenance committees are not always well run. Not all are able to pay up on time. Even at high-end condos, not everyone pays up on time, what more if they are low-income residents.

One option is to follow the Singapore model where HDB maintenance fees are paid to the local councils, which in turn are responsible for financing the maintenance. Any other options?

Singapore town councils are linked with the political parties of the constituencies. If you do not pay up the maintenance fees, your utilities (rlectricity and water supply) will be cut off.

This is the way to Taman Pelangi in Juru. After the Penang Bridge, go south along the North-South highway. Exit at Juru exit, turn right until towards Jalan Perusahaan. At the end of the road turn right into Jalan Perusahaan. Autocity is on the left side of this road. At the next traffic lights junction, turn left. A short distance, on the right side, is Taman Pelangi. These are five storey flats which were built by PDC in the mid 90s. The place has been a total neglect. Most of the residents are foreigners.

OK, will check it out when I can. Thanks, LCP. If you live around there, can you take a couple of pics and submit at the link on top of this page?

Sorry, I do not live around there, but used to go there once in a while

Well the state gov has been repainting and ‘rejuvenating’ various low-cost flats in the state, both on island and mainland. Some even getting upgraded lifts!

Yes, Anil is Penang’s pride !!! Penang people are very fortunate to have Anil as their blogger !!!

How nice if each and everyone of us can do a tiny part like report the bad condition of the road concerned either to the Adun of that constituency or to the state council.

Yes, the low income earners most of them can hardly survive, let alone paying maintenance fee, however low. Cant PDC take over ? However, to make a place clean it is everyone’s responsibility !!!

Yes, everyone should report things that are lacking. The councils have online complaint forms, so it is easier. If that doesn’t work, highlight on social media. People will take note, and things can change.

Repainting is not cheap. How long can a paint last? What more when the paint is directly exposed to human contact? Fair face bricks should be used although it cost a bit more. It is paint free for the rest of the life.

Could have been much cheaper to repaint 2-3 years ago before our Ringgit dropped and before Najib’s GST.
It is now very expensive to buy a can of paint.

And yes ,clogged drains & gutter must be cleared

And hope the paint quality is good as these flats are facing the sea.

My condo of 20 floors full paint job 2 years ago cost RM250k, and expect more due to inflation or punctuation of ringgit. Fyi so these dwellers are indeed lucky thanks to Anil’s publicity

In other words, Anil Netto is now an influential blogger whose twit could effect change.

Not really! It took three years of highlighting the place.

God bless you, Anil.
May Karma add good credits to your life’s account.

You may also want to check on Taman Pelangi at Juru, next to Autocity. It could be in worse condition

Thanks, do you have a Google Map link to the precise location?

Thanks. Along which road in Taman Pelangi are the flats located?