The Penang Island City Council has REJECTED a massive project at the Penang Turf Club on various grounds – but concerned residents and Penangites are not letting down their guard.

The rejection comes on the heels of a petition dated 31 October 2016 by nearby residents expressing strong objections to the project.

The project involves the following:

In a letter dated 24 January 2017, the City Council said it was rejecting the project based on the following grounds:

But one concerned Penangite warned that it was too early to celebrate. The developer could attempt to work on and around these grounds for rejection and submit a fresh plan.

She also noted that the notification of rejection doesn’t mention anything about the project site obstructing natural waterways, which was among the concerns of the Jesselton residents.

Neither did the notification of the rejection mention anything about the impact of the additional traffic from 2,226 new parking bays and 5,000 additional residents on the entire vicinity.

The following should be considered:

Is the retention pond for water run-off from the diverted streams in the Batu Gantung area sufficient? Or is it only sufficient for the needs of the area under development?

What about the other tributaries and water sources from above? Has the impact of all the flooding risks been fully considered?

Is it true that the JPS has asked the United Hokkien Cemeteries for extra retention areas and that they have refused? Will JPS approve the drainage plan in any case?

Has this been done? Apparently, during the objection hearing, this was requested for. Could civil society groups like Penang Forum have a look?

The approval for the hill cutting was apparently based on bungalow lots in the original plan. But that was then. Now, the density has apparently been increased and there are high-rise blocks planned. 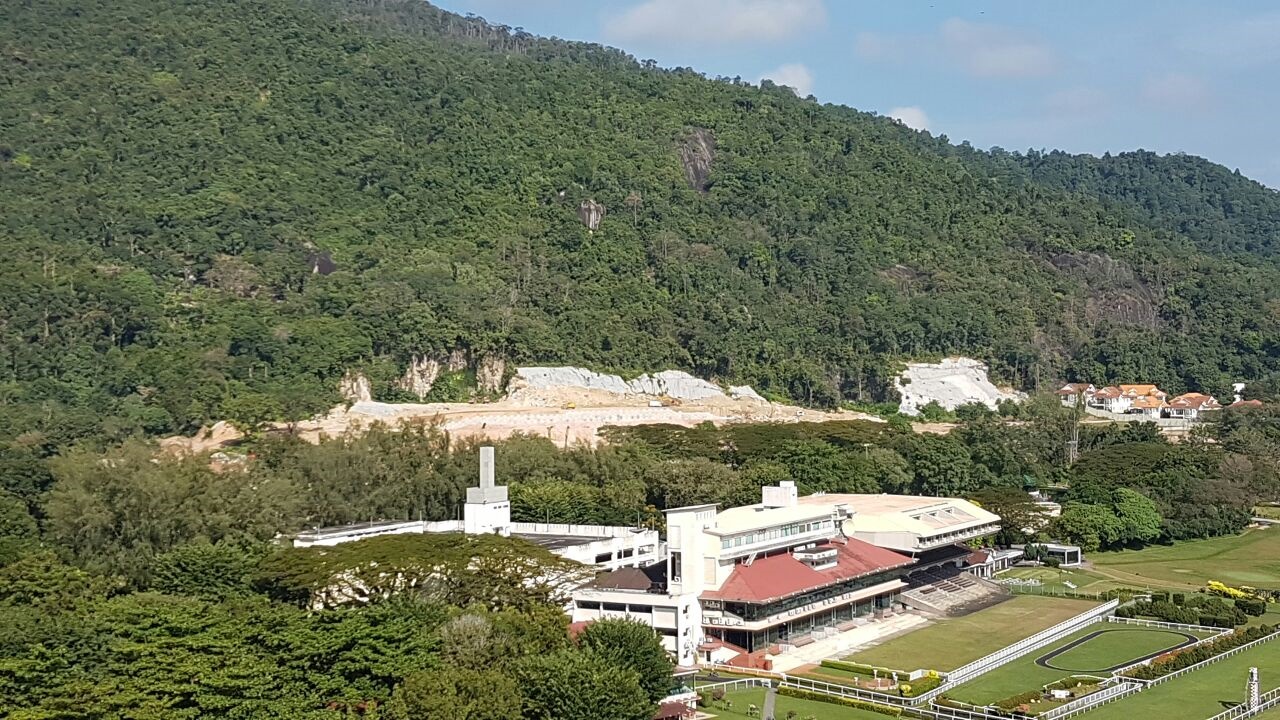 The revised plan has not yet been approved. But hill-cutting continued relentlessly, badly scarring the hill-side.

Many trees have been removed

How many trees have already been removed? About 500?

Where have they been replanted? And how many have survived.

It was only in 2007-2008 that Penangites campaigned hard to save the Turf Club land from the massive development planned under the Penang Global City Centre project – only for this to happen now.

How is it possible that public land that was originally given to the Turf Club for a nominal sum for public recreational purposes is now being developed for huge private profits?

See how a valuable public asset – part of the Commons – has over the years been turned into a private development. How much has the state or MBPP – ie the people – received in return compared to the profits that private interests stand to reap? Can any value adequately make up for the loss of such a treasure?

Penang to sell 20 acres of land to build churches, temples

Non-Muslim organisations are offered to buy the plots of land from the state government, he added.

Lim said the leasehold land in Bagan, Butterworth, have been demarcated into 32 lots of different sizes for the purpose.

Family-run coffee shop forced to close after 67 years Read more at http://www.thestar.com.my/news/nation/2017/03/01/familyrun-coffee-shop-forced-to-close-after-67-years/#V5Przt2fLkLRyfeq.99 GEORGE TOWN: It will be tough for the Teoh siblings if they stop operating the traditional family-run coffee shop business established by their late father 67 years ago. Sisters Teoh Ai Tin, 67, and Ai Ling, 61, together with their brother Keng Wah, 56, grew up helping out at the Wah Keong Coffee Shop located at the Malay Street Ghaut-Beach Street junction. The three inherited the business after their father It Chin passed away some 30 years ago. They are dependent on the coffee shop, which sells… Read more »

Traditional kopitiams need to revamp to attract new (younger?) customers to stay afloat and to compete with the likes of Starbucks. Need to create cosy environment (soft lighting), soft music and provide wifi to attract young crowd that is willing to pay premium price for a cup of coffee.

The stark reality of modern Penang a bitter pill to swallow] for traditionalists. Foremost must blame the parents for not inculcating traditional values of vintage trades to younger children. Young parents of past 1-2 decades majority of them on weekends schoolchildren to frequent air con malls to taste franchised comfort fast food, so these children grow up so used to modern processed meals that they prefer trendy stuffs. Typical teens or twenties b4 the financial pressure of being parents go for Teaalive Chachatime over traditional herbal tea, or Starrybuckish coffee over kopi-o kau kau. Mau be traditionalists should start to… Read more »

Those old-styled cinema halls were replaced by modern cineplex with the latest amenities (dolby surround sound, digital screening 2D or 3D, comfortable cushioned seats). Unfortunately modern cafe will similarly displaced the old-styled kopitiams. This is the cruelty brought on by the passage of time and the change of consumer taste. What remains are nolstagia for the older generation and the millenial generation will never understand the feelings. Sigh!

Must keep up with time to survive else will be consigned to the museum. This is a sad reality.

the rental is not raised by singlsnd but by pg lang. if penang lang does not want to help how much more is investor from singland? why tua pek kong dont go and tell the owner off like telling komtar?

Learn from Singapore Ya Kun kopitiam that has revamped successfuuly.

Ya Kun Kaya Toast is a Singaporean chain of mass-market, retro-ambience cafes selling toast products (notably kaya toast), soft-boiled eggs and coffee. Founded by Loi Ah Koon in 1944, Ya Kun remained a small family-run stall for decades, but have expanded rapidly since Loi’s youngest son headed the business in 1999. They have over fifty outlets, mostly franchised, across six countries, and are a Singaporean cultural icon, known for their traditional brand identity and conservative, people-centric corporate culture.

Tunglang can be a disciple at YaKun, then return to PuloPinang to be the next pro-maelstrom rescuing the dying traditional kopitiam by becoming a franchisor.

The usual follow-up tricks fascists employ for a project they have already set their minds on include these:
– claiming investment, development or jobs, none of which they spell out.
– creating distractions.
– waiting for those “making noise” to tire.
– bringing back the project with superficial changes.

Time to ‘Let it go’ in Malaysia?

Felda is selling off its UK properties.
FGV to cut 3% of workforce.

Petronas is selling 50% of Rapid Pengerang stake to Saudi Aramco.

Proton will soon sell 51% of its holdings to Geeky China.

Petronas (allegedly) sold out to Saudi Aramco, but Umno TV3 reported as Saudi’s investment in MOU. BN is desperate for cash, expect more national assets to be sold.

Vincent Tan was trying to test the market. Unfortunately China and Arab buyers are not interested in small teams like Cardiff FC.

Geely China will likely use Proton Malaysian facilities to build Volvo cars, so the end is near for Proton once it is sold to Geely.

FGV a listed public company collected RM 6 billion from the public on an initial public offering. They then misappropriated RM 1.7 billion and paid Felda settlers in the thousands RM 15,000 each gratis. The previous AG Gani Patail and the relevant authorities closed one eye. All the shareholders lost a lot of money. The country as a whole suffered grossly. Even EPF is paying lower dividends now.

Off topic here. You can put comments like this under Readers Alerts.

Are you (too) sure property development always lead to growth of businesses? EXCLUSIVE: Rapid development gives birth to ‘ghost towns’ https://sg.news.yahoo.com/exclusive-rapid-development-gives-birth-201206004.html A number of commercial projects around the nation resemble ghost towns, with swathes of vacant shop lots. Besides being an eyesore, they also serve as breeding grounds for mosquitoes and other unsavoury activities as well as reflect negatively on economic growth. MALACCA: Rapid development here has led to a glut of commercial units, particularly shop houses, which are mushrooming into swathes of vacant shoplots. A registered valuer, who declined to be named, said sluggish development of existing large scale… Read more »

Bumiputera lots could be abused for personal gains as in the case of public housing scam in Johor that has implicated the Exco family:

Najib was trying to get MACC to get tough to spruce up Malaysia’s corrupted image? But we know the big shark is M01.

it is fine without Fine. you dont know the process starts from gilakan state gomen days and become part of procedure. you sleeping and should have roost early. you another sandiwara

mother of all stupidest reply and with your comments houses last 30 years. TOL? LH is more than 5O years and FH forever. as long as tua pek kong.

How is it possible that public land that was originally given to the Turf Club for a nominal sum for public recreational purposes is now being developed for huge private profits? The members of the Turf Club have benefited enormously with some of them purchasing their part of Turf Club land to build their own bungalows near to Jalan Scotland and Jalan Skipton.