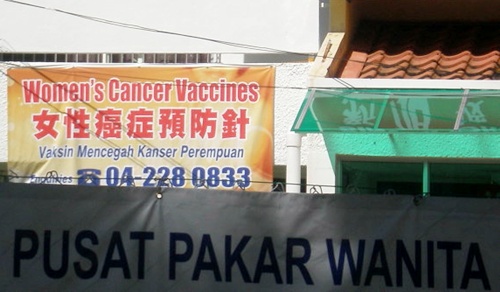 Photo by a concerned Penangite

A concerned Penangite spotted this banner at a private clinic along Burma Road, openly advertising a vaccine against “women’s cancer”. She called up the clinic and was told the vaccine would be delivered in three doses over a six-month period, RM250 each dose, total RM750. The vaccine is Gardasil (supposed to be a cervical cancer vaccine) and girls as young as nine could receive the vaccine, said the person at the other end of the line.

Check out the folowing reports:

Cancers that are closely linked to certain behaviors are the easiest to prevent. If you are a current tobacco user, quitting can still greatly reduce your chances of getting cancer. The most important preventive measure you can take to avoid lung cancer is to quit smoking. Many products such as nicotine gum, nicotine sprays, nicotine inhalers have been successfully used to help people trying to quit smoking.

Get more info about cancer from this blog,
Treatments For Cancer

Dr. Donald Miller MD a cardiac surgeon in the U.S. recommends: * No vaccinations until a child is two years old. * No vaccines should be given to a sick child or one who has taken antibiotics recently. * No vaccines containing thimerosal, which is 50 percent mercury; * No live virus vaccines (except for smallpox, should it recur). This includes the combined measles, mumps, and rubella (MMR) vaccine; chickenpox (varicella) vaccine; and the live-virus polio (Sabin) vaccine. * Vaccines, if given after the age of two, should be injected only one at a time, no more than once every… Read more »

America doesn’t bother about the swine flu, the proof is from the number of returns students diagnosted with H1N1. All are gimmicks of drug companies to sell their stupid drugs. Most foriegners in US will not go for western medicine treatment because it will cost you a fortune, a lot of them go for alternative treatment. How wide spread is the H1N1 is just for you to guess. Those seeking alternative treatment will not die, if you take anti-biotic you most likely will die.

More scary information about vaccines and the untold truth of vested interests :

To the ancient people, cancers are caused by lack of Ki energy, all you need to do is a proper upper body exercise without excessive sweat. The exercise should be in slow motion until your upper body feel the warmness, not neccessary need to sweat. Sweat is bad for Ki as it will dissipate your Ki. Easy way but close to impossible to practise is to crawl like a baby. Modern people tend to exercise their lower body, I just wonder whether their lung and heart hang between their legs with their brain in the a**. They just go for… Read more »

Hi Woody,
There is one, just make them crawl out of their office like a d..

Andrew, I can perscribe the most wonder vaccine against all type of cancers ever found in the world. All you need to do is spend a couple of minutes each day to crawl like baby until your upper body is warm. All cancers will disappear by itself. You can’t buy your health. You need to earn it with a bit of sweat, but not over sweat pls!

Japan’s reduction in infant death was due to the change in schedule of giving the vaccine at age 2. Before that age it had been shown repeatedly to cause sudden infant death or crib death.

When australia no longer made vaccination mandatory 50% of the parents of new born babies did not accede to vaccination. Coincidentally the SID rate also dropped 50% at that point.

The link to autism, while many studies had came out to disclaim association in recent days, many studies continued to be linked with it.

Here is a link to learn more about vaccines:

When you Google search “Gardasil Death” – you get 136,000 hits.
It says a lot about this growing product safety controversy.

Do we have vaccine that prevent corrupt politicians ? Like it will drop dead in its own when enter public office. 🙂

Wow… if Gardasil can prevent 95% of ALL cervical cancer… I suppose from the MEDICAL POINT OF VIEW, a vaccine for ALL cancer is next on the agenda to save this time the male population as well.

Gardasil is a dangerous scam cloak in good intentions.

I am no doctor but the person who wrote the following article is.

Either brain dead or $$$$$$$$ vengeance to claw back tuition fee investments.

So this is the logic:

Maybe that ONE virus which causes prostrate cancer is waiting to be miraculously discovered and the miracle vaccine in the patents office will save all mankind from prostrate cancer.

Frankly I think, many doctors have become quite brain dead probably because they have spent the best part of their lives reading drug catalogues.

As far as prevention of diseases are concerned, Homeopathy prophylaxis is the safest. It is cheap and the best for the third world countries.

You can see this research done by some medical doctors in Cuba to prevent Leptospirosis(swamp fever) during hurricane season.

As a GP in Sydney, I’ve given Gardasil to many patients in my clinic for the last one year. It is provided free by the government to all girls in high school and women up to 26 years old and is effective in preventing genital warts and 95% of all cervical cancer.

So far, I’ve seen no side-effects from this vaccine. However, some girls may faint during the procedure due to fear of the injection. This is the experience shared by all GPs in Australia.

From the medical point of view, this vaccine is highly recommended.

Just forget about all those drug-related substances as many Malaysians do not know so much about the side effects that come along with such so-called preventive medicines.

Western drugs or medicines merely suppress cancer just as chemotherapy. Their side effects is beyond redemption. it is like out of the frying pan into the fire.

Whatever such claims they may have, it is best to adopt natural sources. Instead. see this website for cancer cures….the natural way via a world-wide patented natural product

As I always say…..Malaysia is now lawless. Put up any banner you like, make any claims you want, park anywhere you like…..when the enforcement folks come along…….$$$$$ selesai everything.
(I believe) this clinic is also run from a residential premise. MPPP has not taken any action…what more a small banner!

As someone who’s directly involved in the work on vaccine development, I believe there are values in a cervical cancer vaccine. The vaccine is against Human Papillomavirus (HPV) a virus that causes warts, including genital warts. Some of the strains of this particular virus, when introduced to a female sexual reproductive organ would eventually cause cervical cancer. I shall not talk about the different manufacturers so I won’t be accused of promoting a certain product. The reason why the vaccination is to be started at a young age for girls is to trigger the recipients’ immune system to have antibodies… Read more »

Hi Anil, can you please also warn the public about the Live Blood Analysis scam being run by quack doctors and sinsehs in Malaysia. From wikipedia: “Live blood analysis (LBA), sometimes called live cell analysis, is a process in alternative medicine which involves high-resolution observation of live blood cells using dark field microscopy. The procedure consists of taking a drop of blood from the patient’s fingertip, putting on a glass slide, and viewing it via a microscope on a video screen. Live blood analysis is an unestablished diagnostic test promoted by some alternative medicine practitioners, who assert that it can… Read more »

http://www.fda.gov/BiologicsBloodVaccines/Vaccines/ApprovedProducts/ucm111280.htm Page Last Updated: 04/30/2009 QUOTE Based on the review of available information by FDA and CDC, Gardasil continues to be safe and effective, and its benefits continue to outweigh its risks. CDC has not changed its recommendations for use of Gardasil. FDA has not made any changes to the prescribing information for how the vaccine is used or to the vaccine’s Precautions. In addition, FDA routinely reviews manufacturing information, and has not identified any issues affecting the safety, purity and potency of Gardasil. http://www.tga.gov.au/alerts/medicines/gardasil.htm Updated 5 May 2009 QUOTE No deaths occurring after Gardasil have been reported in Australia… Read more »

Those who claim to sell ethical drugs have in the past hidden medical facts from the FDA and the public. Merck did not disclose all the info with Vioxx, then the side-effects/contraindications surface and the drug pulled out of the market. Most injection, certainly vaccines have even more side-effects, ranging from mild, transient symptoms which do go away eventually to moderate and severe. Some life-saving drugs also present the same profile. The most important thing is to disclose all the evidence for and against it. Then the benefit vs side-effect profile can be analysed objectively. From my experience, there are… Read more »