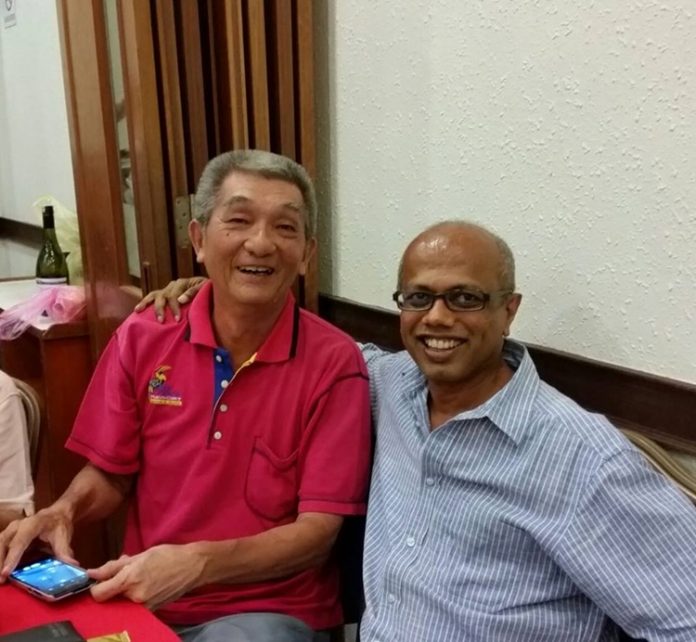 When I was a kid, my ambition was to become an All-England badminton champ. Sadly, I never made it past the older guys to become local street champ, and my budding badminton career soon faded. But coming face-to-face with my boyhood scrapbook hero, Tan Aik Huang, 1966 All-England champ and 1967 Thomas Cup winner, has more than made up for my unfulfilled dream.

And this was the final, where Aik Huang trounced Masao Akiyama of Japan:

This triumph took place in an era when a galaxy of stars – Erland Kops, Svend Pri, Tan Aik Huang and Rudy Hartono – ruled the roost.

If the 1966-67 story was turned into a movie, it would definitely give Ola Bola a run for its money! Ever modest, Aik Huang, however, felt that Malaysians would be better able to relate to a movie depiction of the more recent 1992 Thomas Cup victory instead. Read: What next after Ola Bola? Wanton Badminton?

But there’s a story waiting to be told to a new generation of Malaysians about the sheer grit, sacrifice and courage that went into that magnificent 6-3 Thomas Cup victory in the intimidating cauldron of the Istora Senoyan Stadium.

You are still a champion Anil Netto

Where is the Datukship for this hero? Others who have contributed less for our nation glory easily got the recognition and awards.

If you are a multiple world champion, do you really need any local award – though of course it would be nice to have your efforts recognised by your own country.

A true badminton hero will never get knocked out in the first round in the All-England.

You are a believer of these … titleships ?

These days badminton player like Lee Chong Wei going into Housing Development projects, not sure if he cares to build affordable humble homes at Bukit Mertajam upon his retirement after Olympics?

Now you know why Chong Wei is a MCA member … to get biz contract(?)

Astro Shaw could engage Anil as a scriptwriter or consultant should they wish to film Ola Badminton.

LCW can always call Rosmah for morale boosting tip before playing Lin Dan, in his quest for the elusive Gold in the Olynmpics.
http://www.badminton-information.com/chong-wei-called-rosmah-to-boost-his-morale.html

Rosmah is more important to Datuk Lee than hiw own parents. Father was not invited to his wedding while mother cannot sit at the same wedding table with him but Rosmah can. Datuk Lee is no hero to me. He has set not good example to Kingston Lee.

Jelutong kid, is he really that bad ar ? No wonder i really hate his face…

O ya where is saw swee leong ?

Tan Yee Khan too. There is also Tan Aik Mong.

How about James Selveraj, Saw Swee Leong, and my Sia Boey’s champion of 1970s named TuaKeeLan?