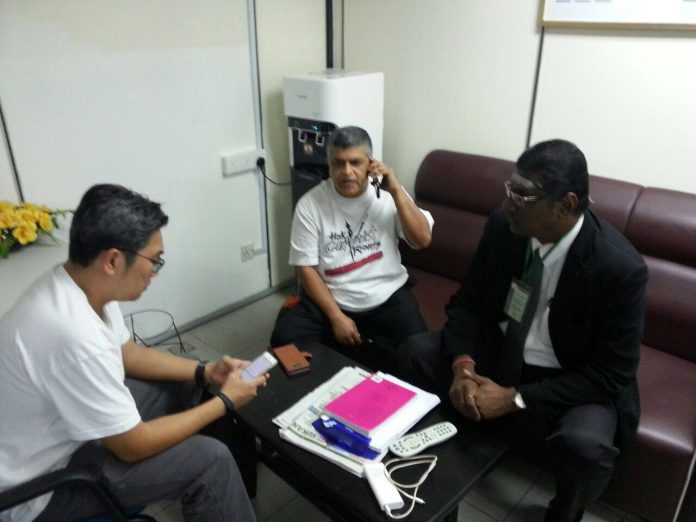 Imagine that. His cartoon exhibition was disrupted by a pro-Umno mob yesterday but it was Zunar who was arrested this evening for investigations for sedition and under Section 504 of the Penal Code (for insult or whatever) after reports were lodged against him.

The mob had no business disrupting his exhibition in the first place. I don’t understand this. If they were not happy with his cartoons, just stay away from the exhibition.

Arresting Zunar, in effect, rewards the mob for taking the law into their own hands.

Now, Zunar’s cartoon displays could be confiscated. Zunar already faces nine sedition charges, which could put him in jail for 43 years if he is found guilty, and a travel ban. This must be something of a global record for a cartoonist. Whither freedom of expression?

Night has fallen in Penang and the rain is pelting down as I write. I am upset. I was supposed to catch up with Zunar this evening with a couple of friends – and this happens.

Poor Zunar! The trials and tribulations he has to face just to exercise his artistic creativity and his basic right to freedom of expression. But knowing this amazing guy and his indomitable spirit, I have no doubt he will live up to his pledge that he will draw until the last drop of his ink.

Let us pray for Zunar’s – and Maria’s – quick release and for all charges to be dropped. Until then, we will continue to light our candles to symbolise the light of freedom and justice that can never be extinguished.

We are becoming (if not already) like an Arab country where a rape victim was arrested when she reported the crime instead of the rapist. Law and order has been turned upside down by those in power.

Getting to be like the Thailand’s military government and the Communist government.
Encik Zunar and Madam Maria got arrested.
But there are good news behind such bad news.
It look like Mahathir is winning another round.

Don’t be so quick to condemn these “totalitarian” regimes. When there is a major crisis, they scramble because they do not have the luxury of pointing fingers at others. China has managed to extradite big criminals who were hiding in a certain “great democracy” for years. It has already made a significant mark in global GHG by implementing a stupendous amount of infrastructure for renewables. When there is a natural disaster, it takes immediate, concrete action. The great democracy cannot act because a big portion of its bribed legislators deny climate change – against the will of most state and… Read more »

In the artist fraternity, Zunar will be remembered as the “Che Guevara” of Malaysian socio-political expressions without fear or favour or Dedak Rm50.00.

I’m confident he’ll be at the book launch.