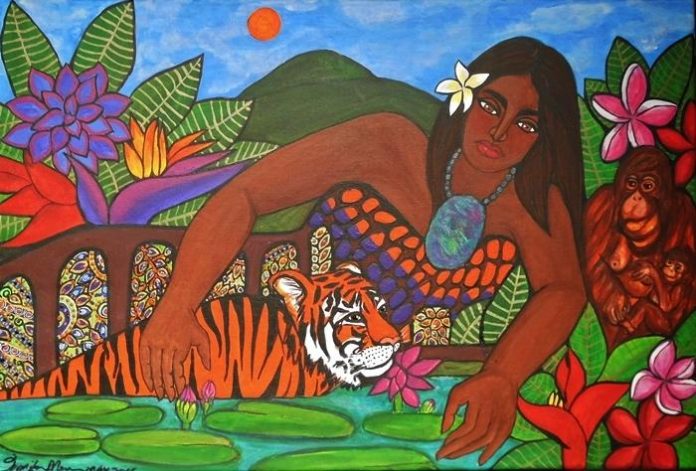 A Mixed Group Exhibition is being held at the Hin Bus Depot Art Centre along Jalan Gurdwara in Penang until 10 October.

In our materialistic capitalistic world, we need more artists, poets, musicians, indie film producers, philosophers, cartoonists story-tellers and dreamers from the periphery – with a strong social message and alternative viewpoint – to point us to new possibilities.

So it is important to support the local arts scene. Among the work being exhibited by half a dozen artists at the Mixed Group Exhibition are three paintings from up-and-coming Penang-based artist Jennifer Mourin’s “Mother GAIA” series:

Reflecting on how our earth is exploited and violated – and how animals are cruelly abused and hunted to death/near extinction – her new paintings challenge humankind’s maltreatment of animals, and the destruction of our Mother GAIA.  The “Mother Gaia” series imbibes the need to take stock of what we are sacrificing in the name of greed, mal-development and over-consumption.

These new paintings assert the need to respect, protect and defend our planet and her progeny against abuse, exploitation, depletion and death. Jennifer’s personification of Mother Earth/GAIA in the women she paints surrounded by the animals facing extinction stares people in the eye, calling for people to change, for the killings to stop!

A feature in Life & Soul describes Jennifer as follows:

Working with gouache, acrylic and oils, her art features and celebrates strong women in all facets of their daily lives – women responding to the on-going changes in their environment and communities, women seeking spiritual balance and love, women as care-givers of mother earth, as monitors of the development affecting her environment, and as resisters of destruction.

Themes of motherhood and nurturing feature heavily across Jennifer Mourin’s art, where bold colours, curvaceous figures and spiritual messages unequivocally converge in this playground of life through the eyes of Mourin herself. An ode to Mother Earth or Gaia.

“Gaia is all around me,” states the Malaysian-born Jennifer Mourin. “Overlooking the hills near where I live there are red spots. You see all the red earth – it’s like Gaia’s bleeding. It gets me mad when she is abused. There is a nurturing energy about being a woman. I see it in Mother Earth. But take care of her. She is sustaining us but humans trample on her constantly and for what – greed, vanity. There are red patches here [Malaysia] because people have cut trees, but why not replant what you take.”

Strong women are celebrated across Jennifer Mourin’s artwork and she is thankful for growing up in a family of strong matriarchs. With grandmothers of Thai origin on both her maternal and paternal side, Jennifer Mourin has been inspired by her mother’s Thai village in Kelantan, east Malaysia. She has even claimed the sarongs that the women in Kelantan wear as a totem for her identity and art. The beautifully coloured, batik-style prints feature heavily throughout her pieces.

Admission to the art exhibition is free.

Why pinch when I can punch? Malaysiakini interviews Zunar “Opportunity is not given to everyone to share their views simply because that’s precisely how the government wants to shape people’s minds. “For the same reason, we see our mainstream media covering dramas, concerts, sports and other entertainment programmes on TV, but important issues like 1MDB are not given space.” https://m.malaysiakini.com/columns/402008#IGv5GBykRr6EFEOL.99 Zunar adds that if the media were allowed to cover, review and analyse vital issues, Malaysians would be encouraged to take part in important discussions pertaining the state of the nation. “Sadly, we do not have that happening. In Malaysia,… Read more »

How might your life be better with less? MINIMALISM: A DOCUMENTARY ABOUT THE IMPORTANT THINGS examines the many flavors of minimalism by taking the audience inside the lives of minimalists from all walks of life—families, entrepreneurs, architects, artists, journalists, scientists, and even a former Wall Street broker—all of whom are striving to live a meaningful life with less.

Minimalism is a tool that can assist you in finding freedom. Freedom from fear. Freedom from worry. Freedom from overwhelm. Freedom from guilt. Freedom from depression. Freedom from the trappings of the consumer culture we’ve built our lives around. Real freedom. That doesn’t mean there’s anything inherently wrong with owning material possessions. Today’s problem seems to be the meaning we assign to our stuff: we tend to give too much meaning to our things, often forsaking our health, our relationships, our passions, our personal growth, and our desire to contribute beyond ourselves. Want to own a car or a house?… Read more »

Most expensive coffee in the world comes to Singapore
http://www.thestar.com.my/news/regional/2017/10/16/most-expensive-coffee-in-the-world-comes-to-singapore/#HryqGKBASMslO5eU.99

The coffee is a natural processed Geisha cultivated at 1,800m above sea level in the mountainous region of Boquete town in western Panama, a country in central America.

A single espresso-size cup of Esmerelda Geisha coffee will cost you S$85 (RM265).

Unrealistically high pricing for homes is adding to the grievances of Malaysians grappling with rising cost of living, as affordable housing becomes a key issue for the government of PM Najib to tackle.

According to Bank Negara Malaysia’s estimates, there is a current shortage of 960,000 units of affordable housing, with the number projected to reach one million units by 2020.

The central bank has refuted claims that limited access to financing is deterring home ownership, saying instead that the property industry should boost efforts to cut costs and accelerate supply.

Ringgit so low and building materials like steel all price go up. Have to wait for property bubble to burst? But when?

More likely for GST rate to go up than for the property price to go down.

Both property developers and buyers want to believe that the worse is over in the property sector but different risks, currency issues and the global environment challenges continue to weigh on the sector, says Real Estate and Housing Developers Association, Malaysia (Rehda). “Developers continue to hold back on launches and buyers are not buying although there is demand,” said Rehda president Datuk Fateh Iskandar Mohd Mansor. Speaking at the 20th National Housing & Property Summit 2017 on Thursday, he pointed out the laudable macro economic numbers are not translated into real numbers. Key challenges with regards consistency in policies, rising… Read more »

She have the strong will power and can’t be tamed like the tiger beside her but she can tamed the wild.Have her own way of thinking and very independent. The francapani and Heliconia plants might represent the nature like virgins jungle. Plenty of water serounding her with water lily.The painting is complete with nature where the mother earth is lacking now since Political Traders lack sincerity. Family ties her priority – the chimpaze family. rajraman.If the woman is the artis then she have very vibrant life.The color of the painting too strong as her. Anil,you have what she have but… Read more »

The Indian community will become victims if the government allows full meritocracy in the student intake at public universities, PM Najib said.

The meritocracy, which introduced 15 years ago by the then prime minister (Dr Mahathir), did not help the Indian community, Najib said when officiating the 25th annual general assembly of the Indian Progressive Front in Serdang today.

The Kutty the main culprits and its still continue.
But MO1 keep printing Blue Print.
Why you keep updating me like Weng about Political Traders Lies Jerome?

Still a week to go! But Happy Deepavali, all the same, Raj!

Thank you Anil, you make my day.Happy Deepavali to you too and all Malaysian. Social media normally wish any upcoming Festival in advance.Even Political Traders will put “Bunting” when comes to Festivals, but I don’t see any “Bunting” by PKR and DAP in my neighborhood for Deepavali. If Christmas, Chinese New Year and Hari Raya my neighborhood Political Traders will take a big signboard and wish in advance. Plenty of Indians staying in my neighborhood and voted Pakatan. Posh neighborhood, middle income, and lower-income Indians surroundings in this area. rajraman.https://www.youtube.com/watch?v=kLLCuPMpP0M Anyway, I boycotted Petronas oil long ago since the Chinese… Read more »

rajraman666, spread the greetings of Happy Deepavali!
Help bring the Light to destroy the Monster of Kleptocracy.
And ask every Malaysian Indian not to wish for saree, but justice, equality & progress for Indians.
NB: Saree won’t bring food to the tables, even if it’s free. Think about that, Indians.

YeahTunglang,
I read another Kutty giving saree to Indians in Kulim.

Raj666, I wish you success in getting 2-day Deepavali holidays from Najib.

You not wishing me Happy Deepavali Jerome but wishing IPF. Looks like I am a member of every Indian Party.

rajraman. I am on Holidays since 2016 till now because of Najib.He so good running Malaysia Economy until I was forced to retire early.

I hope the Indians can see the LIGHT in Deepavali and do not be confused thinking they are kingmakers in GE14. Already BN/MIC >50 years cannot improve the plight of poor Indians.

Arts can be too abstract for general public to appreciate. Arts can become the sought after showoffs like those Picasso paintings “bought” by Jho Low, even if they ever return from confiscation the locals think they are junk unless sell off to feed the stomachs of the poor.

Heng, I think you miss the salient point of art itself – paintings, drawings, sculptures, installations, digital art, music, dances, pottery, etc. You miss the human expressions of artists (as opposed to art made by artificial intelligence) which have emotions, meanings, messages or power to excite pure joy of appreciation. Anyone of us can be an artist, if not yet. Because we are human (in the image & embodiment of our Creator?). Since the first cave paintings of prehistoric origin, homosapiens had 5 senses to express what were in the simple minds, a biological ‘computer’ with emotions & creative power… Read more »

Today the comics by Zunar is an expression of ’emotions, meanings, messages or power to excite pure joy of appreciation’ of the political situation here.

I enjoy arts that are not syiok sendiri type.

Mural wall paintings can be art, and so are the drawings by Zunar.
Go to Asia Comic Museum if you like artistic expressions via comics.

Art an antidote to materialistic capitalism? It is a big, corupt business complete with fakes, money-laundering, theft, smuggling, fake tastes and keeping up with the Joneses. ISIL/Daesh engaged in plunder and sale of artefacts while pretending to blow them up. SEA and HK are major centres of fakes. Ivory-based art is killing elephants. Psychopaths who have made it big try to rehabilitate themselves by financing art, e.g. setting up art museums. Since at least the 1970s, good forgers have belied the claims of the connoisseurs.