Pakatan supporters held simultaneous protests in Penang, Perak, Selangor, Terengganu and Negri Sembilan against the federal government’s decision to issue a licence for sports betting in the country. 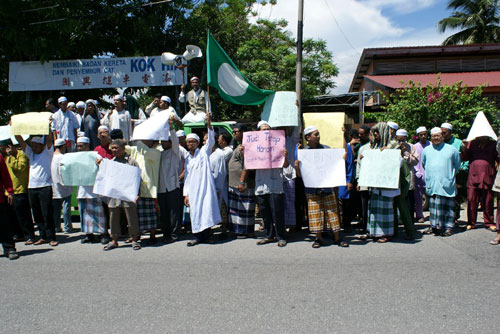 The protest in Penang, led by Penang Pas youth leaders took place after Friday prayers at the Kampung Permatang Jangus mosque in Permatang Pauh on the mainland. 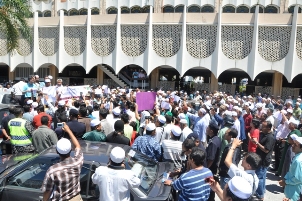 Over in Perak, about a thousand people, including Perak Pas and PKR youth leaders, gathered for a similar protest at the Sultan Idris Shah state mosque, reports Harakah (photo courtesy of Harakah).

In Negri Sembilan, some 100 people reportedly gathered near the state mosque while in Selangor, protests were held in Kajang, Hulu Langat and Kapar. Protesters also converged at the Pegadang Baru mosque in Kuala Terengganu.

A mammoth rally is planned for 3 July in Kuala Lumpur during which protesters hope to submit a memorandum to the Agong.

The award of the sports betting licence to Ascot – an overnight windfall for the firm and those behind it – is likely to be a political hot potato for Najib in the weeks ahead.

What about you? Do you agree with licensed sports betting?

well…
Gambling is not a religion issue only, but also unethical.. i don’t understand why people should relate muslim that involve with TOTO or so-and-so with legalization of gambling sport.. the actual issue is are we want to leave a disaster environment to our generation..
it is our responsibilities..

The campaigns against Sports betting must be intensified by all Pakatan parties, particularly PAS and PKR. This awareness protests currently being carried out will culminate on 3rd July. What the Muslims failed to understand till now is that they thought that this license is still a seasonal license for the World Cup, not knowing that EPL, La Liga and all professional leagues in the world can also be termed seasonal. Like the EPL which will commence on Aug 14th 2010 for the next season! As it is gambling is strictly forbidden in Islam, and the Malays in the kampungs especially… Read more »

Gambling addiction is the worst. The sky is the limit. Too much alcohol will get u drunk. Too much women will make u sick. Too much cigarette will make u vomit. But gambling had no limit. I personally know a few friends who gamble till they took loan from loan sharks. The govt made a very bad decision this time

It is very simple for me. I cannot be a hypocrite and object against legalized Sports betting.
However, my moral convictions are stronger. I am not going to punt a single Sen, and contribute to UMNO’s war chest.

Where are the familiar faces leading these kinds of PROTESs? Where is KHIARY, ZUL NORDIN, MUKHRIZ, KHIR TOYO, ALI RUSTAM etc? You people are ‘TRUE MUSLIMs’ right? Why are you all keeping quiet? Why are u people not with the other MUSLIMs brothers who voice the discontent on this UNISLAMIC move (awarding a new betting license on soccer)GAMBLING by your party’s President who is also a MUSLIM? If this is allowed, why not award GAMBLING LICENSE on all BUY-ELECTIONs and the next GE as well your own party polls? I am happy to bet on the winners.

Another article in BM related to sports betting protests:

p/s: please look at comments by Osama. He offered a lot of protest reasons. By the way, he has difficulty to translate from English to BM. Dear O or anyone else, can you please help him ???

we are not against betting, we are against channeling money to somebody’s accounts which use to oppress the rakyat.

According to UMNO leaders, Zaid Ibrahim is immoral because he drinks liquor, which is forbidden in Islam.

Why aren’t the same people protesting again gambling, which is also forbidden in Islam?

Does that mean liquor and gambling is OK for UMNO but not OK for members of the opposition parties?

dont forget that humpty dumpty once sat on the board of companies owned by Vincent Tan. Dont know whether he still does after all the criticism of him being a hypocrite.

Gambling ruins you, your family, friends, state and country.

Gambling in whatever form is bad and unproductive, the social cost of gaming activities be it legal or illegal is tremendous.

I support sports betting and my complaint is why not bring this earlier ???

The first person to condemn is Ibrahim Ali from Perkasa, a leader who claims to represent the Malay rights. …. Just wondering what Perkasa and their NGOs are going to answer or act on such haram act.

Dont understand why that particular youth group who loves to make police report , demonstrate and protest over a small issue remain mute .

The Tan Sri help me,I help him.
No Problem………Boleh selalu. 1Malaysia, must help one another.

But the problem is you will be helping him much more than he helps you. All information on payouts ratios (actual and whether the licence specifies any) is Officially Secret.

I see a lot of Muslims protesting here. Why don’t they protest against Muslim punters frequenting 4D shops in Malaysia also?

This is because, there is a constant flow of Muslims buying 4 digit games in nearly every outlet despite the big signage that says “Judi adalah Salah dari sisi Islam”.

How come JAIS not doing anything about this?

No one is being forced to bet, these protester should have protested against corruption and abuses of funds among government agencies. Betting outlets already aplenty with many of the punters are non Chinese or non Indians if you get what I mean. So what is the big deal, even school children will bet among themselves comes world cup period. I am actually glad to have it legalized. Sports betting is a much lesser evil compared to fags and alcohol. If we want to ban sports betting , we might as well ban alcohols and cigarates which is also an impossible… Read more »

Gambling a greater evil compared to fags and liquor? It shows your exposure or serious lack of it!

I think prostitution should be legalized as well, gambling, prostitution are lesser crimes compared to fags and alcohol?

The proposal to legalise prostitution is your stand or your party stand ???

So strange my friend ??? Are you honestly believe that legalise prostitution is for your own good ???

“KOKH IN” would be a great trade name for a … oh never mind. What’s the issue – is gambling forbidden in Islam? Legalising the apparent street trade in gambling is probably the best way of tackling it. The ‘illicitness’ of stuff like gambling is often part of the attraction, I think. Having scenes set inside gambling shops in TV shows in the 70s in the UK probably helped its decline there – all those smelly, unattractive old guys kippering each other with cigarette smoke, scratching on paper with little pens and watching TV monitors. Where’s the attraction? I expect… Read more »