This is the scene at Padang Merbok, where some 50,000 are attending a rally in support of Hadi’s bill.

Mind you, this is without any obstacles, roadblocks or threats of arrest. (And so can have a fair idea of how many people Pas could contribute to a Bersih rally.) This is more or less the number of supporters Pas could pack into a stadium in say, Kelantan and Terengganu.

Indeed, the numbers appear well short of Hadi’s prediction of a 200,000 turnout – and it is hardly a ringing nationwide endorsement of his bill. My good friend, Tasik Gelugor Pas information chief Abdul Rahman Kasim, was more guarded, forecasting 100,000 ahead of the rally. As friends, we have had frank exchanges – and strong differences of views – over whether Hadi’s bill is suitable for a diverse, multireligious society like ours. But no hard feelings.

Meanwhile, some 200 gathered for the Bebas counter rally at Taman Jaya. Among those addressing the crowd was Haris Ibrahim. 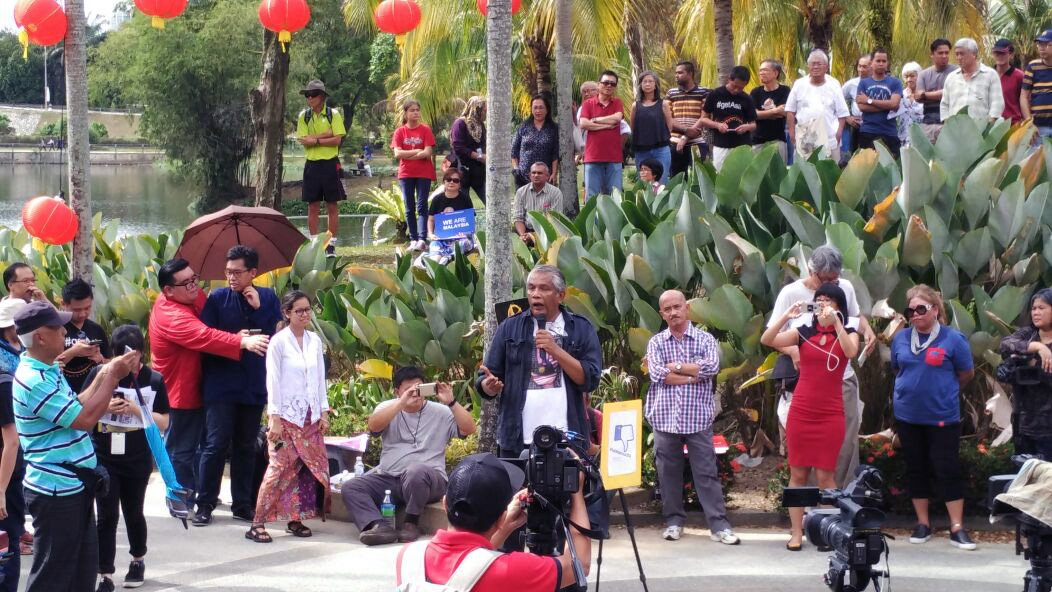 Anyway, it is good that the authorities have respected the right of both sides to gather peacefully and air their views at different venues.

The issue is made more complicated but the fact that this is more political than religious. Putting aside PAS’ ambition to see this through, the bill is an obvious affirmation of the party’s own religious credentials. In the current climate, this helps to regain the trust of its core supporters, which also explains why UMNO has jumped on the bill’s bandwagon. It helps UMNO to bolster its image at a time when the administration has suffered a dip in popularity. The timing of this issue is also convenient, as elections are due to be held latest by next year. As… Read more »

‘Muslims don’t need this right now’ http://www.thestar.com.my/news/nation/2017/02/19/muslims-dont-need-this-right-now/ PERLIS Mufti Datuk Dr Asri Zainul Abidin spoke bluntly at a recent forum on religion. “Gossiping is a big sin in Islam but are there (syariah) laws against gossiping? Do you see the religious authorities sending officers out to haul up those who gossip?’’ He points out that while some things are haram (forbidden) and sinful in Islam, that does not mean that Allah demands for all of these to be punished in a court of law. In the case of adultery, for example, he says, if there are only three witnesses of… Read more »

The former Grand Mufti of Egypt, Sheikh Ali Gomaa, had to argue why Egypt, home to the prestigious Al-Azhar University, had not implemented the hudud punishments in the last thousand years. To him, this contemporary era was one of shubhat, which effectively rendered hudud stipulations inoperable. Many do not realise that even the very concept of thieving in the Qur’an (referenced through the use of the term Sariq) raises doubt on what constitute an offence to invite such punishment, be it the frequency of the act of theft or the amount stolen. It is for this reason that the different… Read more »

Mark,
Just for Political gains Political Traders will sell their saliva.PAS under HADI can’t be tamed.He just think about his mission to spread [alleged] lies.

PAS made u turn after the death of Nik Aziz.

They failed their own target, called it a success and want everyone else to shut up. And the left believe there is hope of real change. The delusion is on both sides

Failures in religious crusades does NOTHING to stop them. 50,000 vs 200 is not even an adult conversation.

32% of Malays in Selangor think Hadi Awang should lead the opposition WHEN HE IS NOT. That is 32% too many supporters in what is a developed state. For PH to retain Selangor, Amanah has to win, not just DAP and wobbly PKR.

What is the purpose of this? Enhance the syariah law?

What is the punishment for corruption? In PAS?

The sad thing is the followers are blind to the wrong doings of their leaders in the name of religion. Can’t they see this rally has got nothing to do with religion?

Hadi Awang is the most incompetent leader i have seen malaysian politics. He should have been removed the the moment Pas lost the Terenganu state government in the 2004 General election. In fact if he was the Private Sector a poor results getter like him would have been removed long time ago.

rajraman.No wonder he lost Trengganu,Kedah and soon most state seats the next election.Maybe Kelantan MOI eyeing quitely.Is Hadi know how to counts? I also wondering is he really a Ulama? Is Hadi spoken the truth?
DECIDE with your OWN BRAIN, since HADI can brainwash you as the DEITY and MO1.

For PAS, a working relationship with Bersatu would give it access to the latter’s election machinery in Johor and Kedah, two states where Bersatu is strong and PAS weak despite its numerous attempts at making inroads. PAS could conceivably also use Bersatu as a mediator in order to keep Amanah from contesting in its traditional strongholds in Kelantan and Terengganu. For Bersatu, the objectives are equally utilitarian – keep PAS away from UMNO while strengthening the opposition by bringing PAS back into its stable. To succeed, and given the trust deficit that exists between them, Bersatu would have to assume… Read more »