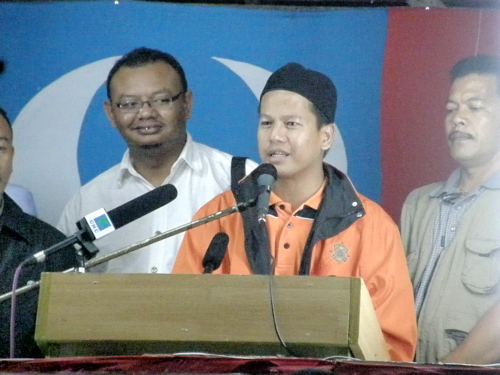 Ustaz Ramlang Porigi getting a load off his chest: “I was ordered to witness Saiful’s oath… This sort of oath should have been undertaken in the presence of both parties.”

0010: Anwar makes a reference to Nalla’s former driver’s sworn statement re: Najib. Even the Hindus are now getting into the sumpah act, he observes. How come none of the Chinese are swearing, he jokes…

He highlights a house in Permatang Pauh which has 100 voters.

2350: Anwar arrives to chants of “Reformasi! Takbir! Allahu Akhbar!” He says journalists from around the world are here to cover the by-election. He condemns the racial tactics used in the campaign. He says he is accused of being an agent of everyone – Jews, Americans, Chinese… He asks the Malays to reject corrupt BN leaders and not blame other races such as the Chinese or others. The helicopter is back! Anwar mocks the 15-sen oil price reduction. He recalls his ordeal in the past while the crowd listens in rapt attention. Now he mocks the BN leaders’ sumpah antics.

2330: I meet a Penanti-based blogger and he predicts a majority of 10,000-15,000. A ceramah speaker goes one better, predicting a 20,000-majority. He says they are better prepared to detect phantom voters if they turn up. “We will make sure the election is clean.” The same speaker says they are warning Khairy to  retract his statement that the PKR campaign is funded by America or else they will sue him. He adds that they caught people – allegedly Kepala Batas Umno supporters – putting up misleading banners. “Campaign properly and talk about the real issues, don’t resort to such underhand tactics,” he urges.

2315: Ustaz Ramlang Porigi is now speaking. He is an imam at the Masjid Wilayah Persekutuan, one of those who witnessed Saiful’s oath. He wants to get something off his chest and goes on to explain what really happened on the day when Saiful swore he was sodomised.

Ramlang says he was ordered (diarahkan) to become a witness to Saiful’s swearing but he does not say who ordered him. Anyway, he didn’t arrange Saiful’s oath-taking. The text of Saiful’s oath was probably advised by his lawyers or others. Ramlang considers Saiful’s oath as undertaken for his own benefit.

The imam says that, from what he has studied, this particular form of oath – sumpah mubahalah – has to be undertaken in the presence of both parties involved. It is only meant as a last resort where there is no evidence available for adjudication in court. But in this case, the matter was still in court, so the oath cannot not be considered to be sumpah mubahalah. It was just an oath for Saiful’s own benefit.

He adds that on that day, Saiful did not appear to be perturbed or afraid as a Muslim would normally be when undertaking such a solemn oath with all its possible serious consequences. Perhaps because Saiful was reading from a prepared text, he may not have been perturbed. But he made errors in reciting the oath.

Ramlang hopes that after this revelation he won’t be blamed (for this whole swearing business).

This imam is just a small-time imam not an Imam Besar, adds Pas commissioner Ibrahim.

2310: An eyewitness at Jimat market reports, “Anwar has been playing the right issues. Najib continues to attack Anwar but the latter is talking about unity and progress. The crowd is swelling on this cool night. Change is here… Anwar urges voters to vote early. Asking supporters not to be overconfident. Must pray more and focus on real issues. BN has lost touch with the masses.”

2307: The imam of Masjid Wilayah Persekutuan is on his way here. Above a helicopter with its searchlight  hovers across the night sky. Ibrahim, the Pas commmissioner for Pahang, is now addressing the crowd.

2300: Meanwhile, Anwar is at the Jimat market, where a crowd of 500 is gathered. All races are represented. He says PR represents the right government and blames BN for lack of direction. He urges the Malays there to vote against the BN.

2253: Penanti is so different from much of Penang. Where we are is quite rural, the people living in kampongs nearby.

2250: Mahfuz is addressing the crowd, recalling how he contested against Anwar in 1990. He is now addressing the UiTM quota issue. He says there are already 10 per cent foreigners in UiTM so why is it an issue to open it up to non-bumis? He alleges that Abdullah Badawi’s Raya open house in PWTC costs RM3.5 million in 2003. After that, it was RM4.9 million per year. Cost borne by the PM’s Dept, he alleges.

At Jimat market in Penanti, the crowd swells to 500.

I am now in Ladang Ibu, Penanti not far from Bukit Mertajam. Crowd of about 4,000 here. Nik Aziz is arriving along with Mahfuz. Azmin is singing the praises of Guan Eng, whom he describes as a clean leader.

The day of reckoning for the BN-UMNO regime is surely approaching around the corner.

The regime selve-life is over.