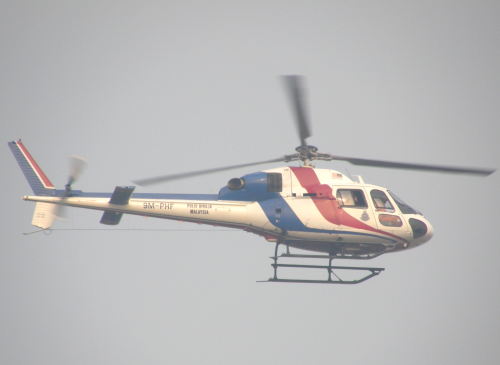 This police chopper was one of a pair that circled continuously above the large crowd on Nomination Day (Photo credit: Abang Benet)

BUKIT JELUTONG, Permatang Pasir – A helicopter, believed to be a police chopper, beamed its searchlight over a crowd of about 30,000 listening to Anwar at a Pakatan ceramah just before he brought the curtain down at midnight yesterday.

“It’s okay, let them disturb us for a bit. I will complete my speech,” said Anwar earlier, as the helicopter clattered overhead. “It’s not always we get a helicopter in Permatang Pauh!”

Permatang Pasir, a state seat held by Pas, lies in the Malay heartland of Permatang Pauh. Thousands had gathered in a large open area in Bukit Jelutong, which was also filled by the huge travelling bazaar that follows Anwar’s ceramah everywhere. I saw stalls selling everything from nasi biriani, fried jackfruit and what looked like aphrodisiacs!

The presence of police helicopters over the last couple of days gives an indication of the size of the crowds during Nomination Day in Penanti on Saturday and the big ceramah here last night.

A huge Pas logo was featured on the backdrop of the stage circled by the colours of PKR. A few ustaz were seated on stage and as I waded my way through the crowded field – I had to park a mile away – I heard a young ustaz address the crowd. He related the tale of a king or royalty who had been wronged and had to undergo much suffering and hardship to prepare him for a leadership role. This figure the ustaz compared with Anwar:

“It is this suffering that Anwar is going through under very cruel circumstances. It is a test for Anwar and only after he has gone through such cruelty (kezaliman) would he be better qualified to lead the country. This trial, this cruelty is actually allowed (directed?) by God. Compare this to the present BN leaders who have never been victims of similar cruelty; no wonder they can inflict such cruelty on others.”

I’m used to these helicopters doing their show performances. Pity they are not painted black, because, then I’d take notice!! The trouble is the clattering overhead has been heard over our innocent codo resients so often…..the people disregard them and keep watching television. It is part of Kuala Lumpur’s environmental pollution, we are used to dirty streets, dirty tricks, dirty drains, dirty toilets, filthy smells….so what is the big deal, now we just look up from our balconies and say…”It’s one of those dirty helicopters. At night, at black night when babies are asleep, the stray dogs bark and tell… Read more »

The presence of heavy police; the presence of Ministers
and the helicopters hovering – all this shows that the bn
is terriby worried and scared –

In spite of all this, Saudara Anwar will win the Permatang Pau seat

Those who can, teach
Those who can’t, preach
Otherwise, at least try to reach
Now from above use light for lost souls to search

just go all out and vote DSAI your MP and our next PM of all Malaysian.

long live DSAI and may god bless you and your family.

DSAI has been truly humbled and humiliated like no other leader, maybe save Lim Guan Eng.

“It is this suffering that Anwar is going through under very cruel circumstances. It is a test for Anwar and only after he has gone through such cruelty (kezaliman) would he be better qualified to lead the country. This trial, this cruelty is actually allowed (directed?) by God. Compare this to the present BN leaders who have never been victims of similar cruelty; no wonder they can inflict such cruelty on others.”

Should have use the chopper to look for kj mat rempit.