Is this Umno’s knockout punch for Pakatan Rakyat? But then Pakatan Rakyat is already lying sprawled on the canvas, after it “ceased to exist” yesterday. So is this a blow after the bell has rung and the towel thrown in?

The private member’s bill towards hudud laws is listed as the last item in the Order Paper, according to an MP in a text message from Parliament at 11.20am. He feels it is unlikely to be debated though.

“Theoretically, the government could vacate the rest of the Bills ahead of Hadi’s and move his up. But very unlikely.”

So is this just a wayang?

Meanwhile, what do you think of Nazir Razak’s reported plan for a new party? (Nazir has since clarified he is setting up an NGO to advocate moderation.)

While some may welcome a more moderate approach to politics, we should be wary of the top 1 per cent and those pursuing the corporate agenda stepping forward to ‘hijack’ the movement for real change during the current realignment of politcal forces.

PKR for its part held its political bureau meeting last night but did not reveal the outcome to waiting journalists. It is possible that the party will make an announcement later today, after consultation with party leaders.

We are also watching to see what the Pas ‘progressives’ have got up their sleeve. The 18 ousted Pas leaders are mulling over a new platform, either by setting up a new party – perhaps an Islamic democrats party? – or an NGO, aligned with PKR and DAP.

Pakatan may be flat on the canvas, a white towel covering it, but the way things are shaping up, we could well see a new coalition emerging: Pakatan v2.0.

Many are also watching Razaleigh’s next move as some have speculated that he could turn out to be an interim leader in whatever realignment that takes place.

Some analysts are seeing the current realignment of political forces as the drawing of a line in the sand between  liberal, ‘moderate’ Malaysians on the one side and conservative, nationalistic right wing forces in Malaysian society on the other.

Let there be no doubt where we stand: for a progressive, democratic Malaysia that upholds international human rights standards and empowers ordinary people.

In the midst of all this realignment, concerned people must insist to the political parties that people-centred policies should be their priority:

That will do nicely for starters. Under no circumstances should the people’s movement for change be hijacked by anyone or any party,  existing or new. 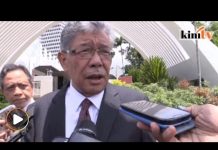 Malaysian sharia laws: Parliament to debate hudud bill that could introduce stonings and amputations in state of Kelantan The Malaysian Parliament is set to debate a controversial bill that could see stricter forms of sharia law introduced in the state of Kelantan, but critics have warned the so called hudud bill would result in whippings and even the amputations of limbs for crimes such as theft. The Pan-Malaysian Islamic Party – commonly known as PAS – is pushing to introduce the proposed laws in the conservative north-eastern state, but first the bill must be passed by the Malaysian national parliament.… Read more »

U.S. FINALLY WAKES UP – MALAYSIA NOT MODERATE AT ALL: ALMOST ZERO SUPPORT FOR NON-MUSLIM RELIGIONS Non-Muslims and those with interpretations of Islam that differ with the state face difficulties practising their faiths in Malaysia, the United States State Department’s International Religious Freedom Report 2015 says. Non-Sunni Islamic schools of thought are considered deviant, with followers open to state action, the US department reports. It also states that while there is heavy state financial support for Sunni Islam, the same cannot be said for other religions. “Some government bodies, including the federal government’s Department of National Unity and Integration, were… Read more »

Life in Malaysia’s Kelantan amid a push for Islamic law
http://www.channelnewsasia.com/news/asiapacific/life-in-malaysia-s/2858872.html

Malaysia is moving towards a total imposition of Islamic Sharia. Malaysia’s government has pledged its support for an Islamic penal code that seeks to impose Sharia-prescribed punishments such as amputations, public stoning and flogging on its multi-religious population. The new legislation referred to as “Hudud Law” also seeks to segregate women from public life in Kelantan province, a predominantly Muslim northern state. The proposed constitutional amendment will allow other Malaysian provinces to align their legal system to stricter Islamic law as well. With a population of around 30 million, only 61 percent of the people identify as Muslim. Apart from… Read more »

Moderate leaders of G25 must now come forward to form a secular Islamic party, else the country is heading towards talibanisation.

Now Malaysia is infested with Disintergration Syndrome ?
I dread to think of if Malaysia as a nation is also facing that !

MCA can now be hero to fight the hudud bill in front of Umno.

MIC is now confused on who is their president.

Commentators yang super all now must explain why the rich businessmen now swapping for A$, S$ and even Hong Kong money causing no confidence in ringgit to slide further.
jangan asyik CAT nanti semua susah duit

Never mind for them as they can live on GST-free home cooked Nasi Goreng, served straight from Kuali with cucumber as side dish, Ahmad Maslan style.

I think most Pas progressive will not leave Pas with the exception of Sabu or Huzam. Like I said before, the CAT and senior are now in panic mode. Remember how the Cat senior wanted to entice M to save Malaysia. M spurned him so he is now going for Razaleigh. Anyone once regarded as syaitan will now do lah, no problem and will be regarded as God sent. Holy cow anything chau sui (sour or smelly) also no problem. What has become of the CAT and senior.

If Razaleigh come in he will get the second blow. Najib will give him a.good knockout