This is a piece from the Malaysian Insider today. 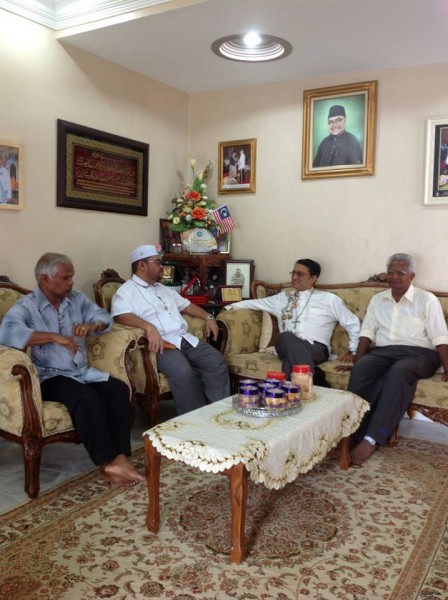 As the politician from PAS settles on a plush red cushion chair in one of the many common areas of Parliament, he shrugs off his cream-coloured coat, which he had paired with matching pants and a red-and-white striped tie.

“It was so cold in there,” lets on Mujahid Yusof Rawa, referring to the main Parliament hall, where proceedings take place. “And now, here, it is hot.”

Just five minutes ago, this two-term Member of Parliament was on the television outside the hall, where he had debated a subsidy bill.

He is rarely outspoken in Parliament but this 49-year-old recently hit the headlines after several Muslim groups protested his efforts to foster a interfaith relationship with the Christians.

Even a police report was lodged against Mujahid before a dialogue session in St. Mark’s church in Penang just last month.

“Well, that worked in my favour,” he laughs. “We received a lot of publicity and more people are beginning to open up to this idea,” he says, referring to his interfaith efforts.

Mujahid chuckles and nods his head when it is put to him that people find it incredible that PAS, which has a reputation for being extreme on several issues, had taken the first step to hold dialogues in churches.

“Yes, that’s right. They were surprised that a PAS guy was saying and doing these things. They were even more shocked when I told them that I was not alone in this, that my whole party is behind me.”

He was seized by the idea of “mending the fractured relationship” between Christians and Muslims after several churches around the country were attacked and vandalised in early 2010.

Aware that Christians were in fear of being victimised, he approached his party leaders with the idea of interfaith dialogue.

Also in solidarity with Mujahid is PAS deputy president Mohammad Sabu, or popularly known as Mat Sabu, who says he is proud of his comrade’s efforts.

“He is on the right track. He’s made a difference, especially among the Christians in Penang. Islam encourages dialogue with the non-Muslims and I am 100% behind Mujahid on this,” says Mat Sabu.

Mujahid has since held talks in at least 30 churches around the country.

“My father, the late Yusof Rawa, was a defining force in my life and I believe he would have done the same as well,” Mujahid says, his voice breaking. His father was a former president of PAS.

“He was big on interfaith relationships and was extremely fond of all my non-Muslim friends when I was a young boy in Penang.”

As the youngest of 11 children, Mujahid was especially close to his mother and was one of two siblings who followed his parents to Iran, Turkey and Afghanistan while his father was posted as the Malaysian ambassador there.

“I did my primary education in the international schools in those countries. My third sister had come with us to help my mother at official events.”

With pride in his voice, he confesses that he had never attended any religious schools, and instead relied on his parents to educate him on Islam.

“Even as an ambassador, my father would come home in the evenings, sit with me and make me recite verses from the Quran,” he reminisces.

Mujahid came back to Malaysia when he was 14 and continued his secondary education at the Penang Free School, right up to Form 6.

“I had a dream of becoming a lawyer. But I didn’t do so well in the STPM exams so that was it.”

His life changed after a friend of his father, who was already the PAS president by then, came to visit from Kelantan.

“This friend, Ustaz Yahaya Osman, asked my dad who was going to take over from him. He asked my father if I would be interested in learning Arabic from him.

“I did not know anything about the language but I thought I could go and have a nice holiday in Kelantan on the pretext of learning Arabic. My father was so happy but he did not know I had an ulterior motive,” he smiles.

In Kelantan, however, Mujahid was surprised to find himself becoming more and more immersed in Arabic.

Later he enrolled at the American University Cairo in Egypt to study Arabic for non-native speakers and two-and-a-half years later, he went on to the Al-Azhar University and took up Islamic studies.

“My father was keen for me to go to Al-Azhar and he was proud that I had already started writing letters back to him in Arabic.”

In his final year, a Malaysian friend introduced Mujahid to his future wife – Zuraida Husin – who was also a student from Al-Azhar.

“I had no desire to get married at that time. Had no time to flirt around,” he jokes.

The friend continued to urge the then 26-year-old Mujahid until he agreed to meet her.

“My friend arranged for me to see her at a shop where I pretended to buy a bottle of Coca-Cola while I observed her. I didn’t want her to know I was looking!”

Mujahid then told his friend that he was smitten with Zuraida and gave his “best picture” for her to see.

“The hurdle after that was to convince my father. I was expecting a negative response because he always said ‘studies first’.

“But he was curious and told me he would check out her family in Terengganu first. He sent his men and they sent back a good report and then we were married,” he said with a flourish.

The couple went back to Egypt after the wedding and had their first child there, a son. Another two girls followed and now Zuraida is a religious teacher at a school in Nibong Tebal, Penang.

Mujahid was a religious teacher upon returning from Egypt in 1991. Up until 1999, he was teaching, and then lecturing, at various institutions until he decided to follow in his father’s footsteps.

He went on to become Bayan Baru PAS chairman in Penang and is now the PAS state deputy commissioner and the chairman of the PAS national unity bureau.

“I think that religious issues give a lot of impact on national unity,” Mujahid says.

“I do not think that the government was on the right track by dragging the poor nation into the abyss of hatred, intolerance and prejudice.”

The Christians, he notes, have been receptive of his message and he was delighted to find that it also altered their view of PAS as an ”extremist Islamic party”.

“In the midst of all this religious tension, Christians are now able to feel that there is some hope for them because of the dialogue sessions,” he adds.

“Mujahid is a person who believes in dialogue. Dialogue is about listening, communicating and relationships. All this can only come about if there is a basic spirituality to inspire and motivate.

“He comes across as one such person. The world and our nation needs more of such persons who can reach out to others beyond boundaries,” says Francis. – October 5, 2013.

What a breath of fresh air Mujahid is. How wonderful would this country be if we have thousands more like him.

On the other hand, His counterpart Johor PAS Information Chief Suhaizan Kayat who stood for Simpang Renggam parliament seat and Kempas state seat and lost both was exposed to have have said that Muslims are forbidden to wish Christians ‘merry Christmas”.

The question is who will believe such drama when we hear frequently suggested ban list from the headquarter ??? Only the views and directions from the HQ counts and not from some small potatoes from nowhere trying to pull a publicity stunt.

The idea of talibanism has been actively denied by most Malaysians and there is people still trying to paint a good picture for group supporting the harmful direction. Wakeup and smell the coffee !!!

This is exactly what the rest should be doing – instead of hurl blame each other and trying to be the master of all, let us look at our similarities – after all, there is ONLY ONE GOD and this ONE GOD desires us humans to leave in Peace and Harmony!

Ibrahim Ali of Perkasa told the Malaysian Insider: “The racial riots on May 13, 1969 occurred because Malays were not satisfied.”

So, Tanda Putera was wrong?

1Malaysia should incorporate such behaviour of inter-faith understanding.
It is a possibility, no need to look for an endless and abstract one.

Its clear these Malays have not forgotten what it means to be one. BUT the real issue is why is so many threatened by what he does? These kinds of thing would have normal in the Malays of yesteryears. That groups are acting against him shows the increase in intolerance and perversion of the Malay identity and disagreement of their future. The disagreement is a fundamental INDECISION now mostly but it CAN LEAD TO A VIRTUAL CATASTROPHE. The importance of what HE DOES is that he is hero against a potential castatrophe, a flickering light, maybe even a small flame,… Read more »

Just for the same reasons that the late Palestine leader Arafat in his life time would go to attend midnight mass and so did many other prominent muslim leaders. One can go anywhere of worship so long as you do not participate in the praying. Of course this only applies outside of Malaysia…

I have a dream that in a not too distant future there will be peace, harmony and unity in this country wiith the emergence of more Muslims like Mujahid Yusuf Rawa and the people respect one another
based not on race, colour and creed nor status, position and wealth, but the content of their character
and the sincerity that flows from within their heart. Will my dream come true?

Why not? Everyone should dream such dreams and who knows, what is possible could become reality.

syamsul a
Reply to  Anil Netto

Mujahid puts Ibrahim Katak to shame for instigating racial issues if $ not allocated to Umnoputras ???

see also another Malaysian Insiders story not sure PCA act will apply to this katak for violating peaceful harmonious living in multi-racial society …
http://www.themalaysianinsider.com/malaysia/article/perkasa-chief-warns-of-fresh-race-riot-if-malays-not-helped-economically