The saga of Hadi’s bill in Parliament descended into a farce this afternoon amidst shouts of “Takut! Takut!” from opposition MPs when Speaker Pandikar Amin refused to allow a debate.

But not everyone is upset with the speaker’s decision to abruptly defer the debate on the bill to the next parliamentary sitting.

The fact that the bill made it to the floor of Parliament – albeit for a one-sided airing – will allow Pas president Hadi Awang to go into the Pas party elections on 29 April-2 May 2017 in Alor Setar with something to show his party delegates – that his bill is moving.

READ MORE:  Siti Kasim's Maju gets off to a flying start 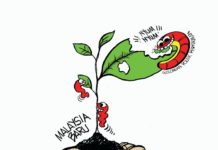 Catholic Bishop Emeritus Dr Paul Tan Chee Ing hailed the urging by Sultanah Raja Zarith Sofia of Johor for Muslims to show equal respect to non-Muslims as the most “radically inclusive statement ever to come from a major civic leader on the country’s most fraught subject – inter-religious relations.”

“It’s like life-giving water to a parched desert traveller,” opined the former head of the Catholic Church in the Malacca-Johor diocese.

Mohamed Tawfik Ismail, the son of former DPM Dr Ismail Abdul Rahman, in an affidavit he filed in court, has claimed that BN’s inconsistent stand on the tabling of the amendments to the Act 355 is “political posturing and a ploy” by Umno and PAS as the general election approaches.

Lawyer tells off Parliament security guards turned moral police http://www.freemalaysiatoday.com/category/nation/2017/04/07/lawyer-tells-off-parliament-security-guards-turned-moral-police/?utm_source=feedburner&utm_medium=email&utm_campaign=Feed%3A+FreeMalaysiaToday+%28FMT+News%29 PETALING JAYA: Security personnel at the Parliament entrance today let a woman through after being sharply rebuked for harassment when they tried to bar her from entering because her outfit was considered “indecent”. Women’s Aid Organisation assistant treasurer Meera Samanther was told her knee-length skirt, which she usually wears to attend court hearings, was too short when she tried to enter the premises. Meera, who spoke to The Star, was both stunned and incensed by the moral policing. “I lost my cool. So I raised my voice and told him… Read more »

Pandikar Amin was playing by the “script”, starting with the fact that the Dewan Rakyat meeting on Wednesday had gone on for 20 hours until 5.05am on Thursday, and 5 government bills were also withdrawn, to “clear the decks” for Hadi’s motion. Pandikar had told PKR’s Gopeng MP Lee Boon Chye that the government had asked the House to fast-track Hadi’s motion – proof that the Barisan Nasional (BN) government, representing 12 component parties, had made the call although Malaysians were told that BN would not adopt the shariah bill. But the strongest proof that yesterday’s proceedings had been a… Read more »

This is a double-edged sword (a contentious ceramah debate dividing the Rakyat) from BeeEnd for Opposition to handle in next GE: 1) the deferment of the debate on the Bill to amend the Syariah Courts (Criminal Jurisdiction) Act or RUU355 is to ‘advertise’ that BeeEnd Government would follow the spirit of consensus and not take over the Bill (so the timing of slotting it with surprise but without a debate in Parliament) 2) the furious opposition to the Bill by MPs is a free-live show of religious interference to some Malays & Muslims which can effect their emotional mistrust of… Read more »

Congratulations, Umno over Act 355 http://www.malaysiakini.com/columns/378316 Less than eight hours before the tabling of Act 355, the Parliament made a new record by ending its session at 5.05am after a 20-hour frenzy to pass multiple bills. Rushing bills without sufficient scrutiny is never a good democratic practice. Initially, some MPs were dumbfounded by the need to expedite the process. However, by noon they found out that the marathon was necessary to give way to YB Abdul Hadi Awang’s bill. In the process, not only were bills rushed through thus sacrificing accountability and scrutiny, some important bills were put on the… Read more »

BN playing game of deceit over Hadi’s bill, says Guan Eng http://www.freemalaysiatoday.com/category/nation/2017/04/07/bn-playing-game-of-deceit-over-hadis-bill-says-guan-eng/?utm_source=feedburner&utm_medium=email&utm_campaign=Feed%3A+FreeMalaysiaToday+%28FMT+News%29 GEORGE TOWN: The silence of BN component parties during the tabling of the private members’ bill on the shariah criminal code was a clear cut case of ‘cakap tak serupa bikin’ (not walking the talk), DAP secretary-general Lim Guan Eng said today. He said BN parties such as MCA, MIC, Gerakan and SUPP had outright rejected PAS’proposed amendments to the Shariah Courts (Criminal Jurisdiction) Act, or RUU355, outside Parliament, but when it was tabled, all of them were quiet. “Clearly BN and PAS are in a pact… the… Read more »

MIC Subra is aware of such strategy to table Act 355 by Hadi yesterday, but MCA WeeKS openly said to reporters he was not aware of. Another sorry state for the 7-11 club…
Subra at least learnt from Superstar not to hide.

It’s not brinkmanship, it’s complete collapse of very foundation of the founding of the country that underwrote its success since Merdeka. Syariah and Hudud WILL be the law of the land unless BN is out of office. It does not matter if the bill is killed eventually. It does not matter if Hadi’s PAS is wiped out electorally in the next GE. Najib has crossed the point of no return where UMNO must increasingly joined with Hadi’s PAS ideologically to stay in power. If PAS is wiped out, UMNO will just be more like them. This means they eventually must… Read more »