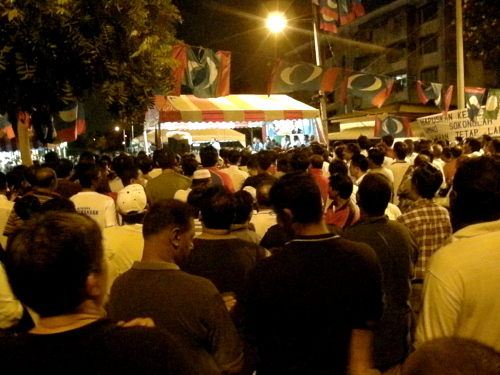 They came from far and near to Permatang Pauh last night

This was the scene at the Pakatan ceramah in Seberang Jaya last night, attended by close to 3,000 people.

They shouted “Reformasi!” and “Makkal Sakthi” enthusiastically. For some, it was their first experience at a political rally. “I never knew it could be so interesting,” said a politically awakened middle-class  resident of Butterworth.

Much of the discussion among the crowd centred on whether Anwar could improve on his wife Azizah’s winning majority of over 13,000.

One Permatang Pauh voter told me that he had heard from a reliable source that support for Anwar was currently running at 70:30 and that the Pakatan leader could improve on Azizah’s winning majority by a few thousand. “Even if it’s a dirty election, he could win by a 10,000-vote majority,” he insisted.

Anwar himself has called for caution, warning that more dirty tricks could surface between now and polling day. “Don’t be surprised at what else they could bring up.” He highlighted cases of certain people going around photostating the ICs of voters.

But Guan Eng’s declaration of a state holiday on Tuesday – thus allowing more voters to cast their ballots – should improve Anwar’s chances somewhat.

One political analyst warned that Umno could continue to play the racial game, feeding into Malay insecurities of being governed by a DAP-led state government. Penang is the only state in the peninsula where the Malays are in the minority; so the insecurity among segments of the Malay community in Penang may not be found elsewhere in places such as Kedah or Kelantan. It is this sort of insecurity that is being fed by unscrupulous campaigners with their racially and communally charged posters, banners and leaflets.

In the Pakatan’s favour, however, is the fact that low-income workers of all ethnic groups – especially the Malays who form a large proportion of the working class – are finding it tough to make ends meet. There are significant pockets of Malay and Indian poverty in Permatang Pauh and surrounding areas. The 15-sen reduction in oil prices is widely seen as too little too late. “Are you that cheap to be bought by 15 sen?” is the recurrent question that is being raised by Pakatan ceramah speakers.

The BN candidate Ariff also carries the baggage of his brother Amin, who has been implicated in the multi-billion ringgit naval vessels scandal. Amin is believed to be now residing overseas.

The component parties of the BN such as the MCA, the MIC and Gerakan are in disarray – and this is not likely to help the BN cause.

In contrast, the level of interaction and campaigning among Pakatan parties has been encouraging. About a thousand volunteers from PKR, Pas and DAP – in about equal numbers – converged on BN candidate Ariff’s Seberang Jaya stronghold for house-to-house campaigning from 8.00am to 11.00am today. “The response was encouraging but whether that will be translated to votes remains to be seen,” said one political activist who participated. A similar blitz is scheduled for 9.00pm today.

The big question is what kind of impact the “Saiful-swearing-on-the-Qur’an” episode has had on the electorate. Will they react with disgust or will they be swayed by the likes of Ezam, Khairy and Nalla? Many have indicated that they are fed up with or put off by the sumpah-menyumpah antics.

Meanwhile, the mainstream media have gone overboard with their BN propaganda. Look no farther than today’s edition of Utusan.

For Anwar, the main issues are national unity and the economy. He vowed to lift the economy from the doldrums within three months of taking over power at the federal level if given the chance.

On the ground, the inter-mingling of the various ethnic groups in the Pakatan campaign and among the ceramah crowds has provided hope to many that a new, more just, Malaysia – where everyone has a stake under the sun – is possible. It is a delight to see the level of interaction that is increasingly evident. Why, they even shout in protest in unison at the ever-circling police helicopters above! This is the united Malaysia that many have longed for.

“We have a dream,” said Anwar. “But it’s not an empty, wishful dream (mimpi khayalan). We want to actualise it and work towards it.”

Again in Permatang Pauh, sitting in a coffee-shop, observing the enthusiasm shown by DSAI’s supporters. Chinese, Malays and Indians are showing a positive team spirit in calling for all people to vote for Anwar. They look so cheerful. Most BN stalls wre empty. BN supporters have deserted them.

Jeyakumar’s ceramah drew a crowd of more than 3,000. Among them were BN supporters who are disenchanted with Umno. Looks like many BN supporters are not doing Pak Lah any favours here. An Umno man quipped, ‘Giving Anwar a landslide victory will put pressure on Pak Lah to quit. This is what the majority of Umno people desire. if the winning margin is small, it’s a moral victory for Pak Lah. We don’t want this to happen. We’ll support Anwar in this by-election and make sure that he wins with a big majority.”

The Indians are fuming because of the (cases of) racial harassment going on in schools. They want to teach Hisham and the BN a lesson by again voting for Anwar.

The Chinese want a better opposition in Parliament. The economy is down, they say.  Anwar is (seen as) the saviour as he is internationally known. Ariff is not the one who could do it in parliament. He is not charismatic at all. It has to be anwar. A middle-aged man said, ‘You see, out of fear for Anwar they have reduced the fuel price by 15 sen. When anwar goes to parliament they will reduce the price more. So let’s give our votes to anwar.’

The thrill of watching and listening to them goes on… I could also see some foreign reporters talking to the people here.

He goes on to add:

Pas supporters are doing a fantastic job here. They are championing victory for Anwar and openly declaring, “DSAI is our next PM of Malaysia.” Interesting to see Indians and Chinese mingling with Pas groups and together shouting, “DSAI for PM!”. A scene of muhibbah indeed. A senior Pas leader surmised, “This victory is going to see Anwar become the next PM.” He spoke with confidence and gave some good reasons why he believed so. Looks as if PAS and DAP are all out for Anwar to be the next PM.

Umno’s strategy backfired heavily. In the first place, Saiful’s drama should not have been used in the campaign. Most Malays did not like this, as they feel the Malays and the religion of Islam have been badly tarnished by this move. An elderly man said, ‘Memalukan orang melayu dan ugama kita. Taada modal lain ke?’

But blog reader “Zorro” (not the blogger Zorro) warns:

No… most of Anwar speech followers were people from outside Permatang Pauh…. I think 70 per cent of them…. Don’t be too confident…. Permatang Pauh people are more to Pas’ sentiment…. And most will not be going out to vote on 26 Aug 08…. Wait n see…. They don’t trust both Umno and PKR (because of DAP’s attitude).

Well, we’ll see next two days when the results are out…. Anwar will win but with a simple majority.

hi i wish that all people there must vote for Anwar, cant we relize that BN is playing through their power, now the situation n circumstansiou as same as Taiwan, i hope those understand chinese just watch then apply to malaysia, we want to change, the UITM had marched around 5000 student but none of them being errested but at Hindera being areest few of them cant we see that the police are not doing their job jus helping their head to escape the guilt if Anwar win (many) of them surely would be charge to court, that is why… Read more »

Your actions are uniting Malaysians of goodwill of all races
on the PKR side — Malays, Chinese, Indians, etc

Anwar can win with a majority of 1 vote for all I care – I just want him to win. We need change in this country that we love so much. And we need it now. And Anwar and his team seem prepared to try to deliver this change. Whether or not he is going to be a good PM, and whether or not things really change in Malaysia going forward is up to the pressure that we, the people, put on the PM and his new government. They seem more willing to listen and to make practical changes than… Read more »

Flip Flop BN is running out of ideas except to use every dirty tricks available like using fake PKR supporters/imposters to…. tarnish PKR’s image and spinning lies in the MSM they controlled & finally to (influence) old ladies with welfare money, all elderly Voters take the money, you deserve them, but vote in a new Government come September 16, 2008 for a New Prosperous Malaysia to benefit all the Rakyats not the cronies of BN and Umnoputras only. Petrol price cut at the last minutes of Permatang Puah By-Election is now the very sign of Desperation of the Flip Flop… Read more »

just go all out and vote DSAI for he will not only be our MP but also our next PM for all Malaysian.

long live DSAI and may ALLAH
bless you and your family.

God Willing DSAI will win with a 30,000 vote majority

Many thanks for the excellent info and reporting of ground zero!

If Anwar gets 20k majority over Wan Azizah’s 13k, he might have to do the dishes for 3 days! 😀

Who said PAS don’t trust Anwar? Hogwash. They have no saviour apart from him. It was him who raised the issuses that were fought over during the elections and it was his suffering that brought Malays and non-Malays (this time) into PAS hands.

cant wait and may the FORCE be with PR.

oh, about this arif. he may speak hokkein and chinese. wasnt he one of the leaders of the illegal rally against a legitmately elected state govt of Penang on the basis of race. such hypocrites, be very very beware.

We will be there..rain or shine (well lets see)

Just received word from Haris that there will be a BIG announcement tonight at Padang Ibu, Penanti ceramah at 11.00pm that will rock BN in it’s trousers. Please post this on your front page and inform as many supporters as possible to make their way to the ceramah tonight.

BN’s campaign is getting really dirty. Personal attacks is one thing, but they are also playing with racial and religious sentiments. Malaysiakini reports BN is using fake banners and leaflets. There’s one banner with Lim Guan Eng’s face on it and the words “PENANG GUA PUNYA.” There’s also a leaflet showing Anwar, Wan Azizah and Hadi with Anwar holding a Koran and praying surrounded by DAP leaders whose faces look pasted in. The words are “Anwar kata sumpah Saiful tidak Islam. Adakah ini secara Islan? What kind of people will rouse racial and religious sentiments to win votes? What kind… Read more »

Bad news folks, Najib just gave a press statement that the move to declare Aug 26 a holiday is unprecedented and will see if Fed gov’t can over-rule the declaration.

This is a last blow for BN and we will see the detruction of UMNO !!