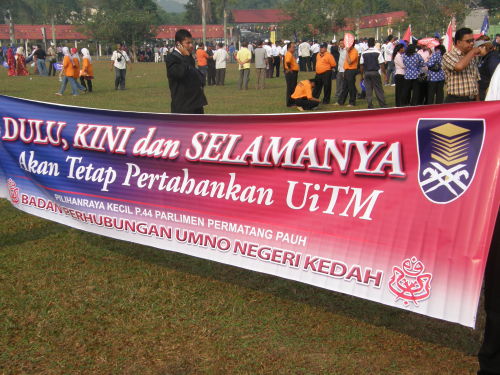 At around 9.45 last night, Anwar bravely addressed a crowd of close to a thousand people on a service road outside the UiTM Permatang Pauh campus. Nearby apartment dwellers and students from the hostel, mainly Malay, poured out to listen to him. Some of these students must have been among the reported crowd of  5,000 who had demonstrated here against Selangor MB Khalid Ibrahim’s suggestion that the university open its doors to non-bumiputeras (see below).

Anwar stressed to the crowd the importance of multiracialism. He would be a prime minister that would be fair to all Malaysians and it would be his responsibility to make sure he took care of all ethnic groups.

Applause broke out from the largely Malay crowd which included the Malay UiTM students.

“All it takes is for the right leader to tell them the right thing and they will support it,” marvelled a newspaper editor who witnessed the scene.

This excerpt from a Bernama news report:

BUKIT MERTAJAM, Aug 15 (Bernama) — About 5,000 students from the Permatang Pauh campus of Universiti Teknologi Mara (UiTM) held a peaceful protest against the suggestion by Selangor Mentri Besar Tan Sri Abdul Khalid Ibrahim that the university open its doors to non-bumiputeras.

The students wore black and gathered at the campus’s field from 9am for an hour and sang the varsity’s official anthem and patriotic songs.

They dispersed after the head of the students’ representative council, Mohd Faizal Zainol, handed over a memorandum to the deputy director of the academic division, Dr Mohd Abdullah Hemdi.

“If Abdul Khalid does not retract his statement all UiTM students will have a huge gathering in Shah Alam. We hope the issue of a non-bumiputera quota is not discussed again. We regret that Abdul Khalid has not upheld his race’s rights,” Mohd Faizol said

Malaysian political leaders BN/UMNO have been playing a racist tune all the while. Its that they have been going further and further until to a point of no return.The press has been restricted from giving the true picture of the situation. Unfortunately due to the cyber information the younger generations has access to the truth of the situations.Why are we still keeping these bunch of “leaders”? Is 51 years not long enough for us to wake up? DSAI has come up with an entirely new version ie. Bangsa Malaysia. We just have to try out 1 term.Why cant we take… Read more »

Amid the chatter, we often miss the point that our graduates need to be competitive against those in other countries. Many graduates in India are truly world-class. Hence the backroom operations and IT/research/design work going their way. Similarly, China,Korea & Japan have produced not only their on high quality graduates but have many trained in the West esp the US. I have worked for an MNC all my professional life. I will personally attest from my personal experience that the performance level of graduates with whom I worked in Indonesia,Thailand and Philippines are often pretty high esp the Philippines. If… Read more »

All I know is Anwar wants a Moslem state.. why Kit Siang say he is a change man? I ask my neighbor (Malay).. he said Anwar will be a Moslem PM.. so why Kit Siang cannot see?

UiTM have been producing graduate for such a long time that we forget that UiTM student also had to student very hard to get their Dips, Degree, Masters and PhD. UiTM dont just print the diplomas and give it out for free, student had to EARN it. Just like students in the Monash U in Sunway, or Taylors in Subang. If there was any question about quality why is it not asked before this. When Anwar Ibrahim was the Education Minister (there was no higher education ministry at that time)? Why did he not in his capacity as education minister… Read more »

It is just evil when the MSM did not report that Uitm does reserve 5% for foreign students and give impression that it is 100% Malay/ bumi. It is also ironic that the propoganda here is “Ketuanan Melayu” but when they try to get Uitm Sarawak students to protest, they changed it to bumiputra rights. So, which is which? Anyway, i feel that if these ******* want 100% Malay, just go ahead. We actually don’t care because we are looking at other better universities. And, I have interviewed Uitm students who can’t speak proper english. There are good ones too,… Read more »

malaysian niah,
care to elaborate more on the tax side because i did not find any statement or Act under the law concerning that 90% tax comes from non-malays and 10% comes from malays.All that i could found was there’s tax based on the status of citizenship in Malaysia either resident or not which stated under Income Tax Act 1967.

what your said about the UITM grads aren’t entirely correct.there’s still lotsa grads that succeeded in getting employed by big and private sectors.do check some big companies and ask them if there are any employee of UITM grads.

mr mugam irregardless … this is the time to bring it up. perhaps you belong to the 70s or 80s generation when malays are eating in your rights, you respond by handing them the platter. sorry, i am a 90s child and i look forward to my kid having equal standings in a fair and competitive world. i want my kid to say i am a Malaysian proudly, not like me. I can only say I am Indian and I won’t even bother to identify myself as a Malaysian. I want my kid to grow up in a country govern… Read more »

How many of these students from Uitm, Mara, Upm, etc are unemployed?
U tell me…!

Is this how & what the lectures educate them..? That the Malay race is supreme??? Can’t even speak a word of English.

Well, only one miserable place that will take you..! Goverment…!

There are many other races here that has contributed to the building of Uitm. TAX PAYERS MONEY…!

Excellent campaign materials to be shared & printed out ASAP.

Please disseminate at once. Thanks

“dunnoalso” says he’s had a prosperous career after his ITM education. Sincerely kudos and congratulations to you. I’m sure you worked hard to achieve what you have. Imagine how many chinese and indians have had to forgo a tertiary education because of the lack of funds. In all honesty most Malaysian government education institutions are sub standard and almost a joke. Just look at where the Malaysian unis rank in Asia alone ? Most of them come to Australia to do PhD and can’t even write and communicate properly in English The malays not only get a “free”education but also… Read more »

saiful’s celebrated posterior is not going to bring any economic gains to the country. i suggest UMNO go ahead and have his posterior insured at RM1billion. shameful nuts!!! when the economy is going to the drains, there are people out there talking about one’s posterior to gain votes! malaysians are not stupid to buy all this. DSAI, you are on the right track. you talk sense. you talk about the dire state of our economy. you talk about uplifting our standard of living. this is the kind of leader all malaysians want. let UMNO talk about the celebrated posterior of… Read more »

It is so sad to see this happen. All of you guys forget the fact that who is the one who mention this thing up, and who is the one who simply wrap it up like nothing happened before. Khalid is ANWAR’s g***. Why did Khalid suddenly mention this thing up? He knows that this thing might create racial sentiments. … Don’t you see that? They are taking every opportunity to create issues for the government to bear the costs.

As Al Pacino says in the film “Heat”, “you’ve got your head all the way up it.”

Malaysian’s Sensitivities. A Foreigner’s Guide? Sensitiviti rakyat Malaysia? Panduan untuk Pelawat Asing? Malaysians are sensitive like the plant called Mimosa. They curled and closed up so fast the moment something touches them. Malaysians are also sensitive like a woman scorned. Say anything right or wrong and wait for her to unleash the storm. So, if you are a foreign visitor to Malaysia, please be aware of the following, else you may be charged under the Internal Security Act or Sedition Act or maybe get whacked or maybe get a cold reception. 1. Do not talk anything about Pigs or Dogs… Read more »

caravanserai,
UITM is just not only malay.there are some if not many students from abroad as well.what?you said that majority of tax-payers is non-malays?malays also pay tax.mind you.

who says UITM graduates have no quality?.some of my friends who graduated from UITM have a steady job with a steady salary.they studied not using tax moneys but either by their own money or loan provided to them.

every universities in the world have their own policy.the same goes to UITM.why the need to question the integrity and policy of UITM?

{“All it takes is for the right leader to tell them the right thing and they will support it,” marvelled a newspaper editor who witnessed the scene.}

I think you miss the point, this whole UiTM thing was engineered, exploited by UMNO when Khalid made an off the cuff remark because about half of Permatang Pauh constituent is less than 40 year old AND Anwar gets most of his Malay supporters from the young. I bet you that if you ask the UiTM students they will tell you that the protests had a UMNO people pushing it. Anwar had to face the crowd no matter how hostile it could get. The thing is he did it successfully, his support of the young is intact and this is… Read more »

Of course I would not blame the UNIVERSITY STUDENTS. At least, now, I know the human quality of these so called university students (the future leaders in government & corporate world?? with held mentality, wanna have an easy day??) and I believe many employers would really think twice before they employ them!