Perkasa held its first AGM at the PWTC in KL this morning with Mahathir in the spotlight – but estimates of the turnout vary. 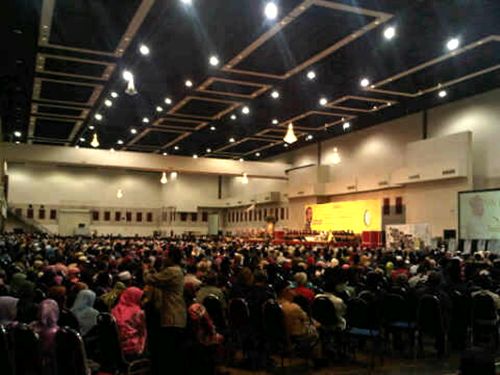 Malaysiakini put the turnout at more than 2,000.

According to blogger Aisehman, the MC said 8,000 seats were put out but the crowd was 10,000-strong.

Aisehman himself thinks the turnout was 3,000-4,000 max, many of them from the older generation. (He had earlier estimated the crowd at 5,000). Check out his tweets here.

Whatever the case, the large hall looks quite full.

When you want to rally your supporters, the easiest way is to focus on an (imaginary?) enemy or adversary. Better still, more than one! Among those singled out for criticism by speakers at the AGM (drum-roll, please):

Hi Gerakan K & Ong Eu Soon.. where are your comments.
Nothing to say? or afraid to offend the M….ultras.
Miss your comments lah.

Do you have some words of encouragement for the Perkasa? you always did find some for BN.

How about, good idea on 67% target based on racial composition! that make Malay really productive!

It looks like some people are so desperate to prevent
Anwar Ibrahim from becoming PM that they are willing to endorse neo-fascism in Malaysia.

Old Machiavellian politicians don’t die, they just
spring up from time to time to torment the younger generations?

Honestly i really can’t see the diff between perkasa and the wackier elements in UMNO.

To me, I was there just to see the happening but not to support. I believe no more than 70% of the turnout was there to support.

These people are the type for Gerakan K. His friends.

“These people are the type for Gerakan K. His friends.”

If Gerakan K is thrown into a cell with those Perkasa people, what do you think will happen to Gerakan K?

The key issue is that the number is a few thousand. These kinds of group are the same everywhere. Its not their number or message to worry about. Its not even their agenda. Its the methods that they are willing to resort to…

The more public they are, actually the better. Its those that did not show up that should worry people.

Anil, Why don’t you do a piece on “Resource Allocation” for what is happening in Malaysia? The resources of this country have been plundered so badly that now almost everything is gone that now they are forced to turn to the virgin forests (what’s left in Malaysia that is still relatively untouched) to find new resources to plunder — that’s what we see happening to the Orang Asli (their ancestral lands have been taken away from them) and the sudden interest in massive dam building programs in Sarawak. Do a piece on how much Malaysia’s resources have been plundered, Anil.… Read more »

This organisation is (allegedly) a proxy for umno. It is formed to do all the dirty racist work for them. Don’t tell me all those protection by the constitution, ngos, umno’s little napoleons, pas and pkr outcasts, pro-gov bloggers and cybertroopers, gov controlled MSM, btn, nep, deb, nem, ros,civil servants, macc, justice system, police and army are not enough. Incredible bunch of clowns.

Aren’t the fears of the majority of the malays – that if they are not protected, they will lose their country to the hard working chinese – justified?

if i were a young malay living in a small flat with a wife and three or four kids, and earning a salary of a couple of thousand and yet having it hard to make ends meet, i will be very afraid of the future if the ‘liberals’ of this country had their way!

At least 10 million people there I feel.Pekasa will become the largest group in the world in 2 years and become more powerful than US republican/democrats combined.Malaysia can be the most powerful nation in world soon.We have a good future

Mr.Anil,
Let perkasa highlight to POOR MALAYSIANS…how a malay hero Dr.M`s son is one of the top richest man in the world….let all this POOR MALAYSIANS understand how socio-economic balance is happening in this country for the past 50 years…..I pity those illiterates attended that AGM….may be they are happy at getting a free lunch lah….

And I am a Malay who is entertaining the idea of migrating.

Hoay, Ibrahim Alik,
Don’t forget who pay the most taxes, to finance you, your children, your grandchildren who need not fork out a single cent while at schools / unis.
For the past 52 years!

And thus begins another era of facism in Tanah Melayu.

Yes, those from the older generations are those that Perkasa can exploit, but, the younger generations are going to have none of it. (Many of) those attending Perkasa’s meeting are those who are probably living on handouts from UMNO Baru, and they needed to be constantly fed.

They still think the younger generation Malays are so incapable and uncompetitive like them….

Mahathir has sink to his low, many chinese will lose respect for this old man.

He is helping to propogate racism.

“Mahathir has sink to his low, many chinese will lose respect for this old man.”

Many Chinese WILL lose respect for that old man?

Are you kidding or what?

You mean, you actually respected (him) before??

Oh boy, I sure got a bridge in Brooklyn to sell ya.

Hi everyone, Why is there no criticism on the ‘hijacking of the NEP’ by the elitists amongst the UMNOputras and BNputras to enrich themselves and their cronies? Why is there no criticism that such hijacking is still continuing – that there is still no political will and effective actions to put a stop to the leaks at the expense of the ordinary bumiputras in particular and all Malaysian taxpayers in general? Is PERKASA formed to protect vested interests to perpetuate the ‘plunder’ of the taxpayers money? Or is it formed to ensure that for every RM1 meant for the ordinary… Read more »

Thank you because all my children are living outside of Malaysia and only come back once a while to makan.

Thank you because most of my money and property is outside of Malaysia.

THE EMERGENCE OF A ‘FAULTLESS MELAYU ORGANIZATION’… THE OCCASION WAS GRACED BY A SPENT FORCE “MAGICAL MAN”….
WHAT A BEAUTIFUL SIGHT, WHAT A PROMISING START FOR THE KETUANAN MELAYU OF BOLEHLAND!!