In a rare landmark visit to a prominent mosque, a delegation of Christians, led by Bishop Sebastian Francis, visited the Abdullah Fahim Mosque in Bertam in Province Wellesley on 14 December 2015. 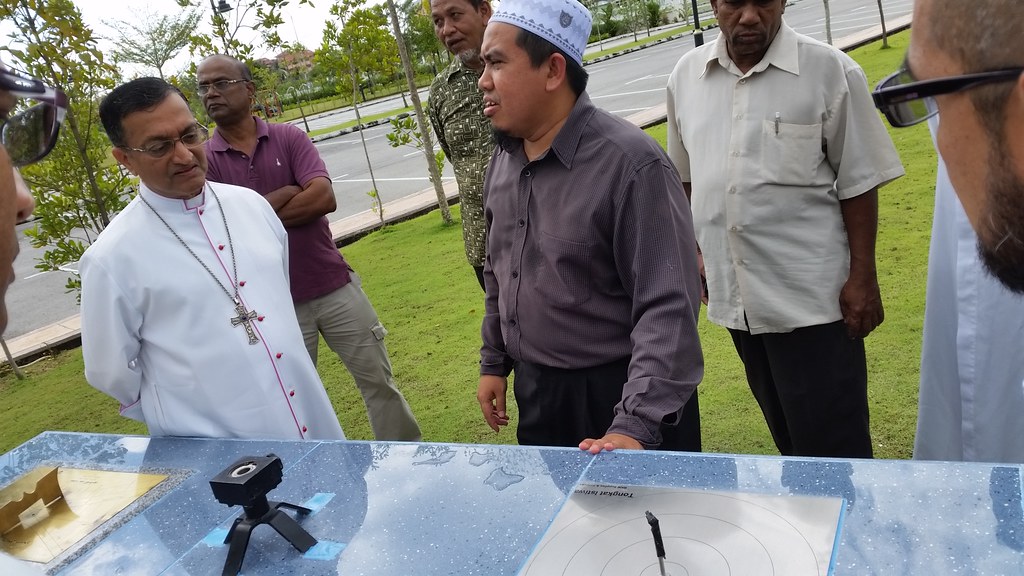 Uztaz Zulkhairi explained the short history of the mosque, which is one of several district (major) mosques in Penang.

The mosque was opened on December 12, 2012. A local resident told me that 12 couples underwent a wedding ceremony on that auspicious date.

The visit was arranged by long-time bridgebuilder Abdul Rahman Kasim, who had previously facilitated the visits by Muslim delegations to various churches in the northern region. This was the first time in memory that a high-level Christian delegation was visiting a prominent local mosque.

According to Abdul Rahman, the blue-domed mosque is modelled after the famous Blue Mosque in Turkey. Bishop Sebastian mentioned to the hosts that popes had visited that mosque several times.

Two local Muslims demonstrated to the visiting Christians how ablution was performed at the mosque before entry into the cavernous carpeted prayer hall over which hung a glittering chandelier.

Inside the hall, the Christian delegation was shown the area where the imam addressed the congregation and the raised pulpit for khutbahs (sermons), which reminded me of the raised pulpits in ancient cathedrals.

Bishop Sebastian made it a point of asking the ustaz how long their sermons usually were.

“Fifteen minutes,” he was told, a point which the bishop then highlighted to his priests. More than that, and the congregation might doze off; so it was important that the delivery was powerful, said one of the Muslim hosts.

Uztaz Zulkhairi then hosted the visiting delegation to brunch at the mosque conference room during which the Christians were briefed about the activities of the mosque via a powerpoint presentation. Also present were several local Muslim activists and politicians and an old friend of the Christians, Ustaz Soib Mohd Amin.

In his address, Bishop Sebastian pointed out to those seated at the long table that this year, Prophet Muhammad’s birthday falls just before Christmas.

He said the Church uses the term People of God to refer to all people, in a bid to be inclusive.

This year, the Catholic community was also marking a Jubilee year for the Church and Bishop Sebastian reflected on the theme of God’s mercy. “The world needs mercy these days, not only justice, but also mercy. At the level of justice, we can argue and fight — and we must — whenever there is something that is not true, that is corrupt… we must be against all kinds of injustices but beyond justice and injustice, the Pope has chosen to declare a Jubilee Year of Mercy for all people.

He then conveyed the greetings of the peace of Christmas from the Christian community to his Muslim hosts.

The Abdullah Fahim Mosque is named after a local Islamic scholar who is the grandfather of former premier Abdullah Badawi.

Hopefully, this visit will open the door for more visits and bridge-building between the Muslim and Christian communities, and take interreligious dialogue in the country to another level.

This article was first published in The Herald.

Meanwhile in BEKASI, Indonesia: Indonesian police fired tear gas to disperse hardline Muslims protesting against the construction of a Catholic church in a satellite city of the capital Jakarta. Several hundred protesters from a group called Forum for Bekasi Muslim Friendship demonstrated in front of the Santa Clara church in Kaliabang, a neighborhood of Bekasi city, after Friday prayers. Witnesses said police fired tear gas as the protesters tried to force their way into the church, which has been under construction since Nov. Some also threw rocks and bottles into the 6,500-square-meter site. Ismail Ibrahim, a cleric and organiser of… Read more »

An interfaith buka puasa event at a Catholic church in Petaling Jaya was cancelled upon the advice of the police. The event at the Church of Assumption, which was supposed to be held yesterday evening, was called off after organisers were informed that a report was lodged against them.

“Someone lodged a police report and two policemen went to the church to warn that there might be an individual or group who might cause trouble,” social cause advocate Syed Azmi Alhabshi said in a Facebook post.

Proposal to Expand Sharia Alarms Malaysia’s Christians By Simon Roughnee (NCRegister.com) KUALA LUMPUR, Malaysia – Like its bigger neighbor Indonesia, Malaysia has mostly had the reputation of a Muslim-majority country that does not oppress its religious minorities. It’s live-and-let-live disposition is far removed from the rigors faced by Christians in countries such as Saudi Arabia, where churches cannot be built nor Mass said; or Pakistan, where Christians are expected to adhere to a strict anti-blasphemy law that critics say favors Islam over other faiths; or Iraq and Syria, where hundreds of thousands of Christians have fled war and ensuing attacks… Read more »

‘Datok Kong’ shrine at the Armenian Street Park in Penang can be a place to promote better religious understanding in Penang.

Did Low imply Najib’s cabinet is not a ‘God-fearing’ one? http://www.malaysiakini.com/news/324626 MP SPEAKS Yesterday, I had asked what the “cryptic” speech of Minister in the Prime Minister’s Department Paul Low at the Christmas high-tea reception organised by the Christian Federation of Malaysia (CFM) really meant – when he said that if the government is God-fearing, then there would be no need for him to be in the cabinet. To the overwhelming majority of literate Malaysians – regardless of race, religion or politics – it could only mean two things: Firstly, that the Najib cabinet is not a God-fearing one, and… Read more »

Interfaith dialogue must be enhanced to promote mutual understanding.

This UK #1 song on Christmas Day is appropriate for the occasion.
The Lewisham and Greenwich NHS Choir’s song A Bridge Over You

Brunei Sultan went overboard with Christmas decree, says Amana
https://sg.news.yahoo.com/brunei-sultan-went-overboard-christmas-014910421.html
Looks like an ulterior motive to protect his own tarnished image which is already public knowledge.
But then God knows what is going on in his bigoted mind.

Eurasia Review: Create Christianophobia In Malaysia, We Must Not! http://www.eurasiareview.com/24122015-create-christianophobia-in-malaysia-we-must-not-oped/ Malaysians are angry and deeply bothered by the recent issue of Universiti Teknologi Mara (UiTM) organizing what was reported as an “anti-Christianization” conference. There is nothing new about the need for such institutions to train students to fear themselves and non-Muslims and non-Malays especially. It is a natural program to instill fear as part of a culture to defend the existence of race-based ideology. It is part of an apartheid strategy of Malaysian education I have written about in many articles. What is new is the question: how do we… Read more »

Sultan Ibrahim Sultan Iskandar of Johor said Muslims can celebrate festivals with their friends and neighbours of other faiths as a sign of respect.

“This is what Bangsa Johor is about. It promotes closeness, tolerance and mutual respect for each other regardless of race and religion.

“We should celebrate this in peace and harmony,”

In contrast, Brunei Sultan Hassanal Bolkiah, 67, has banned his Muslim subjects from even wishing Christians or each other “Merry Christmas” threatening them with fines of up to B$20,000 and imprisonment for five years. There couldn’t be a more stark comparison of contrasts between the very much loved and admired Sultan of Johor! Johoreans may not be as lucky as Bruneians who are entitled to free education and free health services, but they can surely take pride in a ruler who is compassionate and understanding and one who truly respects his multi-racial and multi-religious subjects. During this season of goodwill… Read more »

Sultan Brunei should ban vaping and not Christmas celebration.

The Sultan of Johor said he does not understand why the Malaysian Islamic Development Department (Jakim) needs nearly RM1 billion a year in allocations, just one month after a deputy minister said the budget is not enough for the federal religious agency.

In an exclusive interview with The Sunday Star, Sultan Ibrahim Sultan Iskandar said he wanted Jakim to show him how they spent the money during the next Conference of Rulers.

Such interaction and meetups creates friendly environment.
This is beneficial to all and both sides deserves an applause.
Certainly removes all the mental fear and psychology barriers put in place by certain federal agencies and politicians.
Merry Christmas.

Say: “O People of the Book! come to common terms as between us and you: that we worship none but Allah; that we associate no partners with Him; that we erect not, from among ourselves, Lords and patrons other than Allah.” If then they turn back, say ye: “Bear witness that we (at least) are Muslims (bowing to Allah’s Will).” Al Quran 3.64

Why usually the Christian only visit mosque. Why not temples and others. Seem quite strange is it not

They were invited by the mosque committew after Muslims had visited churches in the northern region.

Azmi should visit temples to better understand the different faiths, but please get clearance from Jakim first.