Children from various ethnic groups participated in a lantern walk at Tanjung Tokong. 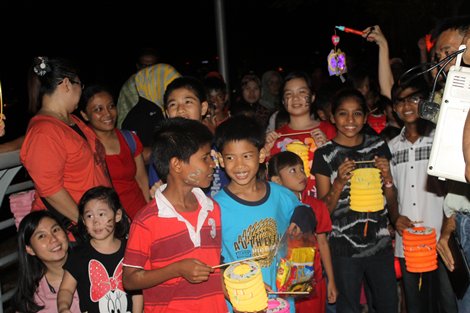 The event, held last Friday, 28 September 2012, was organised by the Jalan Gajah JKKK.

Lim Siew Hock, the chairperson of the JKKK, reports:

The organiser of this event went through roller-coaster emotions and apprehension arising not from the hard work involved in organising this event but from nail-biting anticipation over the weather which had been battering the event area and Tanjung Bungah area for the past one week relentlessly, raining cats and dogs, adding thunderous sound effects and lighting.

On the day itself in the late afternoon, there was a trickle of rain and Heaven must have known and graced our event as the rain stopped and the weather was cool rather than sweltering hot. There were smiles on everyone’s face.

This event saw an overwhelming crowd of more than 500 consisting of 361 registered kids and their parents participating in the ‘Lantern Walk By The Sea’ organised by JKKK Jalan Gajah on 28 September 2012. The children participants were of diverse backgrounds and ethnicity, a well balanced representation from a cross section of Malaysian society in the true spirit of muhibbah – comprising 170 Malay children, 70 Indian children and 121 Chinese children.

As expected, there was also an influx of last-minute unregistered children with their accompanying parents who turned up that night and were also well received by the organizer notwithstanding their being unregistered.

This Lantern Walk was specially planned for the children of Tanjung Tokong kampungs and the nearby neighbourhood to have an evening filled with lots of fun, food, goody bag and prizes to bring back.

One of the main objectives of this event was to promote understanding and appreciation of our Malaysian cultural diversity as well as allowing for the interaction of various ethnic grouping at a young age so that they could share memories of this event that they carry into adulthood. Hopefully, this would further perpetuate our rich Malaysian muhibbah culture that our ancestors had strived so hard to ingrain into us.

After the walk by the sea, these kids were treated to a sumptuous dinner at a cafe. The highlight for the children was, of course, the lucky draw event where three bicycles were to be won. There were screams and loud expressions of excitement each time a number was called. At the end of the day, all the children had won a prize each! Three of them took home a bicycle each.

Smiles were everywhere when the event came to an end. Children left with a fond experience and their hands full, a goody bag and their lucky prizes.

That’s great.. Wished I was there to join in too. My congratulations to the organisers It is a very good idea, and all for the good of this Nation of ours. We have much goodwill and love for all the races in Malaysia. Let us all join hands and very proudly march forward towards the future.

The 170 Malay children, 70 Indian children and 121 Chinese children who carried lanterns that unforgettable night have brought ‘lights’ into our hearts – that Malaysia Muhibbah is well and alive.
40 years from now, these children will one fine day reminisce the ‘good old’ night of 28th September 2012 over Kopi-O kau kau by the sea of Tanjung Tokong.
Putrajaya, what are you thinking in the dark?