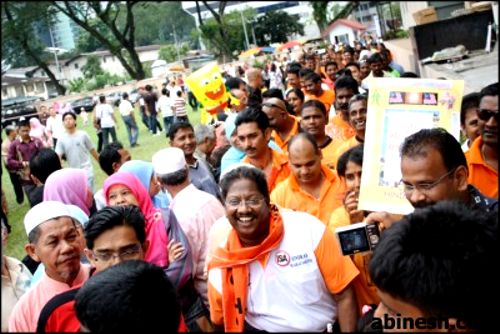 The exact same group visited Dato Sri Anwar’s PKR Hari Raya open house last weekend at Kelab Sultan Sulaiman at Kg Baru. Like the previous open house, the group met outside the venue where they were chatting up the other Malay friends wishing them “Selamat Hari Raya“, with the passers-by wishing them the same and some chanting “Makkal Sakhti” (back at them) in the process. How do I know, you may ask? I was there! 🙂

They were greeted outside by YB S Manikavasagam and YB Zuraidah Kamaruddin and eventually started making their way into the venue of the celebrations.

As they were walking in, there was applause for them and the other Malaysians were chanting “Makkal Sakhti!”, and Hindraf supporters were wishing everyone “Selamat Hari Raya”. They went in and greeted the PKR leaders and, when DSAI and Datuk Seri Wan Azizah came out to greet them after finishing their prayers, they handed DSAI a Raya card, gift and a letter. They then moved out of the main canopy area where (some of them) went to get some food to eat while others enjoyed the company of friends that were there as well.

(Later they) took some pictures at the field with a brilliant view of KLCC behind it – together with some of the law-makers – and left the event. I witnessed the proceedings and it was very peaceful, light-hearted, fun and very Malaysian! There was no drama, and everyone went back happy!

Good for Anuar, good for Pakatan and good for the country.

To Arthur, What happen actually is the hearing was at Mahkamah Sivil 6 at 2nd floor and the judge decided to change to Mahkamah Jenayah 6 at 3rd floor. When we went to 3rd floor the police block the enterance so I ask the officer why there was no police block at 2nd floor and at 3rd floor they block main enterance. And I told him thats a public gallery and he cant stop people from going in. When I move in I was elbowed at chest by the officer.At any point of time I did not rise my hand… Read more »

The idiot’s name is Jayathas… he is the national coordinator… he is thinking of being a hero like his stupid hindraf leaders….
i think he is doing this becos he failed to get a place to act an hero in tamil movie… like basha.. or padaiyappa…

This is the link to the video
http://www.malaysiakini.tv/video/16353.html

I am quite upset with the attitude of this idiot that i see on the raya open house. The picture above depicting the guy wearing the glasses, with a orange scarf around his neck with a white t-shirt. This idiot has a kurang ajar attitude. If you have time, check out this idiot outside the courtroom tussle. It was him in the front, and it was him that started the commotion. Not the police. I was flabbergasted as to how this … can claim to come PEACEFULLY. He was the one (allegedly) PUSHING and SHOVING the police many times, till… Read more »

You don’t have to be Indian to know they are in trouble and need all the help they can get. Social mobility is a real problem, and generally they are left to their own devices as MIC, like other BN parties only take care of their own. Examples are numerous; as long as they can masquerade as representation of the indians they will continue this plunder and leave the Indians exactly where MIC and BN wants them : a state of helplessness. Well, it seems the rakyat are willing to break with UMNO and their BN lackeys. It is a… Read more »

Open house is no longer ‘open’ after that incident. Perhaps we should avoid attending these ‘open’ houses.

Won’t wanna end up in the police station would we?

lol! what’s with the spongebob squarepants in the picss!!

You don’t need police when you have the people’s heart.

Hi Anil Please permit me to make three comments: 1. Progressive politicians welcome interaction with the people and popular social movements. Reactionary politicians shun such movements (and even ban them!). 2. Recent financial events in USA and Europe spell the end of Reaganism, Thatcherism and the right-wing attack on the post-World War Two welfare state and Keynesian economic policies. 3. And what has the Malaysian version of Reaganism and Thatcherism achieved in Malaysia? Rent-seeking capitalism e.g. privatized entities that are de facto monopolies and act like monopolies, massive corruption, etc. Privatization of the water supply —> higher-priced water of dubious… Read more »

Anil, please warn the Rakyat. There may be evil forces at work trying to create an emergency situation in Malaysia… Banning Hindraf (could be) just part of this evil plan. Let us not fall for this trap – stay united and stay calm. JR

they just don’t get it. real numbskull….. when r u got 2 learn. calling ur self minister. WHAT A SHAME…….. maybe ur brain is in ur……………. don’t let power get into that …skull. u r suppose 2 serve d country that is MALAYSIA.understand ALBAR…..

Now Hindraf had been declared illegal by the home minister.

Home Minister Syed Hamid Albar What Are You Going To Do With Utusan???/a>

What’s with the Spongebob? 🙂

Moral of the story is simple….
“Respect is Earned not Demanded”
Najib and ABB demands it, DSAI has earned it”
People must willingly give respect and you cannot demand it with fear of reprisal!

This should be the correct atmosphere where all races are united unlike the one at our PM’s open house where they and UMNO made a big issue out of the whole thing. Instead of embracing and listening to people who have problems, they chose to make it into a racial and police issue. What a big difference! Good on you DSAI and all PKR supporters.

I just don’t believe it. A visit to an open house can end up being grill by the polis.

THIS is what open house is truly about… Open, welcoming, warm… not some line up and wait for leftovers like the homeless at a soup kitchen style adopted by some…