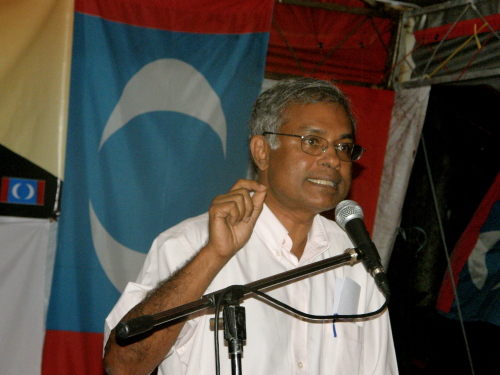 Giant-killer Dr Jeyakumar Devaraj joined in the by-election campaign last night in Seberang Jaya. He was introduced as the wira (hero) who defeated the long-time MIC president Samy Vellu in the general election. The crowd cheered loudly.

In his address, Kumar spoke about the impact of economic recessions of the past. “Each time there is an economic slowdown, Umno would be split as they fight over which cronies to rescue,” he pointed out. “This happened in 1987 and 1997-98.  The same thing is happening now.” In the process, racial issues would be raised to deflect attention from the divisions in the party leadership.

Accompanying Kumar were his team of activists and supporters, who were seen distributing reading material and Abolish-ISA badges.

Kumar, however, had to cut short his appearance and rush to a nearby police station with a few of his colleagues to assist nine Hindraf supporters, including two women, who were detained by police for taking part in a protest against a rival group claiming to be Makkal Sakthi supporters earlier in the day. He was at the station talking to the police until well past midnight.

Apart from Kumar, other speakers at the ceramah included his brother-in-law Dr Xavier Jayakumar, Gobalakrishnan, Azmin Ali, Hatta Ramli, Wan Azizah and Anwar. Gobalakrishnan, speaking after Anwar, lashed out at the police for their action against the Hindraf supporters.

PROTESTS Protest by the People is part of Democratic Sysstem of govoernment. It can been that the BN Politicians – particularly the current ones – e.g. Abdullah, Najb, and others do not understand DEMOCRACY They must go and learn Democracy and Law which binds everyone. It is pity that BN has leaders who do not understand what they are talking. They want to create an ISLAMIC STATE in Malaysia. But Federal Constitution is very clear. This is exactly happened in 1912 – the People were protsting against the atrocities of Dzar – but Police shot at them and nearly 100… Read more »

The Giant killer is a goodman.
The problem is giant MSM news control by warlords.
They creating havoc by telling lies.

Its seems “SUMPAH” – is word of the day for the warlords.
Why? – for people who ignorance about religion.
which people, what race and what religion ….up to people to judge who are they.

rajraman.not 666 worshipper or neither god.Just came to remind someone still hacking my hotmail,thinking i am devil666 for the warlords.

I don’t know if the millions poured in by the BN government would decrease the odds that this would be a runaway election for DSAI.

I heard some bookies were reducing the majority of a DSAI win to only 3,000 votes.

Whatever is the outcome, I believe this is going to be the most expensive by election the people have ever witnessed.

To the people of PP , JUST DO IT ! Lets vote Anwar back to Parliament. We have nothing to lose but more to gain.

again in permatang pauh sitting a coffee observing the enthusiasm shown by DSAI’s supporters. chinese, malays and indians are showing a positive team spirit in calling for all people to vote for anwar. they look so cheerful. most BN stalls wre empty. BN supporters have deserted them. jeya’s ceramah drew a crowd of more than 3,000, among them were BN supporters who are disenchanted with umno. looks like many BN supporters are not doing pak lah any favour here. an umno man quipped, ‘giving anwar a landslide victory will put pressure on pak lah to quit. this is what the… Read more »

Dato Seri Anwar is our only hope to bring Malaysia back into the ranks of civil society. Malaysia is today lawless and (sections of) the police and the judiciary is a meanless joke and what is wrose is that (some) Judges do not know their Law. If judges do not know the law how are we to obtain justice in the courts ?

Great slayer of the decomposing Samy Vellu, keep up your good work and remember to maintain your services to the people of Sungai Siput.

And DSAI will be Be End (BN) Terminator and Giant Killer. Hurrah! Amin.

Dr. Jeyakumar Devaraj is a true Malaysian at heart. A simple man whose mission is to serve the people. His father Datuk Dr. Devaraj is also another person with a big heart. He is the person who heads the Penang Hospice, a great and humble man. This father and son earned my utmost respect.