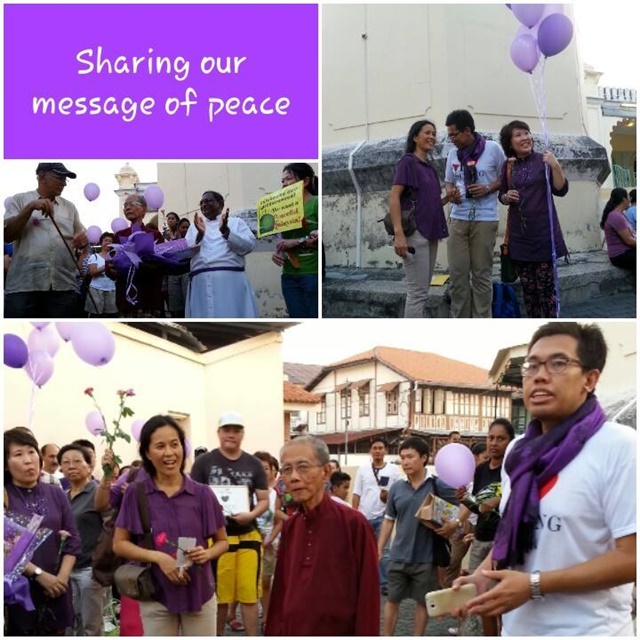 On the same day that meat was provocatively left at the entrance to a mosque on mainland Penang, another group of concerned Malaysians participated in an inter-religious ‘Walk in the Park’ which took them to several landmark places of worship in George Town this evening.

One of the participants, Betty Siew, said on Facebook:

What an awesome time we had this evening: the weather was great, the crowd was wonderful, from every walk (of life), young and old; and even as we walked the route of Harmony, many just walked along to join us. Thanks and kudos to the organisers, Jenny Liew, Aida Redza and all the way from KL, Azrul Mohd Khalib, for making this happen in The Pearl of the Orient!


This is the second such walk. The first was held at KLCC recently.

… the event went on very well! Participation was beyond expectations. Really thankful to God for His favour! …took us a while to organise ourselves as the group was quite big. … awesome support from Padre Charles Samuel and members from St George’s! A big THANK YOU.

This is the Malaysia we hope to build. Won’t you step forward as well to realise this vision?

LGE says with the rise of new media, Umno is finding it difficult to continue painting DAP as an anti-Malay party.

Anil, have I been ‘hibernating in my little cave’ THAT long? I was not aware of this event.

In the future, can you please promote these events in your FB page as well. Maybe you did..maybe I missed it.

Malaysians should support these events – especially in Pakatan led states. Umno is definately planning something, an emergency rule perhaps?

Okay, will try and do what I can. Unfortunately, I only found out about this event rather late.

Thanks to the group who walk the talk and the organisers too. A job well done !!!

The people want peace & unity, but the dirty politicians want only personal gain! So good to know that Malaysians are not vulnerable 🙂

A good question for all to ponder:
Why anti-Malay acts only in Penang and Selangor?

Better yet, taunt Zahid Hamid and Najib who were so eager for Jakim police – where are they to find the culprits – and not find scape goats who could be just pretender.??

They should have insisted the police find out the culprit of the meat-at-mosque incident. Condemn the act, Taunt the police – insist they get the people behind it and punish them to the full extent of the law..

When Love Peace folks appear in big group the “kacau” folks dare not stir racial threats !
Many for past few months dare not speak at Speakers Corner of Esplanade as apparently there are still “hired thugs” causing commotion to strike fear !

1. The smart way to deal with Neo-Nazism !