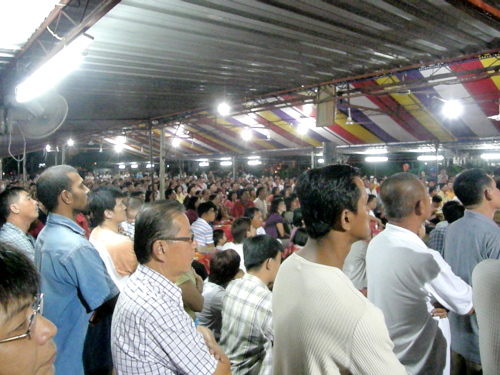 Any lingering doubts over who the Chinese Malaysians voters of Seberang Jaya were opting for were dispelled last night when about 3,000 people turned up to listen to Anwar and other PKR speakers such as Nurul Izzah and Azmin Ali. It was not so not so much the actual numbers but their enthusiastic reaction and body language and the way they warmed to Anwar’s speech. 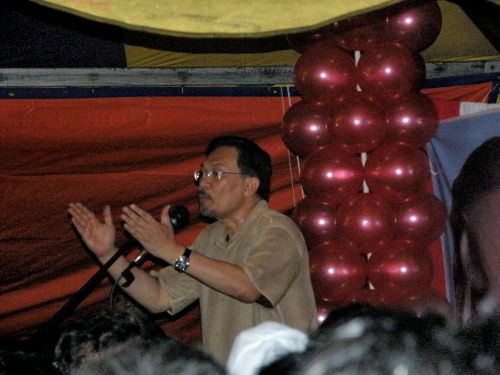 Anwar was of course in his element and tugged at what was close to the hearts of the crowd – education, language and the economy. He stressed the importance of Chinese as a language of economic significance. He said that many people even in the United States were learning the language. “It is not because they love China, but they realise that it is a language of economic importance.”

He took a jibe at Hishammuddin and his keris and said the Umno folks were not very savvy about this, and “that is why you should not vote for them”.

He said the BN was out to get him with all sorts of allegations. “They say that I like women, I like men… I like goats! (crowd roars with laughter) Let them say what they like…”

But, he added, the number one issue facing Malaysia today was national unity. Loud applause broke out.

Blog reader Ah Pek, who says he is a life member of the MCA Bagan Division, shares his view with us:

An observation when I was in my friend’s house in Permatang Tinggi, about 3km from Anwar’s kampung:

The local residents, especially the Malays are now firmly moving over to support him this time. I had seen numerous vans busy shuttling loads of their mak cik and pak cik as late as 11.30pm. I reckon Pas now is working super hard on our Malay kampung folks.

What BN (has done) by reducing the price of petrol makes thing worse. The word is that Pak Lah is just calling the shots on petrol price and has total disregard for the lower income and poor, manipulating it at his fancy.

As for the Chinese folks, esp the Seberang Jaya market and hawker folks, they wanted to teach Ariff a lesson for (allegedly) shouting at them when they approached him for help as their State Assemblyman last few months, and were (allegedly) scolded for having PR as the state government. Kak Azizah had already got them onto her side when she send a team of plumbers to clear up the clogs and fix new taps. 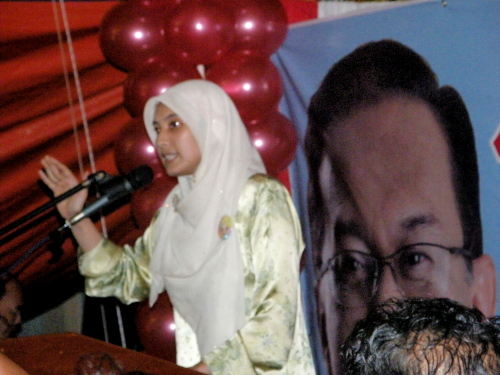 Also on hand was Anwar’s daughter Nurul Izzah, who is rapidly turning into a public speaker in her own right.

Tomorrow morning, I hear that the DAP are heading out to Seberang Jaya in a big way to help in the campaign. Apparently, the Pakatan folks are holding a big event in the morning there. The Makkal Sakhti folks are also planning a major event over the weekend. The action is hotting up!

Meanwhile Najib has made his oath on the Altantuya case, but check out yet another startling statutory declaration here. I don’t know whether to laugh or cry!

Thanks for keeping us updated.

Agree that the timing of the petrol reduction is political. Not much price difference when they up it 41% and now. And both AAB and SHahril was caught lying.

May God protect and enable to just and free election in P44.

If you don’t mind, can I correct the heading of your post.

“All right and fair-thinking Malaysians of all races and religions are throwing their weight behind Pakatan”.

And I believe they are the majority in P44. The only buffoons in P44 are not local but from Putrajaya!

I cannot wait to read the congratulatory messages to the voters of P44 come this Tuesday.

Dear Anil, You are doing a great job keeping us in the Klang valley well informed on the activities in PP. We know DSAI will win but anything can happen and DSAI MUST WIN for old folks like me to gave a better Malaysia. Senior Citizens are very badly neglected by the ruling BN and this must change. We want our golden years to be meaningful. And it can only be meaningful if we are assured that our children and grand children have a place in a better Malaysia that is non racist…..a Malaysia for Malaysians, working together for a… Read more »

nurul has performed extremely well here. she speaks impeccable English and Malay, charismatic and has won the heart of thousands of people here. she is only 27 and yet so matured. she will soon outshine her father who is now 61. many here believe that she will one day end up leading the country. wherever she goes, she gets the crowd. no BN woman leader can match her talents, oratory skills and intelligence. she is a gem of politician. sharizat came here the other day declaring her version of ‘jihad’. she failed miserably. An elderly woman commented,’… seperti saiful tu… Read more »

most chinese i talked to wanted a strong opposition in the parliament and they believed that anwar could do the job at that level. in the case of ariff, they feel that by voting him in would only add another MP for BN and this would serve little purpose for the people. even the malays i spoke to believed the same. one of them quipped, ‘tengok tu, kerana anwar harga minyak dah turun sedikit. BN takut pada anwar, terus diturunkan harga minyak. kalau anwar masuk parlimen lagi hebat. kami orang miskin. kami nak harga barang keperluan turun. harapan kami adalah… Read more »

Right now public perception of LGE is excellent and many are grateful to DSAI for making this happen. ie. he was able to overcome the fear of the Chinese community of a Malay backlash in the Mar 8 GE.

I believe DSAI will be able to get close to 95% of the vote from the Chinese community.

Khairy…lets hope you live to regret what you said.

Penang Chinese will give full support to Anwar. He but no body else can be Malaysia PM.

Permatang Pauh Chinese don’t be fool by UMNO tricky propaganda …, we must hold our respect even BeeNd party throwing a lot of golden bullet to us. We are not beggar, every year we make our donation. Now they give us money…

MCA and Gerakan is BeeNd …, forget about them and ‘bury’ them with Khairy in Permatang Pauh. …

The Chinese priority is in economy and follow by education. In Malaysia, the economy is in distress and the education standard is much to be desired. To add insult, racists are aplenty. Common sense prevails that no matter how the government is trying to convince the Chinese in P.Pauh with funds to Chinese schools (and may I ask what about Indian schools?)does it mean the government is doing the Chinese a great favour? This shows that the government depend on the Chinese votes and cares two hoots about the Indians in P.Pauh. Remember, there is no one race who is… Read more »

Anil. Don’t cry or laugh. Just let’s pray that God’s Will will be done.

as for laughing or crying, I recall a Chinese saying transliterated … “Ti Xiao Jie Fei” – direct Manglish translation = “Cry Laugh both also not!” 🙂

We will know soon on August 27, what comes after the tears and laughter … Thanks for the on the ground coverage.

I knew all along that reducing oil prices at this stage is not going to win votes for BN. It’s the timing that stinks. The public has been groaning about the effect of the oil hike but apparently their voices can only be heard when there is an election. Giving money to vernacular schools is an insult to the minority communities. Do these schools have to wait for an election to receive aid from the government? Who is directing all these BN strategies? Malaysian society has matured but BN is still treating the public like kids. Putting polling on a… Read more »