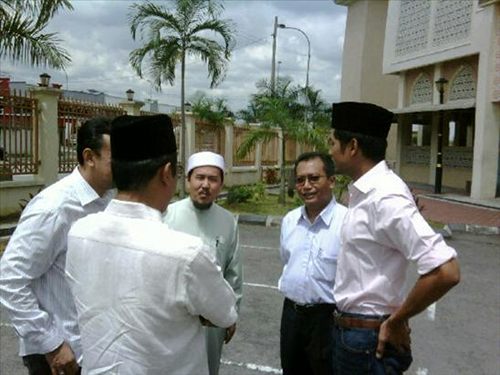 Khairy with a few Umno Youth leaders at the Bkt Sentosa Mosque – Photo posted by Zuhri, retweeted by Khairy

Social reform movement Aliran has expressed outrage over the incidents.

News of the sacrilege broke when Batu MP Tian Chua and Umno Youth leader Khairy Jamaluddin both twittered about the incidents that took place at the Al Imam Al Tirmizi Mosque in Taman Seri Sentosa and the Jumhuriyah Mosque in Taman Dato’ Haron, about two kilometres apart.

News reports said that four wild boar heads – two at each mosque – wrapped in plastic rice bags were found. At each mosque, a bucket was placed next to the severed heads with about RM30-RM40 in cash strewn around.

“According to a local Dan Brown, it’s an underworld message,” said Khairy, who warned Malaysians not to fall into the perpetrators’ trap. “Whatever the motives, I’m afraid the nuances of moderation will be lost on the mob. Leadership. Now.”

Khairy later visited the Kg Medan mosque and walked around the area talking to residents. He appealed for calm and met the local PKR MP and Pas supporters, urging everyone to work together. “I will be calling my counterparts from Pas, PKR and DAP to ask for a common statement with BN Youth condemning all attacks on places of worship.”

Lembah Pantai MP Nurul Izzah Anwar urged the government to set up a Royal Commission of Inquiry to investigate recent attacks and desecration of places of worship.

The Malaysian Consultative Council of Buddhism, Christianity, Hinduism, Sikhism and Taoism (MCCBCHST) condemned the latest incidents in a statement. They “demonstrate how sick perpetrators of such acts can be and to what extent they are willing to go to cause hurt and harm to religious communities.

“Their end is to drive a wedge between religious communities in the country,” said its president Rev Dr Thomas Philips. “We who are law-abiding citizens must not allow them to succeed in their wicked mission.”

The other disturbing news is that 10 people, including nine foreigners, were detained under the ISA last Thursday for alleged involvement in terror activities.

Certain quarters appear bent on inciting religious hatred. So Malaysians, please don’t fall into their trap as they become increasingly desperate to break our unity.

We are a lot more mature now as a nation and we can sense the agenda behind many of these recent incidents.

Those responsible obviously do not want the people to remain united, and they are trying all sorts of despicable stunts to break that unity.

So far, Malaysians have shown exemplary restraint in the face of such provocative acts since 8 January. Let’s hope that restraint continues.

This brings the tally of religious sites affected since 8 January to 18.

Maybe this is arson plan B? since plan A didnt work in Muar? Its plainly obvious that some sector is hell bent in wanting to start racial unrest. Now who could that be? Who stands to gain a lot from this? Its a no brainer actually.

HOw difficult is it to track the culprits? THey already have the plastic rice bags as evidence, just search for finger prints & u’ll be able to see who’s been handling the bags.

Haul up all those machais who desecrated these houses of worship and send them to civic classes as well as 96 hours of religion classes, including Islam, Christian, Buddhism, Hinduism!!

Like crime, this things will continue and escalate so long as BN/UMNO is in power. Any steps taken will be temporary respite. BN/UMNO has no solution to this the same as it has no solution for crime and economic growth without new taxes..

If you know how expensive pork is these days, you’ll realise that no Chinese will throw a whole head away just like that!

Anil The culprits (public seem to know who committed this and other similar acts since last year). They have done the most unthinkable, which you will never hear or find in any other parts of the world. 1. Drag a cow head and place at a government building to humiliate the HINDUS. Actually, they offended their own God! 2. Walk into a Catholic church and desecrate Holy Communion, which Catholics hold sacred and strongly believe that only if you have not committed sins AND especially mortal sins (like rediculing another race or religion, practising racism, greed and abuse of power… Read more »

“Zulkifli Mohamad, the imam who leads prayers at the Al-Imam Al-Tirmizi mosque, called for calm and said Muslim saboteurs could be behind the latest incidents.”

Hmmm this incident to me seems like someone is trying to send a message to these mosques. Look at what was found a head of a wild boar. And a RM30 note.

Question, why was it not a normal domestic pigs head? Did the perpetrator not have access to a normal pig? And what does the money signify?…

Yes, they failed to incite the Muslims…

They also failed to incite the Indians…

They, then, tried the Silks yet they failed again…

Now, they are getting bolder as they are at their wit’s end…

May God save Malaysia, a beautiful land actually minus all the self seeking politicians …

God is watching, be afraid, please be very afraid of your evil deeds…

Mr. Anil, is it true that 50 had been arrested under the ISA for terrorism threat? Are they from the PR? Any idea who are those arrested? Is the one at the Perkasa ceramah, one of them? Thank you.

Bon said 38 were released the following morning, while the rest are still under detention.”

Now this is disturbing, that they are resorting to this draconian law again.

I have to try and get more info.

Anil, according to Malaysian Insider, nine foreigners and one Malaysian have been arrested under ISA for “terrorism and international terrorist networking”.

Wonder why this happen now?

When will there be an end to this madness? When will those crazy people stop their despicable plot? Just what do they want? Malaysians, let us all show strength in this time of high tension and extreme provocations. Let us unite and show the world that we are stronger than expected. The work of an extreme group trying to create disharmony and hatred amongst the races must be stopped. By staying calm, very calm, we can together show these people, in this mad episode in Malaysian history, that we are far stronger and united than expected. We had came out… Read more »

The mosque, church & temples should set up surveillance or employ guards esp at night and police to increase their patrol. That should be able to solve the problem.

This really is going overboard. Any acts to desecrate holy houses of worship is condemnable & despicable. Its as if these ppl have no respect for God.

Perhaps money is their God…

It isnt “my” God or “your” God. We all believe in GOD, no matter what name we call Him, no matter how we worship Him. What’s most important is we hold God in our hearts & practice His love towards ALL mankind (not just one ‘superior’ race)….

… One way to deflect attention on real issues the malaysian electorate are facing-Corruption, Nepotism, Racial discrimination, security among many others is to creat a racial/religious dispute….

All Malaysian should stand together and facethe common enemy…!

Dear friends. The source of creation must be the same and this source is what the people call CREATOR or GOD or by any other name that suits the people. It must be the same source of “ENERGY” that created this universe and the contents in it. And this source of “ENERGY” is what we refer to as the DIVINE POWER. Let’s be a little more intelligent and appreciate life the way we are created. This DIVINE POWER is being “worshipped” by almost all human beings and we see the many paths and directions to it. The SOURCE of target… Read more »

This is terrible, a despicable act that must be condemned by every peace loving Malaysians! Whoever are responsible, have they lost their mind?

So (the incidents appears aimed at creating) further animosity and chaos whilst we are reminded of the planned takeover of Selangor to be just days away – Feb 2010?

I hope the PDRM will act fast – enforce the law of the country to the fullest without fear or favour, and swing into action before those scumbags (cause more damage).

Please visit http://www.malaysiakini.com/news/96552 for the previous case of kepala lembu I mean babi placed in surau. With PAS flag as the lapik and the Quran not scattered, it should not take long to figure out (who the possible) perpetrator (could be)…

I as a Christian reject this violation of places absolutely.

I am glad that after 50 years, the people, the Rakyat, the majority of us are awaken now…

We can see and are able to differentiate between lies and truth.

They ARE desperate, aren’t they?

What do they want exactly?

Why did’nt the authority reveal the culprits that threw cocktail bombs at the two Surau in Muar. Were they embarrassed?…

Who are these “… Mischief Makers”, just use a bit of imagination, it is not very hard to guess!!!

Kindly stay away from our local issue. The migrated betrayal not qualified to speak on Malaysian issues.

For your reading pleasures in the event you have not read this. I mentioned APCO to you in our past exchanges of opinions, here, I provide you more information of this organization. We surely have much to fear, or do we not, bro?

I think such acts are bound to fail. The same went for the cow-head stunt … in fact, I am wondering (who is) responsible…

And oh yes, for anyone who can do this on the quiet to the houses of worship, they are too smart to be caught…

All Malaysians should come to condemn the latest attempts to create tension and disunity in our society.

But, just doing this is not enough – the authorities, especially the Police, should use its resources and with utmost urgency to nab the culprits and those ‘plotters’ behind these acts!!