Yesterday began with some trepidation but in the end bridge-builders trumped would-be ‘Bible-burners’ with a series of unexpected initiatives to seize the day. Here is the story in pictures.

Uniformed and plainclothes police, MPSP enforcement personnel and journalists kept a sharp lookout at the Butterworth padang – but no one turned up. In the background, to the right of the petrol station, is the four-storey Butterworth Police Station.

Meanwhile, up north in Perlis, Parit Buntar MP Mujahid Yusof Rawa and Tasik Gelugor Pas information chief Abdul Rahman Kasim were interacting with seminarian Bro. Louis Loi and a participant before kicking off a dialogue with about 30 parishioners at the Church of Our Lady of Fatima in Kangar.

The photo above shows a participant at the dialogue in Kangar querying Mujahid on Pas’ stand on the rights of people of other faiths. Mujahid responds: “Pas guarantees the rights based on the spirit of the Federal Constitution. Islam as the raison d’etere of this country does not mean other faiths are oppressed. The recognition of other teachings known to the Malaysian environment is given by Article 11, and Pas will stick to the rights by improving it through dialogues and talks.”

Later, at noon, a group of young Malaysians gathered at the Esplanade in Penang to read and reflect on various religious and spiritual texts – under the watchful eye of a group of plainclothes police and journalists. The reflections were facilitated by actress Mislina Mustaffa (wearing a red scarf). 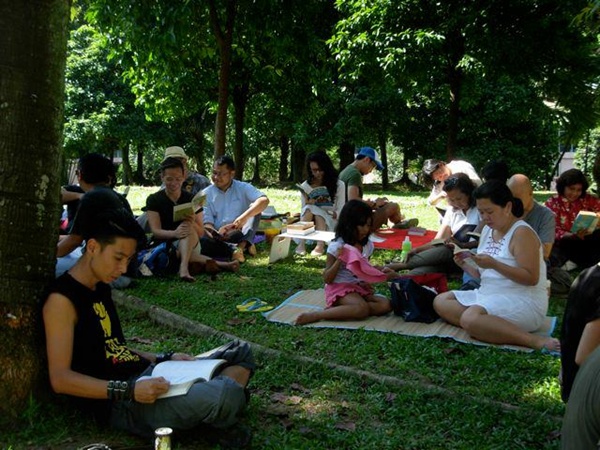 Simultaneously, in the Klang Valley, a similar reading festival was held at the KLCC park. The event, attended by about 40 people, was organised by Masjaliza Hamzah of the Centre for Independent Journalism.

Later in the afternoon, Pas spiritual adviser Nik Aziz Nik Mat celebrated his 82nd birthday at the residence of Karpal Singh, which lies smack in the middle of the most congested Thaipusam route, Western Road. It’s a small miracle his convoy made it through – though a special permit helped.

Finally, at 6.30pm, Nik Aziz held a closed-door meeting in his hotel suite with Bishop Sebastian Francis of the Diocese of Penang – to draw the day’s events to a fitting close.

A final thought: should we have a law (following due process) against any clear-cut or obvious attempts at inciting ethnic or religious hatred i.e. hate crimes?

In any case, blessed are the peace-makers.

Now, can we go back to finding out more about what happened with the registration of those voters in Sabah in the 1990s – and the state of our electoral rolls today?

This clearly ss hows the reverse of what is expected of the “katak” we have proved them wrong that malaysian despite our race & religion ,we have been in this beloved country from many years & many more to come if we do not allow such people, party ,to take advantage religion,race as a tool to break our unity as malaysians….don’t be fool , we have been fooled for 50 yrs do you want another 50 yrs for our generations to be fooled again & again…wake up malaysian..my full & sincere respect to Tok guru for what he have done… Read more »

Not too different to what the French, American, Israeli settlers and Dutch did in recent years. There they burned the Koran, depicted the prophet in an insensitive and demeaning light, made public statements about Muslims (Franklin Graham and the Pope who both called it an evil religion) and the list goes ever on. So the threat to burn bibles was a huge event for Malaysia’s “progressives?”. What about the burning of souls by the Christian clergy? pedophilia, sex abuse, child abuse and general abuse of the poor and the weak. As the Chariot roles down the hill it tales along… Read more »

A decisive public rejection of the neo-fascist aspects of Mahathirism !

Malaysia is a multiethnic, multicultural society. We have had centuries of
mixing and inter-cultural contact and tolerance of other creeds.
Fascistic attempts to stir up serious trouble between
ethnic and religious groups will fail (especially in the Internet Age).

To borrow the phrase from Benjamin Franklin,
Malaysians either “We hang together or we hang separately”.

Mad Emperor Nero fiddled on the roof while Rome was burning.
A leader that is oblivious to the state and welfare of his people is absolutely HOPELESS.
The whole nation is sitting on a powderkeg while the ONE fumbles with a lighted match stick.
This is a deadly serious matter which our ” great” leader is incapable of comprehending.
We have to pray to our divine great God to protect and Bless this beloved land of Malaysia.

What is MCA view? MCA is keeping quite after one of its henchman blame Dap and Pas for the bible burning

We have no confidence in a Prime Minister who remains silently silent when the nation is burning. How can we believe he will dose the fire?

Is the affairs in Gaza more important for him to attend to?

Irresponsible leader run away from crisis.
We have just witnessed one.
So why mus we give him mandate to rule anotehr term?

Hi everyone, The so-called 1M PM has remained SILENT till today over the FROG’s call to burn the bibles! The least he could have done is to condemn such a call that does not take into consideration the sensitivities of a multi-religious society, instead a call that only cause division rather than unity! Or is he QUIETLY condoning such an act for certain political motives? Religious bigots should be consigned to the dustbins by all rational-thinking Malaysians. It is great that we have Tok Guru, the Parit Buntar MP Mujahid Yusof Rawa, Tasik Gelugor Pas information chief Abdul Rahman Kasim… Read more »

Those bigot and the fat toad thought that they could garnered out the people with their racism and religiousm for the Bible burning but Malaysian from Malays, Chinese, Indian and others have seen through their lies and deceit. They have given the answer. Enough is enough. We are a multi racial country and we do not want extremism. Anwar and PR were right to take a moderate stand but UMNO BN and Ah Cheap are still quiet and dumb not condemning the action and remarks of these extremist. Now it bodes well for PR and let us take them to… Read more »

Nik Aziz has demonstrated to us the TRUE Satu Malaysia spirit.
Najib meanwhile escaped to Gaza to stroke Hamas.