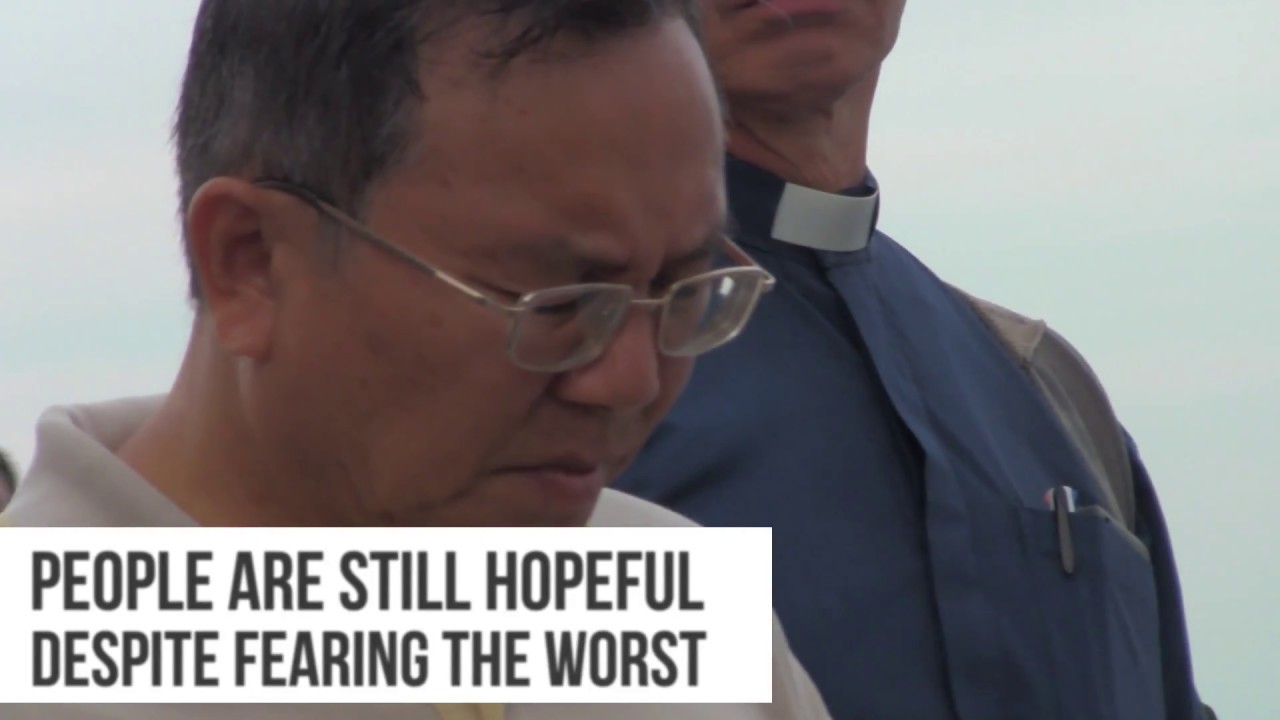 Strangely, the pastor’s family apparently has no idea where the CCTV footage of the abduction came from.

The footage shows us what appears to be a professional job involving a number of men in three large black vehicles, two sedans and a couple of motorbikes, with someone even emerging from a car to film the operation while others blocked traffic from coming too close.

This quick operation, choreographed to clockwork precision, must have required considerable resources, training and practice. What kind of shadowy or rogue group in Malaysia has that kind of ability?

The police have shown us in the North Korean case that they have the ability to track down suspected assassins in a crowded airport and trace them out of several million people in KL.

So let us all pray that those who detained the pastor will be identified and arrested and that Raymond is still alive and will be freed.

I wonder why the media has not given this news as much prominence as the North Korean case, which made front-page/headline news for several days running. The authorities and political leaders too have been rather low key about this.

Former IGP Khalid Abu Bakar has suggested that those who abducted Pastor Raymond Koh could have learned their moves from a movie.

“You can see in the movies every day. Can learn from the movies,” he told the Suhakam inquiry into the disappearance of Koh and several other activists.


Susanna Liew, the wife of missing pastor Raymond Koh, penned an open letter to the inspector-general of police Khalid Abu Bakar, expressing her devastation at the lack of updates on the case – before wishing him a “happy retirement”.

“The police have not handled Raymond’s abduction as you usually handle other kidnapping cases, especially in the way you have withheld the coordination and communications support normally given to families of kidnap victims,” she wrote, 200 days after her husband’s abduction.

Still missing after 50 days as more vigils held for Pastor Koh http://www.malaysiakini.com/news/378065 COMMENT | Fifty days after his mysterious disappearance, Pastor Raymond Koh’s abduction continues to be a major concern to the Christian community both in Malaysia and worldwide. His disappearance remains a mystery to some, but a cause of speculation for many. If not for a closed-circuit television (CCTV) video clip that went viral, most of us would have wondered what happened to Pastor Koh. Others, including one Joshua Hilmy and his wife, have also gone missing at around the same time as a social activist, Amri Che… Read more »

How about engaging the Umno’s Bomoh with coconuts to help locate the missing pastor?

they arrested the North korean culprits with “lightning speed”. Let’s give the IGP a chance to do in a the next few days what he believes – shut up and he could be found. The CCTV would be extremely useful

PDRM is famous for selectively efficient according to its master’s order.
Need a J Revolusi’s UTK operation to rescue pastor?

IGP Khalid said: “Shut up and let us do our work,”

He said speculation on the case put the life of the pastor in danger and urged all “not to talk so much about it”. He said police should be left to do their work in investigating the incident and that candlelight vigils were not helping.

IGP dare to talk like this to Kim Jung Un of North Korea?

All the buzz about the skills, technique and resource of the abduction BUT there are few discussion of WHY? He is an evangelical pastor..What is so bad he has done or resulted from what he has done to warrant this?

Possibly overzealous in preaching and ‘crossed the boundary’ that is so sensitive in this country?

In our hearts, we know why. No need to say the obvious.
More importantly, we want to know who are the criminals based on the video, the victim’s profile & the timing of such crime.
The more the public know them, the less they may want to commit the same crime in the near future.

Can you please elaborate as many of us do not know why.

If I tell you, I may be accused of saying something that may provoke those religious bigots.
If you are not an Evangelical Christian, I forgive your ignorance.

What is the unique feature of Evangelical that got the pastor into trouble?

Salvation.
Bringing the Love of God to mankind, to lost souls.
John 3:16 – For God so loved the world, that he gave his only begotten Son, that whosoever believeth in him should not perish, but have everlasting life.

Too much of the above can be disconcerting to some.

Hopefully Pastor Raymond is safe. The fear is that he may have been undergoing some form of rehabilitation to transform his faith into what such organised squadron want it to conform?

This is a country which had been forced to and had proven itself to be truly incapable, unprepared and sadly mediocre by any standards to deal with a crisis. Time and again the Police and institutions of the Government had let the people down and had shamed and embarrassed Malaysians world wide. An abduction in broad daylight stayed unresolved for so long? It is sad but we have to admit their tidak apathy and lacked of response (with video evidence, which had claimed to true by the pastor’s family) to a serious crime so blatantly committed is baffling. The institutions… Read more »

Ori, whenever there is a heavy down pour & traffic jams (surely) ensue at traffic junctions in Penang, you won’t find a traffic polis (pek ka tay) around to direct traffic.
This is in sharp contrast to the 70s, 80s & even 90s.
What the hell does Malaysian gomen employ so many polis-men (for what purposes)???

Waiting around the bush – for traffic offender.
Waiting and looking for illegal foreign workers ( you know i know lah)

of course we continue to elect the old guards as comfort zone. or abstain. so the system remain until thy kingdom comes

I felt the anxienty felt by the Public.The print media news like STAR never attract much my attention but this video make me chill.Hope the Pastor not harm but the video looks scarry.

rajraman.This country like doom.One guy said emulate ISiS.The Ulama have free days issuing statement against others religion.Jakim have field days what is halal and haram by name…
With Hadi Bill with UMNO support – days a numbers and we heading towards intolerence of others believed and rights of worship.

This video surely chills.
This kind of modus operandi is not a typical gangster act.
These ‘criminals’ surely have had some form of pro-training similar to commando’s –
surveillance > ambush > siege > capture alive
My suspicion (of the most probable criminal profile) is as good as yours.

If anyone wants to inculcate fear (to others), this is not acceptable.
The world is watching out enforcement agencies before the Ringgit falls further down the road.

The North Korean crime can act on it so fast, but this?

rajraman.World superpower just watch because our country important to them.As long our country not a rascall to them,they will be silent.They provide Sadam Hussein with weapons to fight Iran.The provide Mujahideen to fight Russia and both country become a rascall state to them.Thats how super duper power of the world watch.
We are top 19 of world list in terms of export but our ringgit might be the top worst perfomers in leakage.

Anything with an agenda of evil is the work of “S.O.B.”
Anil, pls don’t censor me! (otherwise, nobody will understand).

Any of the filth money from Arabian Nights Donation used for this kidnapping?
I am not apologetic like that Curtsy Obama.

Your forget to mention the fire you guy trump.He said MOI his favourite PM.Maybe Arabs but i dont think so.Local funding i think.

Many link pastor’s case to someone in gov’t, says Gerakan’s Yong
http://www.malaysiakini.com/news/374658

so wait for karma for his release?

IGP and police too busy with North Koreans?

No Ang
They are the followers of their Master Superior Religion.

rajraman.Others peoples believed and rights of freedom to practice their religion its not their priority.This well prepared kidnapping to instill fear to whoever question their rights of worship.
Its a warning to others from them to us.
Anyway i am not devil worshipper.I dont believed organized religion but i believed everyone have their rights to practiced their religion peacefully.
I don’t even believed there is devil.Devils is the peoples like the kidnappers.HUMAN.

Whether there is a religion or not, Karma is watching closely & preparing (for these cowardly criminals who have a religion or not).
For any bad deed, there surely will be a price to pay.
No hope of praying many times (a day) for cleansing of such sins.

you mean karma will come after lost of innocent lives like children and babes? what karma babes and children deseve?

Everyone has to die one day. But before that or after that, the inescapable Law of Karma will choose to seek out those (with bad deeds).

Stupid comment. Even if one does, why your karma takes away babes and children who just come into this world. They are innocent.

Why don’t you ask God (or your god)?
The same for Karma Laws which are not human-made laws to spin …

Is it all that difficult? Consider these: – asking drivers thare at that time to share their in-car video footage – getting video from toll booths – finally, some usefulness for tolls. The fact that the thugs were bold enough to chase away a Kanchil should tell you something. Here is a related “conspiracy theory”. In 2001, suicidal terrorists supposedly hit the US military main HQ (called Pentagon) using an airliner. The anti-aircraft and anti-missile systems had failed. The scores of video cameras around the building had also failed simultaneously. In fact, officials went around confiscating video from the site… Read more »

Is he in Pyongyang now ?