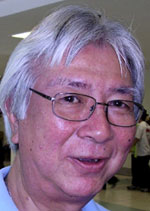 Jesuit priest Fr O C Lim, a vocal critic of the ISA, has been rushed to hospital and is believed to be undergoing heart surgery now.

Text messages have been flying around among the Catholic community, urging one another to pray for his recovery.

Lim, who has not been in the best of health, often celebrates Mass at the St Francis Xavier’s Church along Jalan Gasing in PJ.

A former lawyer, the eloquent priest usually peppers his sermons with human rights issues, which he believes is intrinsically linked to the Gospel message.

I will light a candle of good hope for this good priest to recover from his illness.

Like all us mortals, his life too is always in God’s graceful hands.

Oh dear, this shouldn’t be happeniing to somebody like O.C. Lim who sounds like a man with a good heart. May he emerge from this crisis stronger and younger! Blessings galore, good sir. Thank you for giving the Church back its social conscience.

I have great respect for the man, having attended his sermons a few times.

May the Lord bless him and grant him restoration.

Hi Anil, please do keep us from abroad updated. I got an SMS earlier on today also. Cheers and Prayers.