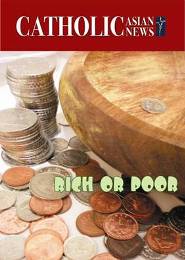 The Catholic Asian News magazine has also received a warning letter from the Home Ministry. The letter was received some time in early July.

And it’s for about the same reason as the warning letter to The Herald: for publishing articles which touch on politics.

Don’t they know that Jesus talked about a kingdom of God? That was one of the reasons he eventually got into trouble and received a death sentence. The Roman prefect Pontius Pilate asked Jesus at his trial: “Are you a king?”

The magazine is a monthly publication of the Kuala Lumpur Archdiocese of the Catholic Church in Malaysia.

Ha ha ha albar is not thinking rationally already. i think it is the pressure of P.Pauh by-election. there are so many urgent matters that concerns the people of our country . why wasting time sending warning letters.

Since when our BN government started reading Catholic Asian News ? May be they also require some divine inspiration from other religion.Sometimes I can’t understand why our government is so petty,there are so many issues facing our economy and they still have the time to read Catholic Asian News.I wonder whether they also study publication of Fa Lun Gong which is banned by People Republic Of China but very active in Malaysia.

Those who are afraid of the truth coming out… tend to become violent.
Remenber, our icon RPK has said that there is no compulsion in Islam.
So what is PAS youth so scared about, beats me!!!

Everytime this Baldie HM open his big fat mouth it stinks. What type of g—- we have running an important Home Ministry like that. This guy is arrogant, egoistic and do not know what he is supposed to do. First he was involved in the sodomy as a spin doctor and now suddenly he behaving like a religious zealot telling other religion cannot criticise or even talk about his religion. He claimed that he is open minded and see, now how he behaves. Narrow minded and a stupid idiot. The world is now laughing at our country to have run… Read more »

Botak’s Ministry is really showing its fangs and claws these days.
Its open season on anyone and any organisation which doesn’t agree with the UMNO world view.

A tame Jesus wouldn’t land up on the cross!

Public relationed as liberal ,inside is still nasty, scheming and racist. That is Barisan national for us. I wonder what trigger it this time?

Malaysians who love freedom of religion should not worry about the ruling power’s ability to restrict the truth. Just look at how God, through Moses, freed the people of Israel from the Pharoah’s grip.

He gave the Pharoah plagues after plagues and hardened his heart. This is to show who is more powerful – God or the government/earthly kings.

The discussion of religion is already freely accessible to all Malaysians on the Internet. Clamp down on the Internet and Msia will face the economic consequences.

but (putting a stop to) the raksasa UMNO is the foremost important.

Isn’t it amazing that (certain) Muslims’ who seem broad minded and civilised can suddenly become narrow minded … when it comes to religion. When will they realise that religion is between you and your maker…

Until they get to see the true light
They will not get the truth right
How else can they be really bright
When they only want their burdens light?

Soon everybody will get warning worlwide.
Only the warlords can preach Politics in Mosque.

rajraman.Want to give warning to the devil not to interfere with warlords POLITICS.

Well, what do you expect? The Government wants to silenct everyone who is not for them.

The government and Malaysians too need to grow up and learn how to accept discussions maturely and with an open mind. Only then, will we be able to go forward in this fast moving world. We need to adapt to changes.

It would seem that this “flip-flop” BN government is now changing its stand on liberal policies. There is a sense that the BN government has decided that the liberal and democratic space has not benefited them. So, there may be a growing BN backlash by resorting to stormtroopers and draconian laws to put threats and fear into Malaysians. I see dark clouds looming over the horizon. I hope common sense will prevail so that the will of the people is respected and, not trampled upon.

From Racism to Satanism 1. If anyone thinks as a Malaysian at heart you will never support any of the current political parties who speaks only about championing or protecting their own race and religious interests. Whether it comes from UMNO, PAS, MCA, MIC, PKR, Gerakan, Hindraf, PBS, DAP, PPP or whatever new name it’s called racism and whoever supports that party is called a racist. It is no different from apartheid. It dirties and poison your soul. 2. Those who are racists but speak with a fork tongue (Jeyklls), hiding it behind other causes like religion, meritocracy, education, poverty… Read more »