Some leaders (and their spouses) prefer plush exclusive private jets for travel; other leaders have a weakness for luxury cars. But Francis, the Bishop of Rome, serious about reaching out to the poor, ‘downgraded’ to a five-year-old blue Ford Focus as his choice of official car.

The car is reportedly “a European hatchback that’s no newer than 2008, with few amenities, no gilded exterior markings and even cloth seats”. That is a far cry from the Mercedes-based ‘popemobile’ that his predecessor used.

And when Francis returned from Brazil last year after a hugely successful Latin American trip, he did not choose to fly in a private jet, as some political leaders are prone to. Instead, he travelled in an Alitalia plane – in which he informally answered at length questions posed by a group of accompanying journalists. 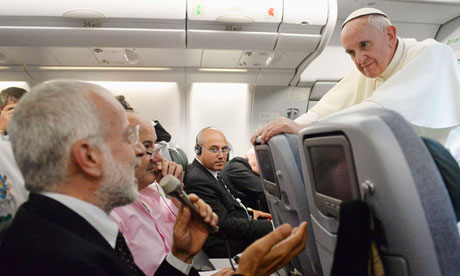 I think Francis understands the importance of a leader in his position synchronising his words (he wants the Church to be more in touch with the poor) with his lifestyle. You know, cakap mesti serupa bikin (Gandhi recognised this too.) Especially when Francis’ audience consists of billions of people struggling to cope with everyday stress from poverty, rising household debt and the soaring cost of living.

It is not just about the savings in cost that can be achieved by choosing these simpler options; it is also about the message of solidarity it sends out. Ordinary folks looking in from the outside will think, “Hey, this guy is on our side. He understands what we are going through.”

Astonishing numbers of Christians and others, including atheists, have responded to Francis’ gestures, which they sense are more than public relations gimmicks, for they have added a ring of authenticity to his words. Since his election as Bishop of Rome in March 2013, Francis has reportedly “attracted almost triple the number of visitors that gathered to watch former Pope Benedict XVI speak at Vatican City in the whole of 2012”. There’s a lesson in there, don’t you think?

They all play games for the same reason……to follow, to control, to get money Riding or sitting in whatever kind of car, pope-mobil, golden carriage it is all payed by sheeps To compare the pope with Ghandi is the same as comparing apples with pears. To upset people and give fears use religion or war if that doesnt work anymore use money and let the sheeps think there is a crises look at the so called ‘civilized’ West and you get the answer for a future without Love. Look at the natives you will get natural answers it will light… Read more »

I am not a supporter of the Pope or the institution but I must give credit where it is due. If this man who is Pope, head of one of the richest if not the richest institution in the world can use a second hand ford focus, I do not see why a chief minister needs to ride in a S-class.

No, he does not need the Merce but we Penangites are sick and tired of outsiders non stop criticism on this matter. At less than half the price of an actual Merce, I would like to say, it is a good offer. Besides, it was an Exco decision to accept the offer. If you think riding in such a car is obscene then, you should petition that all luxury cars be banned from sale in this country. We can then, be like Myanmar or Cuba.

Vatican City is so small that you can just walk, need no car, right?

Francis is also Bishop of Rome.

I think the Ford Focus is bullet-proof, right?

I have no idea.

The Pope has no enemy not, even Al Queda.

Kelty, are you trying to imply+justify+endorse that to be a CM of Penang, he must be chauffeured around in a 2cm thick bullet-proofing, sound-proofing (to hear no anilnetto.com’s critics) & bin chui car-to-car-shoulder rubbing marque? That just-2-month-old black Toyota Camry is more than good enough & safe to withstand the … insults & black cakes of [email protected] Road. And an occasional airflow wheezing from the outside is good for a refreshing & realistic assessment of street-level sentiments. Unless one aspires to eventually ride in a Rolls Royce on the way to Putrajaya with that famous ad headline (courtesy of late… Read more »

i don’t blindly support any personality; and I agree with the viewpoints from this author : http://www.themalaysianinsider.com/sideviews/article/guan-eng-in-s-class-tay-tian-yan quote : And now, the chief minister’s luxurious sedan smells genuine leather, the backseat spacious enough to have his legs fully stretched, not to mention the solid steadiness as the engine is revved up and the invincible soundproofing quality. I doubt the passengers inside the vehicle could feel the woes and afflictions of people toiling under the hot sun or rain. Ironically, this man used to brag that he would only go for economy class when taking a flight, and has hit out… Read more »

There are 2 opposing types of heart in any leadership or icon of venerability:

So when Najib tries to proclaim to the rakyat suffering the many smelly fruits of his boros mismangement, “I feel your pain”… At the same time as his pompous wife still insist on indulging of very … costly rides on Perdana 1, how to believe his “Kami mendengar” propaganda, much less his empty 11 steps to cut costs? His GE13 promise to cut intra-city tolls on top of his 2011 promise… “Janji ditepati”? Hah! I cannot figure out just who is Najib’s worst enemy in Seri Perdana – he himself and his wonderful slogans, or Rosmah and her delusions of… Read more »