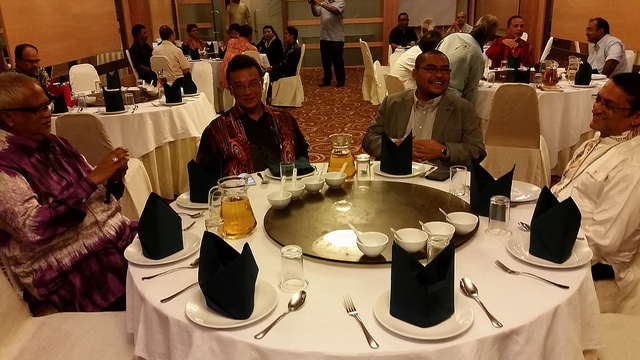 Christians and Muslims met up again in equal numbers, this time at a hotel in Alor Setar, to cement ties of friendship and solidarity, notwithstanding the controversial verdict of the Federal Court which denied the Catholic Church an avenue to appeal on the use of the word Allah in the Herald.

The heart-warming gathering of 40 participants had been scheduled without the Federal Court decision in mind – nor did the organisers anticipate a right wing group’s threat of beheadings (pancung) to those who insult Islam – but it so happened, providentially perhaps, that all these coincided on the same day.

A previous meeting in Penang between Penang Bishop Sebastian Francis and Pas spiritual leader Nik Aziz coincided with a threat by an unknown group to organise a ‘bible-burning fiesta’ at the Butterworth padang earlier that day (the fiesta failed to materialise) – and Nik Aziz’s birthday.

Another dramatic dialogue last year, when participants were chased out of an Indian restaurant in Butterworth – only to return to their original venue, an Anglican church, where they successfully carried on their scheduled dialogue – coincided with the 50th anniversary of the formation of Malaysia.

Both sides were mindful of the court decision earlier that day though they didn’t dwell on it. Instead they preferred to focus on the ties of friendship and trust built over the last couple of years.

Certainly, Mujahid himself has been instrumental in lighting candles instead of cursing the darkness. Apart from his efforts at inter-religious dialogue across the nation, he has played a key role in the National Unity Consultative Council, where he chairs the NUCC Working Committee on Law and Policy.

The Committee has come up with three draft Bills, which Mujahid is optimistic about. For the first time, these draft Bills have been widely circulated among the public to provide their feeback:

– A draft National Harmony and Reconciliation Commission, which envisages the setting up of a commission to tackle these issues.

Bishop Sebastian’s fellow bishop, Paul Tan, had referred to Mujahid as a modern-day St Francis of Assisi, after the Parit Buntar MP visited Sr Juliana Lim who was lying in a coma in hospital in Seremban following a robbery attack, which resulted in swirling suspicions of something more sinister.

Mujahid himself paid tribute to Sebastian for providing unfailing support in opening the doors of churches in the northern region ever since the Pas National Unity bureau chief led a Pas delegation in 2012 to visit the Cathedral of the Holy Spirit in Penang to congratulate the then newly installed Penang bishop.

For his part, Sebastian rejoiced in the ties of friendship already built and fondly recalled his meeting with Nik Aziz, when the latter had offered him words of advice and concern like a fatherly figure.

The bishop said the country needed more visionary leaders who had a strong spiritual foundation.

He noted with gratitude that it was a previous sultan of Kedah who had provided a safe haven for a Christian community, led by two French priests, fleeing from persecution in southern Siam in 1781.

The priests and some of this community later settled in George Town, Penang five years later, becoming pioneers of the Christian community in Penang. One of the two priests, Arnaud-Antoine Garnault, went on to become bishop of the northern region – Sebastian’s forerunner.

“I now come to express my thanks to Kedah for the refuge they provided this Christian community in their time of need,” said Sebastian. 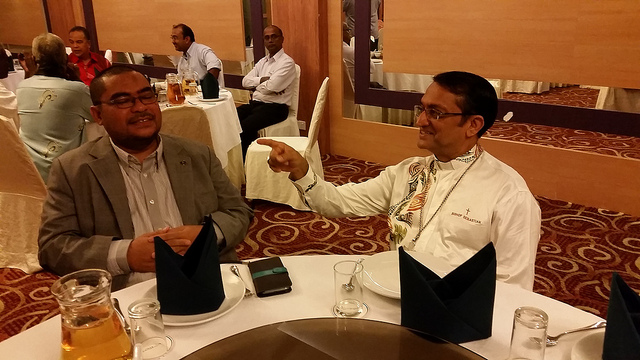 The bishop urged those present to participate in a “jihad” (spiritual struggle) against corruption, injustice and evil all around us.

Emcee Abdul Rahman Kasim expressed incredulity at the Federal Court decision and empathy for the Christian community. At the dinner, he read out a pantun (poem) on unity and peace, a few of the verses flowing as follows. 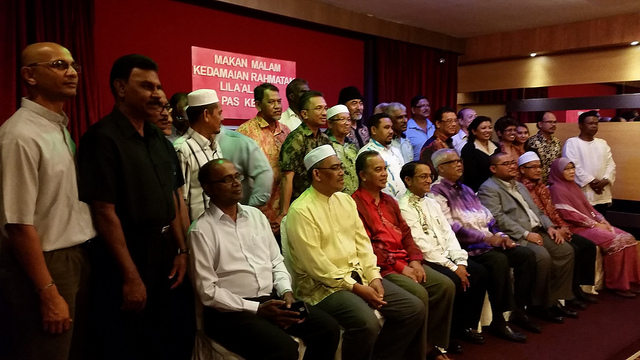 The event was organised jointly by Kedah Pas, with the help of Penang Pas, and the St Michael’s Church in Alor Setar. But not everyone in Pas, especially the conservatives, are pleased with the bridge-builders, who have been accused of fostering “liberalism” and “parallelism”.

Later, over drinks at the corridor of a nearby nasi kandar restaurant, I told the persistent Rahman that his team’s effort in organising this event and in ensuring that everyone turned up had been amazing. For instance, Rahman and his daughter had personally wrapped up the over 100 souvenirs (see a few of them below) for the dinner. Another member at the table had personally sponsored the cake which Nik Aziz had presented Sebastian during their ‘summit’ meeting. 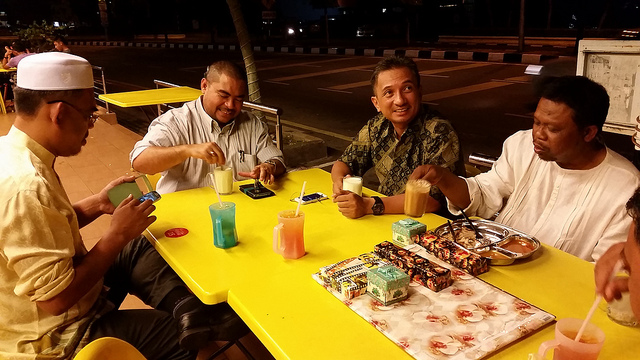 To which the burly Rahman smiled genially and said that he felt it was his “obligation” to bring Muslims and Christians together in the quest to foster greater unity – an obligation which he had no doubt embraced as his personal mission in life.

The word ‘Allah’ was in the older Bible, some 40 years ago or so. But now, Western Christians have taken them out and replace with ‘God’;thus showing that Allah in the Quran is supposedly not the same god of the Bible.

Prior, the Jews have taken out the word Allah from the Torah for fear of mispronunciation and thus, replace it with the tetragrammaton ‘YHWH’ . Later, Western Christians change the word ‘YHWH’ to ‘Lord’

Becoz this the exact same way Singapore … did to Malays in Singapore, after a while no more call for solat Frm masjid2 no more such allocation. Malays in Singapore took that bait, Malays in Penang don’t want that same bait. Stop humiliating Malays by giving budget to masjid in hope Malays support Dap. Stop it.

The Forbidden Word for God Sat, 28 Jun 14 (BBC World Service – Heart & Soul program) The word Allah is an Arabic word for God widely used by both Muslims and Christians in the Middle East and in parts of south-east Asia. But recently, a court in Malaysia banned Christians from using the term. The dispute over who should be allowed to use the word Allah has led to attacks on churches and some Muslim prayer halls in the multi-faith country. Now, Christians are fighting for the right to use it. Church leaders say that Malay language bibles have… Read more »

Thanks for highlighting the podcast. The world is certainly laughing at Bolehland.

I must thank readers who provide value added materials as above. Too much thrash talking by certain individuals who are miserable because of their own action.

The well-known American Muslim theologian Reza Aslan says Christians using the word Allah do not pose a threat to Islam. “This notion that Malaysian Muslims need to be protected by the court because you can’t think for yourself, you can’t make decisions on your own. We are laughing at you, A Taliban put a bomb in the Quran and took it to a mosque in Pakistan, where Muslims were slaughtered on one of the holiest days in the Muslim calendar. You want to talk about threats to Islam? That’s a threat to Islam,” he said, in dismissing the argument that… Read more »

I urge readers to read the book ‘Engaging Christianity – a travelogue of peace’ by the moderate Muslim and MP of Parit Buntar, Mujahid Yusof Rawa. The book is affordable at RM25 (Gentamedia.com).

European & American Muslim are different from Muslim from the Muslim world.
In America, you can convert and then get out. You can be a Muslim and still look for prostitute or drink beer, nobody care. Here and in Muslim country its different. You know what I mean ????.

I was on holiday in Istanbul, Turkey many years back during the month of Ramadan. The Muslims there are not compelled by law to fast. In fact they are eating in broad daylight. They also consume liquor. The Turkish liquor has high alcohol content so much that one drink could put you hallucinating on magic carpet ride. There are many Muslim players currently playing for the European countries in the World Cup Finals. Can they play in the 38 degrees heat without drinking water to cool themselves during half time? Check the Algerians tonight as they play the Germans (whose… Read more »

Middle class Muslim and Malay parents should be worried about what is happening:

Increasing religious extremism and the possibility that their own children may end up as
jihadis in the Middle East civil wars. When these jihadis return to Malaysia, there would be
trouble (especially for Muslim women, Shiites and Christians).

It does not help when our PM began the radicalisation process by praising the bravery of the ISIL militants. When the different sects of Islam Sunni vs Shiites could not sort out their differences, they resort to violence and clueless suicide bombers are tempted by the promised virgins awaiting them in syurga.

I will vote for PAS any time as we can see sincerity in the many Pas’ leaders whereas i cant see any in Bn’s.

By creating extra posts – ministers without any portfolio in the pm’s department so many millions of thousands have to spend unnecessary per annum, their salaries, perks and allowances all at the expense of
tax payers’ hard earned monies. For what ? To appease the chinese and gain their votes in the next ge, wake up …

I believed PAS is very sincere in their desire. They just want hudud and is using DAP as their gateway for the Chinese vote. DAP is vehement against hudud as called by Karpal with hudud over my dead body. Now LGE DAP is becoming afraid of PAS as DAP LGE has conceded 50% of PAs aspiration with I am not against hudud but against implementation althoutgh at first DAP LGE is against hudud and also against it implementation. If PAS said Malaysia is not an Islamic country, then it is a lie. Is not hudud part of an Islamic country.… Read more »

Thanks to Najib’s glorification of the ISIS we may soon have even more young Malaysians joining the militants in Syria, Iraq and who knows where else, and all to fight and die for nothing!!! Najib should apologize to the nation and take immediate steps to denounce ISIS and its use of violence.

Mmmmmmm KayPoh
Reply to  Along

expanded PM department, 1 out of 10, to focus & cover ISIS matter ?

Despite the malay majority, Alor Setar is always Darul Aman as the people of different races can coexist pracefully, unlike big cities in Malaysia. Alor Setar is a good place to retire as the cost of living is relatively low where a bowl of noodles only costs RM2.80 in kopitiam.

looks like Alor Setar a choice home for retirees. Darul Aman means peace no war.
Development just nice. Darul Aman Mall right in the city to be ready soon. No need fancy brand names as long as essentials are there at affordable prices !

Najib has expanded his cabinet, but no minister is tasked with inter-faith matters like what this seminar has done?

With 10 ministers in PM office, Najib has delegated so much that he could spend more time traveling overseas?

Big story? No one noticed the many empty seats?

All 40 expected participants turned up. People were walking around and mingling and greeting one another and taking photographs – that’s why the empty seats.