As the conservatives in Pas come under fire for their comments on local elections and other hot-button issues, Mujahid Yusof Rawa continued his efforts to project a more inclusive face to the party. This afternoon he cemented ties with the Christian community in the northern region. 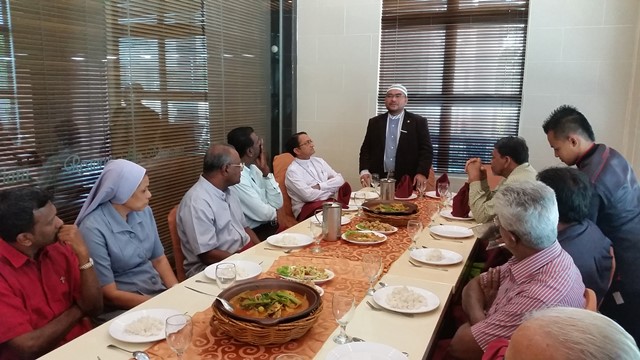 Bishop Sebastian expressed concern over the health of Pas spiritual leader Nik Aziz Nik Mat, whom he had met over Thaipusam in 2013. Touching on the recent floods in Kelantan, Sebastian said the church stood in solidarity with those suffering there and outlined the church’s relief efforts. What made these floods different from earlier ones was the sheer amount of mud that swamped the land, he noted, attributing the unusual phenomenon to the alarming deforestation that has stripped forests of their cover. Both Christianity and Islam emphasise the importance of stewardship over the environment, he stressed.

Fresh from a recent trip to Turkey, Mujahid said he was delighted to continue to cement ties with the Christian community. He drew a parallel to the work of St Francis of Assisi, the greatest saint in Christendom since the apostles, who held a landmark dialogue in 1219 with the sultan of Egypt, al-Kamil, nephew of the Muslim warrior Saladin.

That ground-breaking dialogue between monk and sultan held on the banks of the Nile in the thick of the Fifth Crusade was remarkable. Francis was dead against the war – he had been traumatised by his experience as a soldier and decided to turn his back on his inheritance as the son of a wealthy cloth merchant to embrace a life of poverty. And so he set about to meet the sultan, a Sunni Muslim statesman who was magnanimous enough to grant this audacious monk an audience. Francis had hoped to bring about an end to the warfare by converting the sultan to Christianity. In the event, both men held a frank dialogue which left a deep impression on both parties.

After lunch, I asked Mujahid, seen as a future Pas president in the medium term, if he thought Pas members were ready for a more inclusive party. “They should be,” he said without hesitation, a broad smile breaking out on his face. “I think they are waiting to see a more inclusive side to the party.”

But first, Mujahid faces a tough battle to retain his central committee seat in Pas’ party elections in June. Yet so convinced is this modern-day ‘Francis’ (as Johor Malacca Bishop Paul Tan refers to him) of the importance of “building a (more inclusive) civilisation” through dialogue that he is willing to stake his political future on his belief that the party should be more inclusive and accepting of differences and diversity.

Whatever his electoral calculations, Mujahid has laid down the gauntlet and is sticking to his belief in the importance of strengthening ties with those of other faiths. Watch this man.

Will Malaysia really end up ‘in trouble’ based on the fact that there are 50,000 Malaysians who are supporters of the Islamic State of Iraq and the Levant (ISIL) group?

According to Transport Minister Datuk Seri Liow Tiong Lai, this figure based on police intelligence estimates will threaten Malaysia if even only one percent of these sympathisers turn radical and attack any part of Malaysia.

Beware of the Jekyl & Hyde.

Kelantan’s Deputy Menteri Besar, Mohd Amar Nik Abdullah, has gone on record as saying that the PAS government would table a private member’s bill at Parliament’s March sitting. The bill is to pave the way for the enforcement of hudud in the state. –

Datuk Mujahid Yusof Rawa, who heads the National Unity Consultative Council (NUCC) working committee on law and policy, said he hoped PM Najib could study the draft of the National Harmony Act, which was originally intended to replace the Sedition Act 1948, despite Putrajaya’s decision to retain the controversial law.

I have seen enough, I have heard enough. Its only walking the talk that I and the people want.

Today, an establisment figure spouted his spin that an elected council would be “independent” and therefore levy higher charges on the people. The subtle threat is that such a council will not get state financing. Just as some “independent” states are now complaining of being underpaid.

Social engineering, the influx of foreigners and decades of the Arabisation process has made it clear that mainstream Malay culture and traditions is in fact a replica of Saudi culture or at least that is the eventual goal. “Malay” tradition and cultural norms have over the years been replaced with Wahhabi imperatives that seek to extinguish the various cultural influences that made Malay culture and traditions such a melting pot of Southeast Asian influences.

In Pakatan, 2 parties are moving forward, one is moving backward, it is so obvious that the party that is moving forward will continue to thrive. PAS has made several grave mistakes just after GE13, PKR and DAP still accepted PAS as their partner, but enough is enough, PAS has become a thorn in Pakatan’s struggle from within, it is time to ditch this useless party and move on.

Hadi is edging closer to Umno.
PAS Kelantan is indebted to Umno for the assistance in the flood relief. Hadi is now using Umno’s script of invoking May 13 tragedy to oppose the proposal for local election.

Is the mind so sieged to easily believe that anything new to existing political framework could lead to another May 13 incident?

The problem with the PAS “conservatives” is that they mix Islam with Malay ultranationalism (“Ketuanan Melayu”). This mixture is repellent. If you want to convert more non-Muslims to Islam, then get rid of the Malay ultranationalism. There are plenty of Chinese Muslims in China, you know. These are the millins of Hui who are Chinese through and through but are also Muslims. There is no animosity from non-Muslim Han Chinese toward the Muslim Hui Chinese in Mainland China. If you want to be Malay ultranationalist, then join Mahathir’s UMNO Baru ! This will allow the PAS progressives to modernise the… Read more »

I understand that the Muslims in China understand Arabic thus enabling them to read and interpret the religious Holy Scripts on their own. This definite put them on a better footing and less vulnerable to any extremist interpretations or teachings of others.

Years of BTN and Jakim doctrines as well as Ketuanan ideology have actually deepened the sieged mentality of the malay community as they do not question things and merrily accept them for fear of religious backlash and peer pressure.