1334: “Okay, nak balik, tamatlah kisah cinta di pagi Ahad,” says the Muslim who has turned up to express solidarity. Once again, the tables have been turned, and the Muslims who have stepped forward to express solidarity with the Christians have given us real hope of an alternative, more inclusive vision for the future, in which the children of the light will overcome those of darkness.

1333: The priest says it is a historic day and thanks everyone who has come including the police. The large turnout this morning has made it almost like the attendance at Christmas. He mentions something about “kebebasan menyembah tuhan”, which sounds more poetic than freedom to worship, notes an observer at the scene. “You know, Malay is such a beautiful language, fit for any faith,” adds the observer.

1322: One of the Muslims still at the church says perhaps a more appropriate term to use is ‘inclusive’ (instead of ‘progressive’) Muslims and Christians – as opposed to those who are more exclusive in their orientation.

1240: Journalists have come back to check out the Malay-language service in church.

1151: One of the Muslim solidarity group members at the church phoned to report: “There are services in different languages throughout the morning. The Tamil service is about to end. It’s getting boring and hot out here, but I might stick around a bit.”

1130: A group of about 40 progressive Muslims and others turned up to defend the church and later handed over flowers to parish priest Rev Michael Chua as parishioners applauded. 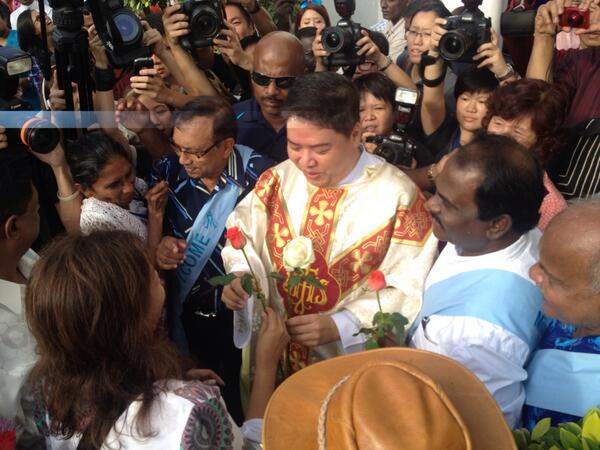 The priest of Our Lady of Lourdes thanked all parishioners, friends from other faiths and the YBs who came to show their support and love.

At the Our Lady of Lourdes Church in Klang to show what 'Islam is a religion of peace' really means..

Meanwhile, a small protest attended by some 50 people was held at the Stadium Kota Raja Sultan Sulaiman in Klang not far away.

Tried to contact Klang MP Charles Santiago just before 8.30am. He sent a text message back saying he was attending a service at the Our Lady of Lourdes Catholic Church in Klang.

He said there were no protesters around but police were outside to monitor the situation.

George Orwell must be thinking in afterlife that Animal Farm does exist in Bolehland where some are more equal than others!

At the end of the day, “God Is One” and I’m really glad matured thinking won the order of the day!

Yes, God is One.
Just like you and your cousin have the same grandfather although both of you have different surnames.
That’s the way to see it.
Have some family spirit!

In all religions, violence and bloodshed are condemned. Peace and harmony are among the most cherished of God’s goal for mankind. Abhorance towards violence is a fundamental aspect of the religious conception of man who is conceived as a peaceful, harmonious personality. The growth of a peaceful, harmonious personality presupposes the elimination of contradictions within the individual. Only then would the right conditions exist for the development of a totally integrated human being, the sort of human being that every religion treasures which can pave the way towards the creation of a more peaceful and harmonious world. To achieve this,… Read more »

God will shake His Head seeing our quarrelsome small minds over His Mighty Names.
But He knows our imperfect hearts & will deal with us accordingly.
Only men will interpret what is holy, blasphemous or unutterable to suit their fleeting earthly agenda.
Nothing burn the hearts & minds except religions or fanaticism or cultism or politics.
Only one word can bring peace, progress, sanity & mutual coexistence: LOVE

While we are still raging in our hearts, take some time to listen to John Lennon’s Imagine:

I attended all 3 mass. english, tamil, malay. it was fun being there. the ultra muslims cowed.

Thanks for being there, Sarajun.

Actually, they have not lost yet. Why do you think UMNO decide to tell their people to back off? From the start, its about greedy for cheap political capital. The truth is something sensational triggered by them and beaten back would have been disastrous for UMNO. Malays Muslim have no appetite for real prolong physical violence. Whatever political capital UMNO can get from this issue would quickly go into negative if there was violence blamed on them.

Salute to those Muslims who showed their pity for those Catholics. But still the number is small considering the over 60% of the population are Muslims. But as the leaders are Muslims and they are the ones stirring the not so exposed, what can one expect!! But what with the fellow who the UMNO Government sponsered using taxpayers’ money to outer space??? Was he selected based on his intelligence? Or like everything else, being connected is the important thing??? I would have thought someone so ‘intelligent’ to be sent to the outer space has some grey mater to know what… Read more »

Only 50 people showed up at a different location to basically refuse to admit they were wrong. It goes to show the ENTIRE PROBLEM WAS MADE UP BY UMNO(?).. Only an instruction from (a) minister kept everyone away from the Church and only 50 people showed up to be stubborn PROVING the entire thing NEVER SHOULD HAVE STARTED – ENTIRELY MADE UP BECAUSE UMNO WANTED IT(?) Its a COMPLETE CONDENMATION OF NAJIB (and Muhiyiddin and pretty much most of UMNO leaders) – proves he is no leader at all, merely an ordinary selfish jerk. He may have little religious credential… Read more »

@bigjoe99 this is not the end of the `Allah’ debacle by and large. Najib is a wayward and recalcitrant UMNO who has given many versions of responses once the domain of DSAI! Right now Rosippuff is hunckered up with him in NajibRosmah2 to prepare and coach him what to do and say as she must remain the mistress of Seri Perdana! ONly TURUN can put an end to his wanton destruction of the Rakyats’ peace and stability. We want nothing less than them spend some years of restitution and reimbursements for their … squander! Meantime, JAIS, the Selangor Palace and… Read more »

And no winner in any religions “interactions” like this one. So, politicians and supporters don’t ask for one. Express your dissatisfaction during election time is the best option. Rogue coalition needs to be defeated !!!

Rich Daddy, Prior to 308 our country were peaceful with no issues of race or religion. After 308 victory has gone overboard into the opposition brains to further their main objective of bringing down the govt through rally and and any means bringing up such issue when it was a non issue then. Is this another weapon of mass distraction by the opposition especially the DAP. Read this

Please lah brother, PM already did something to ease the tension. You think sudden U-turn by UMNO Selangor come auto-magic kah ??? He too have to “jaga” votes and someone faces.

The “Muslim Solidarity” folks were at the Padang Sultan Sulaiman while a group from Sisters in Islam and some other Muslims attended Sunday service in Our Lady of Lourdes Church in a show of solidarity.

Now which group is putting Islam in a bad light?

Which group reflects a better future for Malaysia?

Which group is Najib, the voiceless PM, going to support if (when?) his vocal chords lose their paralysis?

Agree bigjoe99 – we cannot be careless! PR does not need to do anything as the mess is legally contained & is stinking in their home-compound.

This is the typical UMNO (moo moo) mentality! Shame on (them), thats because NONE of their leaders know the meaning of the surahs they have been parroting ALL their lives! Or chances are they have NOT met the Verse that means,` Make War on those Kafirs IF/WHEN they make war on you!’ When it comes to the Rakyat protesting unfair price hikes like the recent TURUN, the PDRM will be crawling all over the places with (questionable) evidence and … allegations… Is Pakatan already fast losing its scramble for Putrajaya? Is Father Lawrence, unwitting, pawn of … UMNO’s instrument to… Read more »

…But we must never forget that the PM allowed such hate to fester and foment and allowing/endorsing the escalation of hate-mongering. We must remember this during the run up to the next GE14, as we do not and should not allow such people to continue taking us down to the abyss. Do not forget …!

All religions are for peace.
It is the people who create trouble in the name of defending their faith.
Peace to all.

Why always blaming UMNO? There are Malay Muslims and other Muslims who don’t belong to UMNO who feel aggrieved by the Catholic Church’s obduracy and obstinacy. In any case, I don’t know how many of you Christians ever pray to Allah in your daily life. Who do you really pray to when you are in need of divine help? Do you say “Allah, please help me”?

Be true to yoursleves and not jump into anything and then blame UMNO. Think of the other Muslims (except PAS and PKR), talk to them and perhaps you’ll understand.

It does not matter how many or which Muslims feels “sensitive”. UMNO is in power and responsible simply for the truth. Bucks stop there. Period.

2 out of every 3 catholics in Malaysia are Malay Speaking Bumiputeras, if you’ve met them and be-friended them you’d know that they do in fact refer to God as Allah. The problem is that you’ve only seen the 1 out of 3 catholics that are from peninsular, and not Malay speaking.

That may be the true but its NOT EVEN THE ISSUE.. Fact of the matter is “sensitive”. especially alone, is NOT a basis for such a decision. What happens is they decide that its “sensitive” they are not obcenely rich like Rosmah with (those) jets or cannot afford to have four wives as allowed in the Quran?

They are not going to show up. They will show up somewhere else just to refuse to admit they were wrong. This thing is fundamentally a political mess made by UMNO – Najib already admitted as much when he said he did not care for legal arguments because he knows they were wrong. Even if you have selfish crazies like Hasan Ali, their reach is limited and Najib has enough to rein most of them in. He had from the start but was just too interested in getting the marginal votes of the crazies to stop them. The problem is… Read more »

Politics & religion are 2 elements that can incinerate humanity if not practiced carefully or separately.
One is like petroleum (a fire starter), the other fire wood (burning slowly & never extinguish).
Ideally, the two should never mix to deny any chance of conflicts.