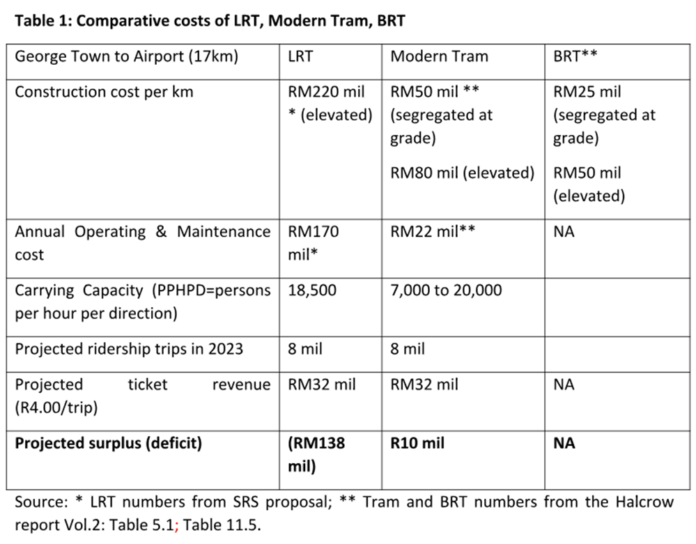 This is the fifth article in a series to explain why the Penang state government should get an independent review of the Penang transport masterplan. It was written by Dr Ahmad Hilmy, an associate professor at USM (Technology cluster — transport system) and Dr Lim Mah Hui, a former professor, international banker and Penang Island city councillor.

Much has been said about the Penang state government prioritising the construction of a light rail transit (LRT) system from George Town to the Penang International Airport.

This is part of several other mega infrastructure projects under an altered version of the Penang transport masterplan, which ballooned from RM27bn under Halcrow to RM46bn under SRS Consortium.

What has not been aptly explained is why the state has chosen the LRT, which is not only much more expensive to build but also costlier to operate and maintain, compared to alternatives such as a tram or a bus rapid transit system.

Curiously enough, the state is insistent on pursuing the LRT project even though the tram and bus rapid transit were recommended in the original Penang transport masterplan designed after a meticulous study by UK-based engineering consultant Halcrow.

Despite the Halcrow transport masterplan having been officially adopted by the state in March 2013, it was radically redone by a Gamuda-led corporate entity named SRS Consortium, which was awarded the contract to implement the plan.

But is the projected LRT ridership by SRS realistic? Has the state done a financial analysis on the expected annual deficit of operating the LRT, as opposed to a bus rapid transit or tram system? Is it putting Penang at financial risk?

Why was no comparative study done on the financial viability of alternative public transport systems before a choice was made?

Table 1 shows that it is three times more expensive to construct an LRT (RM220m/km) compared to a tram (RM80m/km) and 4.5 times costlier compared to an elevated bus rapid tranist system (RM50m/km). 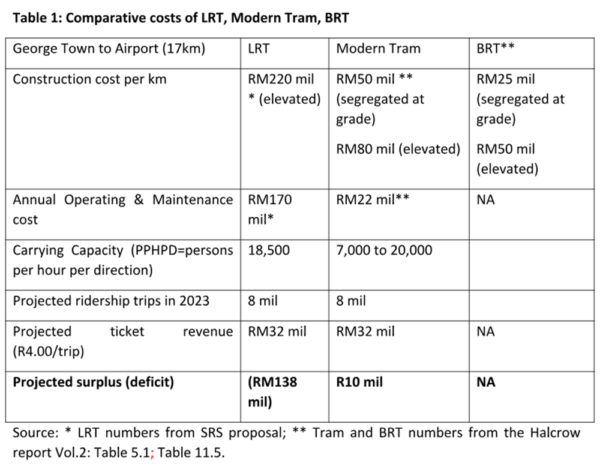 Is SRS’ projected ridership for the LRT at 42m per year (116,000 per day) realistic? Or is it inflated? A recent article similarly questioned the 42m ridership figure.

The writer said: “How is it possible for the Penang LRT to have an annual passenger journey per person much higher than most MRT lines in London, Singapore and Kuala Lumpur when it does not have an interchange station with other rail links during its first year of operations?”

As a comparison, the daily total ridership for Rapid Penang buses in the whole state is still less than 100,000 per day after more than 10 years of operation.

Using the experience of Kuala Lumpur’s three LRT lines as a guide, the actual ridership for the three lines ranges from 3% to 20% of projected ridership, with an average of 18%.

Hence, we believe that a projection of eight million trips (19% of the original projection, ie 21,920 trips per day) is more realistic than the 42m per year claimed by SRS. Based on the eight million trips costing an average of RM4 per trip, the projected deficit for operating the LRT is RM138m per year. In contrast, the projected surplus for the tram is RM10m a year. See Table 1.

While this is a back-of-an-envelope estimate, the state government must commission an independent comparative financial analysis of the various modes of public transport systems, which it has not done, before making such major decisions.

The KL-Klang valley LRT experience is further instructive. Within the first two years of its operation, the projects racked up massive losses due to inflated financial projections. The federal government had to pump in RM5bn or more to bail out the operators. It would be irresponsible for the Penang state government to plunge the state into financial distress.

In conclusion, we call on the state to exercise fiscal prudence and conduct proper studies and comparisons with other cheaper and more sustainable public transport systems before leading Penang down a treacherous path.

1. To make valid comparison across the different systems, only the construction costs, inclusive of the electrical and operating systems, are used. These numbers do not include land acquisition costs that vary significantly.

2. Halcrow recommended three tram lines for the island, each with almost equal distance, with annual operation and maintenance costs of RM67m. We therefore used RM22m as the cost for one line (see Table 11.5, Halcrow Report Vol 2).

PiL could be scrapped like PLKN and BTN with public pressure?

https://mothership.sg/2017/11/ong-teng-cheong-pushed-for-building-mrt-in-spore-despite-it-being-a-controversial-idea/ I read the above article and coming back to Anil’s post, I wondered if there are similarities between our situation with Singapore’s? The article didn’t elaborate on the details but it appears that there was a debate between MRT vs Bus solutions, and in the end, MRT was chosen. How did they reach that conclusion? “A team of planners, with the help of the United Nations Development Programme, peered very hard into the future and predicted that a transportation system based on buses alone would fail by 1992.” Now back to PG, either tram or BRT, though it’s cheaper… Read more »

Modern trams (which may be considered a subcategory of light rail), at street level, segregated or elevated, can carry about the same number of passengers as an elevated LRT. A BRT route can be upgraded to a modern tram line. Singapore’s population is 5.6m, and that can justify an MRT. Penang Island’s population is 800,000 – and barely rising, so that has to be borne in mind in calculating projected ridership levels. All this has been considered by the Halcrow consultants, who put forward a system of BRT and trams in their transport masterplan, which was then adopted by the… Read more »

Yes, adopting a feasible transport system should be based on population, not on misleading future population projection as done for PTMP.
Why buy & drive a Merc S300Lansi when one is working as a delivery boy!!!

Lky orso appoint Yankee consultant. Yankee don’t use buses. Brt may be chip chip but can it attract passengers? Who wants to take bus or tram when it is jammed by other vehicles at road junctions or when shared road? Since brt roads are separated, who is the sheila dares to take bus. The stops at separated roads can be isolated. Try the brt in Brisbane. But lrt though cost more, it is punctual and this is the attraction. Lrt is modern and friendly transport and ah bing and ah lan likely take them. They can go dating. Bus and… Read more »

Anil, I think we should conservatively assume that Singapore justified MRT based on 1967’s population of 1.978m and the projected growth (not mentioned) then. Based on your article, http://anilnetto.com/environmentclimate-change/sustainable-development-2/penang-forecasting-higher-population-2030-statistics-departments-projection/ Your reported that Department of Statistics forecasts 1.98m in 2030 from 1.75m in 2017. That’s an increase of 13%. With the same number of years for Singapore, if started from 1967, would bring us to 2.414m by 1980 (from Google’s graph presentation of World Bank data). That’s a whopping increase of 43.6%. Note: Article didn’t share exactly which year(s) was used for justification/growth projection, so I just assume we start from… Read more »

I don’t know why the Department of Statistics revised their population assumptions upwards for Penang. I would be interested to know what changed from the earlier estimate.

The other point is that with a BRT, it is much easier to adapt to new routes and upgrade to modern trams, whereas with the elevated LRT they have in mind, it would require major investment to connect or change to new elevated routes in the future. Not so easy.

I see in the alternative plan, the suggestion is for tram in island and BRT for mainland.

I can understand comparison includes BRT and tram because maybe both was mentioned in Halcrow study (I am not sure). But why not keep the messag clear and compare LRT against tram only since that’s what is being proposed as alternative.

Tram could be more expensive as Sydney find out as they dig the roads to laid the tracks. As hal crow study the existing utilities. Malaysian style. Everything is undocumented. This Spain contractor is going to claim for utilities relocation and eot as an excuse for delay.

Tram tracks at ground level may not be practical as it is very common to see road digging (cables, water pipes, sewerage etc) happening in Malaysia.

actually if you really feel that LRT is the way to go, then you should support a proper comparative cost-benefit analysis. If the data proves LRT is the best, you don’t need to
argue with points like ‘could be more expensive’.

Come and together we call for our state gov to do that analysis. No need to debate here.

Yes, and it should be based on realistic projected ridership figures.

When trams go elevated, then they are inefficient LRT. Why Pg forum can’t go to hong land tuen mun and see their “trams” which MRT calls them Light Rail. Usually they comes in one vehicle and two during weekends. But actual LRT has more than 2 carriages; up to 8 carriages

If you ever think of extracting underground water (in a future scenario of water scarcity) or tunnelling (to accommodate underground property or road development) in George Town, which once & is still sitting on swampy land, you’d better think thrice.
Read the below article about sinking Jakarta which has somewhat similar geographic & land makeup to George Town.

Ah pek, this pg not Batavia or krung thep. You find Batavia with high hills?

The real reason for LRT is because its faster and bigger. Why because ultimately Penang CANNOT HEAVILY TAX CAR OWNERSHIP. If Penang tax car ownership, all that will happen is people buy car outside the state and bring it in. Its a nightmare to implement in a country like Malaysia. Penag can only tax car use which not only not very effective it has very big problem that too much tax on auto use will hurt business that need transport. BRT, Trams CANNOT WORK if CAR OWNERSHIP CANNOT BE HEAVILY TAX.

How about implementing ERP? Electronic Road Pricing System used in managing road congestion. Based on a pay-as-you-use principle, motorists are charged when they use priced roads during peak hours.

Can leverage such system from Singapore.

Very costly to implement. How to charge or make cars or vehicles to pay? Even Hong Land difficult to implement

LRT option requires minimal land usage so despite higher cost may be the way to go & may I suggest make it a private initiative for efficiency.

The Penang Floral Festival 2018 will showcase various flower species and landscaping designs which include various species and hybrids of orchids. In addition to that, there will be workshops, various contests, exhibitions and classes on floral related topics along with the sales of different varieties of plants and gardening equipment.

The comparative costs of LRT, Tram & BRT is so glaring, it amazes us how our previous accountant qualified CM cannot see the wood for the forest!
Is it (sea tunnel) for his own political legacy like that costly Petronas Twin Tower is for Mahathir?
I can’t help but still be reminded of that Merc S300Lansi.

Ah pek, you more for transport get you on time. There is nothing to delay the lrt. If ah peks want to cross the road, they have to cross under or over the lrt. Lrts can build above existing infra but BA’s transit requires additional land. Even if elevated, road for brt will be wider.
Don’t just kau beh kau bu. Talk facts and not winch.

Lrt gets a person on time. No traffic jam. Brt buses have to stop at every road junctions. If elevated brt, elevated road has to be wider. Made worse, people will not take elevated brt as the bus stops are very isolated. Want to comment, please spend more time with the system. Lky commission american consultant for singland transport. The consultant proposed all buses like the brt. Lky throw them away and there cone the MRT.