Another landslide at the crack of dawn, this time near the Bolton Surin project along Solok Tanjung Bungah, not far from an earlier landslide in September in front of Straits Regency along Persiaran Tanjung Bungah 3. 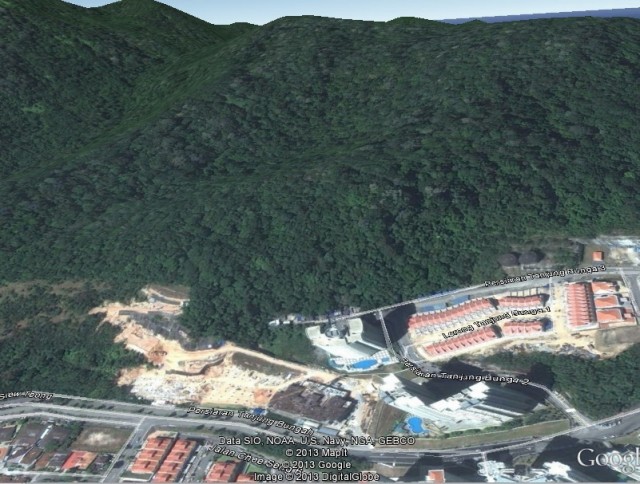 Mind you, the image above is an old one but even so, it gives you an idea of how scarred the hill-slopes have become. 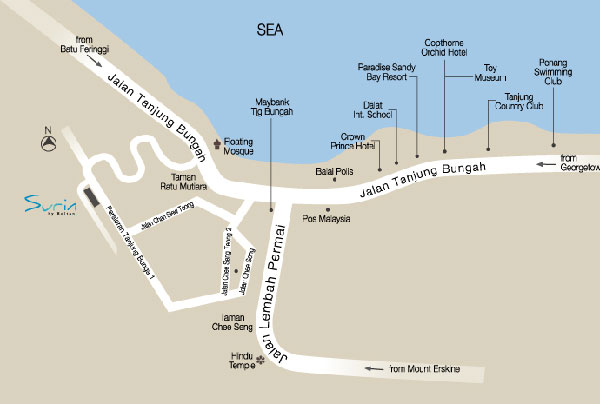 A nearby resident reported:

This morning at about 3.30am, Wednesday, 6 November 2013, we were woken up by a very loud sound which we suspect to be a landslide at Solok Tanjung Bungah. Our view is obstructed from where we are by trees that have been strategically been ‘left behind’ to block our view of the cutting of the slopes!

The huge boulders and earth that cam down some weeks back have been cleared. Took them a while to do it.

Since then, there has been a fair bit of activity on the hill slope, earthworks involving cutting of the slopes and attempting to dislodge a huge boulder amongst other things. Due to the earlier two landslides, the slopes have been cut further in and some trees have been strategically preserved to block my view from where I stay.

I guess if one were to approach council or the developers, they will say that what is being done now is to stabilise the slope. My worry is that judging by what has been happening, it is getting worse and the slope has never been more unstable than it is at the present moment….

Only this time due to the slope having been cut back after the earlier landslides, the debris did not spill on to the road as much as in the previous incidents. But it is obvious that there has been a landslide. The road has been cordoned off.

Another resident reported after visiting the site at 12.38pm:

The are a couple of excavators trying to clear the brown earth at the slopes. The road has been blocked but the landslide can be seen from the nearby roads. The residents nearby, especially from the Straits Regency apartments, had sent in written complaints to MPPP about the cutting of the steep slopes. However the earth works had not stopped.

Who will take responsibility for this state of affairs?

What has happened to that committee that was supposed to monitor high-risk hill-slope development? Can we continue to ignore the cutting and the scarring of our hills?

Work in progress. Only authorize people are allow in. They are cutting the hill all this while. Ah khoon already approved them. What to do now? By the way, anything can happen at construction site. Stay away from the area.

Anil should conduct an exclusive web-interview with CM LGE on this issue.
Pasti Gempak & Meletup!

Who is the developer?

Developers are getting a free hand in Penang. No doubt about that. They suffered under Koh Tsu Khoon. Too strict and not pro development. They like the new government which has relaxed the rules for them. If Penangites want development they will have to get real and live with the cost of development. They cannot have the best of both worlds.

Maybe LGE should get these developers who are making so much money to help build drainage, parks and roads which are actually even.

Let us be real, Penang is in a mess after a few years of LGE rule. Let us not kid ourselves, just look at the state of our roads, all the potholes and patches, makes driving in Penang such a horrible experience. Coupled with floods and landslides, just what is happening? You asked for it! But really, do we have a choice? It is high time Penangnites start a new party, free of PR and BN, it has got to be free of UMNO baru definitely. Start now, and the peoples movements can catch on in 5 years. Just dump… Read more »

Yang, you need to consult a proper sifu (master) as it seems that you’ve been possessed by evil GK spirit. Why suddenly attack our lovely LGE mindlessly? Still with UBAH and ABU vision, right?

Tua Lang, if LGE (lovely or otherwise) is not doing the correct thing, then he deserves every criticism he gets. If the same happened in KL or any other BN state, you would criticize the leaders there too right. Just because you support Ubah those not mean that LGE or his subordinates are gods and cannot be critised.

“Grow up”, Tua Lang. Penangites have sharp brains, clear eyes & good conscience, not evil spirits. Speaking up against the wrongs need to be corrected by your Superbrand of proper sifu? Which one; is it from Komtar Tower? Or are you still sucking up too long to a pure & lovely & perfect deity? Ubah or No Ubah, Penang should not be deteriorating fast as it is now, a playground of recalcitrant, greedy developers creating their own havoc dreams but destructive to Penang’s fragile environment & endangering the innocent lives of Penangites, rich or poor. Ubah (Change) seems a double-edged… Read more »

I just drove past there a few mins ago, on my way back from Hillside..just to see the area. It looks bad.

This is not the first time though..

To blame the MPPP will not solve anything. The State needs to clamp down on the developer. I can’t comment much as I’m not an expert when it comes to land laws…

Maybe someone can shed some light?

Let’s stop blaming and focus on legal terms..what can be done…

Will the MPPP ever listen to you. No and why ??: Because as employees of MPPP they cannot do anything but be suservient to the PR LGE govt which is breaking every rules and regulation in their quest for development. The botak head in Bukit Gambir will soon be forgotton and development will soon start with Tunglang description of Chay Sua Kua hai bungalow that will again benefits the developers at the expense of the poor Penangite.