A fourth walk in Penang will be held on Sunday, 3 September starting at Sunrise Tower at 5.00pm. 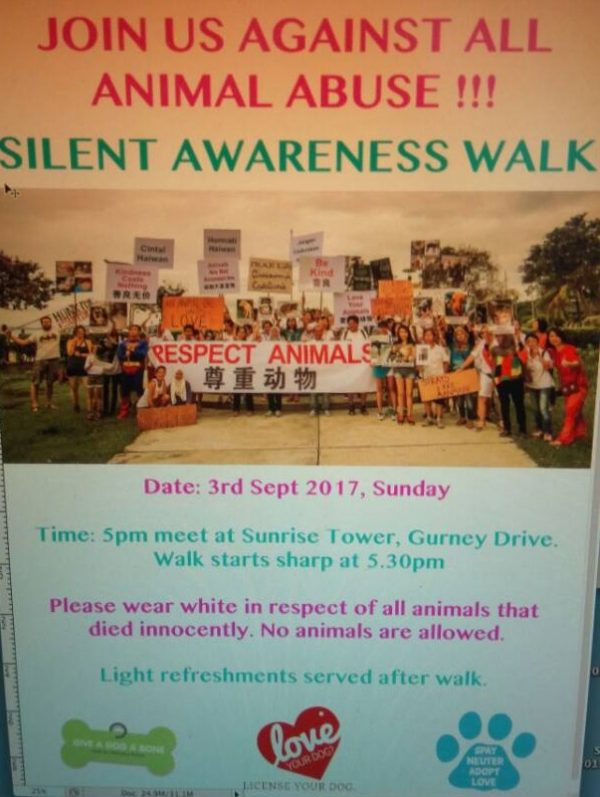 A first walk from the zoo in Johor Bharu was held on 19 August. Turnout was small, as it had never been attempted before.

A third walk was held on Sunday, 9 April at the Penang Botanic Garden at 5.30pm.

About 120 people and 80 people participated in the first and second walks in Penang on 26 March and 2 April.

This is the press release forwarded by the organisers:

Sunday, 26 March 2017, 5.30pm – Meeting point at Sunrise Tower. We will walk down Kelawei Road and up along Gurney Drive. Walk terminates at Sunrise Tower. No dogs, please. We plan to have white T-shirts in honour of all animals dead and suffering.

We will have two more walks:.

On all walks, we will have white T-shirts – and no dogs, please.

All animals born with a spine have feelings. Happiness, anger, fear, amusement, sadness. But we humans think we are the only ones with feelings; we think we have the right to treat animals any way we like because we think they don’t understand, so they don’t feel.

Luckily through research and experience, we have learned to love and understand animals more. In Malaysia, it is very popular to have cats and dogs as pets. Not to mention ‘exotic pets’.

Education and awareness of animal feelings and rights are not widespread. Most western countries are implementing similar rules and laws against mistreatment of humans and animals. Cruelty is not allowed. Respect for humans is absolutely fully understood, but so far, NOT for animals it would seem.

We have endless number of experiences in the mistreatment of animals. Some drop their dogs out of their expensive vehicles in other areas, as they no longer want to take care of them. Their pets have outgrown their ‘cuteness’. Mutilated dogs are a daily occurrence. The library of horrifying pictures seems to be endless.

Dogs are caged and chained, instead of being walked. Cats have been found in washing machines, drowned. Exotic animals are smuggled into the country and kept in aquariums even if their habitat is on land. It is an endless list of cruelty. IT MUST STOP.

We will highlight and have placards and banners to raise awareness during our walk. We will not condemn or criticise but only inform and teach. We will spread love and kindness towards animals. To educate the public about animals having rights.

We have representatives from many organisations involved and we hope for a crowd of at least 100 people to walk with us.

A very friendly and peaceful walk. Instead of microphones or chanting of slogans, we will have silence as our tool to get attention!

The organisers are also promoting TNR – trap-neuter-return, which apparently is now being practised in Ipoh and Selangor:

Trap-neuter-return (TNR) is a management technique in which community cats and dogs are humanely trapped, evaluated, spayed or neutered by a licensed veterinarian, ear-tipped to show they’ve been sterilised, vaccinated against rabies and distemper, and then returned to their original habitat.

Targeted TNR (ie maximising the number of cats/dogs sterilised at the colony or neighbourhood level) offers several benefits over the inefficient approaches that have been used for generations, such as complaint-driven impoundment, which is often followed by lethal injection.

So eat less meat brings good health to you and less sufferings to caged farming chickens and mammals destined for slaughterhouse.

If you eat meat, are you aware how the animals you eat are slaughtered?

Watch this video from PETA:
The REAL Price of Meat – One Cow’s Heartbreaking Trip to Slaughter

Norashikin Ahmad, 24, has been rescuing dogs and cats ever since 2014 when she got her first job. She houses 120 cats and 50 dogs in a purpose-built shelter next to her home in Alor Gajah, Malacca. On top of running the shelter, she works full-time, helps out with her mother’s food business and has to travel to the mosque in the next village to pray as she is not welcome at the one right outside her house.

I read somewhere and forgotten where i read this.
Before you claim you are Muslim,Hindu,Christian ,Singh etc you must be HUMAN FIRST.

rajraman. Nora is human first with pure heart and the mosque near her house …. I don’t to say it openly.
All creatures created by same god (what was claim and read about religions by me).Why the Organised Religion followers so cruel to this anilmals.

If you use your rational mind, you will find that religion is redundant, except those weaklings seeking solace in present life, or better afterlife.

Animals teach us kindness and compassion.

But certain people look into religion to seek path to better afterlife, and choose to kill as a means to reach such ‘promised land’ with ‘perks’ awaiting?

Stop cruety go less meat in your diet to stay healthier and be morally right.

Let your conscience awakes you to stop lusting after meats.

McDonald’s Corp said that it would begin curbing the use of the high value human antibiotics in its global chicken supply in 2018, as the fast-food giant joins a broad effort to battle dangerous superbugs.

McDonald’s, in a policy statement, said it is working on antibiotic plans for other meats, dairy cows and laying hens.

In other words, McDonald’s consumers have been fed with antibiotics all the while. Happy Meal?

McDonald’s meal nowadays quite pricey, with or without antibiotics.

Go and compare your children/grandchildren with you at same age.

Life is very vivid to animals. In many cases they know who they are. They know who their friends are and who their rivals are. They have ambitions for higher status. They compete. Their lives follow the arc of a career, like ours do. We both try to stay alive, get food and shelter, and raise some young for the next generation. Animals are no different from us in that regard and I think that their presence here on Earth is tremendously enriching.

CNN: KFC USA promised that by the end of 2018 the company will only serve chicken that was raised without potentially dangerous antibiotics, joining a growing list of fast food companies that have made food supply changes aimed at drawing in health conscious eaters.

Does that mean that until 2018, the KFC chicken is still laden with antibiotics?

One chick has flu mampus and there goes the chicken farm. Man today are living like chooks ~ over populated. How to control as tun Lang says?

Most of our chickens are now bred using fast-growth female hormones.
Is this not genetic-modified poultry?
Side effects include enlarged breasts in men/boys who regularly consume such GM? chickens!
As a CSR company, KFC should take the lead to buy non-GM? poultry or adopt safer method of breeding chickens.
Chicken farms + fast food companies, take note:
Massive profiteering at shorter time is not a consumer-friendly way to do long-term business. It may backfire (like boycotts) with widespread consumer knowledge & disgusts.

Even a protected species attacked humans can put to death. Even loyal dogs attack human will face the same fate. You can ask Rspca.

The National Heart Institute (IJN) is conducting a month-long campaign on healthy eating in an effort to fight cardiovascular disease and obesity. IJN launched its eighth Nutritional Month, themed “Go E.C.O.”, at its premises on Monday. One of the campaign’s main objectives is to get people to cut down on meat and increase their intake of fruits and vegetables. Campaign chairman Foong Pui Hing said a plant-based diet could reduce chronic ailments such as coronary heart disease and cancer. “We eat about 230 million tons of animals annually. Studies have shown that high levels of meat consumption, especially red and… Read more »

Mindless do-gooders are feeding stray dogs and cats they will not take ownership of. A few even feed crows and monkeys. Perhaps they are trying to reduce their sins in their imaginary, spiritual accounting system This leads to more strays, vermin and attacks on pedestrians.

how about snakes snd crocs? no need to be kind to them and bad to them. but when people start to behave like striking cobra or attacking crocs either a human die or they die as human are also born with s defensive instinct.

Don’t hantam the CAT.
Don’t offend the Deity…
And pls don’t for Komtar’s sake, find anything wrong with Niao Kong…

Born free and animal instinct ~ self defence. Wants to win all the time? Even cats craw back

I have seen irresponsible and selfish pet’s owners. The so called animal lovers themselves and the public need to be educated about how to care for their pets.

This is distraction. How about walks to stop cruelty towards humans? This applies to apartheid and exploitation, of both citizens and immigrants.

Do we need to care for many “running” dogs betraying the trust of people?

How about some dogs that appear and continuously bark relentnessly?