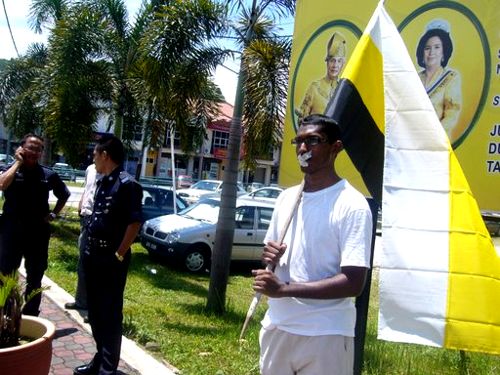 It’s a lone ranger: A silent, solo protest yesterday by an unidentified man outside the Perak state government complex – Photo courtesy of Kula’s blog, which has the full story here.

It was a day of solo protests yesterday – in Ipoh and Penang. A single-person protest cannot be deemed an ‘illegal assembly’, right?

In short notes to (Kula’s) Political Sec in a piece of paper, he wrote “People 1st, Performance Later” and also “I don’t support any party. Just as Perak Citizen, all I want is 4 my state to be at peace. Just make the people who can do something, do it now.”

And in Penang, a similar ‘lone ranger’ protest was undertaken by a Penang Pas member who spent eight hours up a tree opposite the Penang State Assembly.

“What BN did in Perak was a rape of democracy that we all cherish. It was blatant disrespect to doctrine of separation of powers,” he shouted from the tree.

“I am here atop a tree as a Malaysian and a Penangite,” he told Malaysiakini.

Is that a uniformed policemen at the background? Dude, what the … are you PRDM (no, that’s no typo) doing there? The criminals are running amok in this country (at the most top, as well as at grassroot level) and you’re not going after them. How bad must the situation become before you start doing something? The law-abiding citizen of this country deserved to feel safe from criminals and not the other way round. We’re suppose to feel safe when you’re around, not fearing if we’re going to be arrested for wearing black, lighting a candle or just simply being… Read more »

Perchance it is a psychologically reversing kickback from the poor rakyat from the overdose of hundreds and thousands of psychotically stupid 🙁 cannot, cannot, cannots imposed on their poor overloaded heads by the silly Keystone Kops and their yukky UMNO/BN compadres without one iota of necessity at all. The GLB says that the doctrine of necessity is the mother of invention so thinking laterally outside of the given Box can help one find many smart ways to skin an unruly cat. 😐 Hmm, not quite sure what that’s all about so perchance it’s time to go and cogitate calmly over… Read more »

I salute these guys. They have, definitely, b….

A little confused. If Nizar is not the legal MB as claimed so what does it mean by applying vote of no confidence to remove him as MB ?

for moment there, at a glance….i tot i SAW ZAMBRY THE …

that was a brave thing for a guy to do alone !!
no one should laugh at him ….u rock!!
don’t give a s… about what others may say!!

So…., I guess the more we protest the more people will be thrown in jail…..!!!
They better start constructing more cells……….!!!

I am with you bro…sadly, now the tape is on the lips of mother justice..

Ya, this is another option of protesting. We can have many individuals around provided they are not in a team, presummed not knowing each other should be legal.

that guy sure looks alot like my old friend navinthar..height, color, face..
too bad i’ve lost contact of that guy to confirm this info..

I think now the BN will surely cover the loophole….that is get a court order to declare that solo protest is also illegal assembly!!!

Hi everyone, I hope that the courts would rule in favour of the usurper Dr Zambry! I also hope that BN UMNO (the other BN component parties are mere ‘spectators’ and their opinions are only toothless) would not agree to dissolve the Perak State Assembly to resolve the impasse! Let the court cases drag on another year or two and inch closer and closer to the 13 GE. Let BN UMNO continue to shoot their own foot as this would continue to p… of and alienate more and more rakyat! That makes the people’s task of choosing a people’s govt.… Read more »

Yeah standing next to the picture of the absent Sultan who may be away out of the country – US or China? Yes, … you are BRAVE!

Perhaps solo protest or 3 is enough is another valid way to go. 🙂 The mass reactions can come on virtually with pics like this flooding the cyberspace.

The image of a man with his mouthed taped, and another on a tree is empowering the imagination of those who might be asleep.

Loads of precedents flood my mind now, the two Martin Luthers – one in Germany the other in USA, Rosa Parks on a bus, the strange monks in the desert whether living in a tomb or sitting on a tree. . . the list goes on.