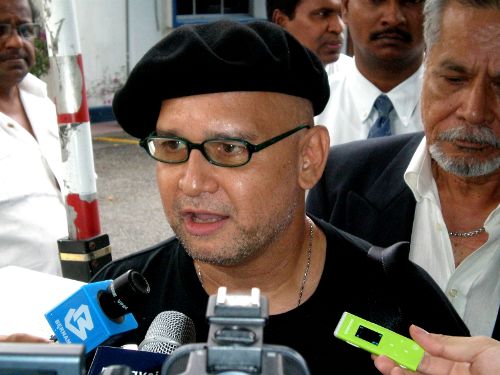 The Man With D Video Cam tells us why he thinks we have “the real deal” in our midst:

Rambo is a film character, a man with bulging muscles brandishing a serrated knife and creating havoc among his enemies. In the world of make believe, Rambo has drawn quite a following.

Men who walk around, exhibiting a bulky load of muscles with women clinging to either arm are the real men in this fanciful, make-believe world. Driving fast cars with branded sunglasses, they saunter around as if the world is their playground.

In contrast, what I have is a comfortable car that can still provide me with an uninterrupted journey to my destination and a woman who will stand by me – come what may. This is my world and I love it!

But there are still many things missing in my life. I want to live in the real world, which is more interesting and exciting than any imaginary world, which can be so deceiving.

One of my desires is to learn how to be a genuine human being – someone who is not easily swayed by superficial things but someone who has deep inner conviction, someone who is able to translate values into action.

My search has not been in vain because along the journey, I have found a teacher.

That special day was 8 September 2007. After listening to him, I felt a wonderful surge of chi (energy) and it began to harness my belief that he is the man to help me make the needed change. From that day on, I literally stalked him. I observed intently and tried to sneak into his thought faculty. I saw a man who is steadfast in his beliefs and stubborn as he could be to do what he thinks is right.

One thing that has put me to shame is that I am of his age but in no way can I stand shoulder to shoulder with him. But I can write from my heart unreservedly.

Who is this person who has the strength to say what he believes in and what his heart feels, who can draw others to feel within themselves?

Who is this person who has such a strong force of compassion within him that he can make people see what they should see?

And who is this person who can feel for the lowest segments of society and stretch out his hand in solidarity to give them hope for another day?

People, I am talking about Raja Petra Kamaruddin or RPK who has become a household name.

He may not win the most votes on American Idol but make no mistake, RPK is a bona fide Malaysian icon. He is one of the most important Malaysian thinkers today because his anxieties reflect the anxieties of the intelligentsia.

His thoughts have struck a chord in my heart; what amazes me is his ability to take it to the ground and connect with people beyond barriers of colour and creed.

To be afraid is reason enough to do what we are afraid of, and to hide one’s fear is to fall out from one’s real self. By facing fear, a genuine person experiences peace within.

So no one should feel weak, depressed or lonely.

Looking at him sneering at absurdity is enough to tell you that the system stinks to high heaven!

He is solid inside and is therefore not afraid to be vulnerable on the outside. Genuine human beings know when to be tough. And when their rights or those of others are being violated, they act courageously, as a matter of principle, and not just of false pride.

Like my brothers and sisters at the candlelight vigils, we want to be the real people who do not need adopt a Rambo-like combative stance. What we have instead is loyalty to the cause and a determination not to be afraid. Genuine human beings are therefore those who have the inner strength and wisdom to distinguish between what is right and wrong even in the most difficult situations.

Our common bond of commitment shields us from our external vulnerability. We are the people who can appreciate RPK without feeling less of a human being. This is what the great feeling is all about!

My only regret is that, I came to know this man a little too late but the consolation is that, it is not too little, too late. To describe how he has been subjected to intimidation and his solitude behind the walls of Kamunting, I have carefully chosen words to describe the whole scenario.

In the midst of the clouded mind, those in power see not themselves but deception and foolery. Those in power often resort to intimidation while desperadoes can become deranged. No matter how excruciating and painful the situation is, real men and women will take it in their stride. One such real person is the one everyone knows as RPK!

A human being cannot die well unless he or she lives well, and I want to die well!

An interesting reflection. I am totally flabbergasted.

Anil;2009 is not far away,any new events for Penagites to trully feel the Rights they are deserve to practice? Mansuhkan ISA.

RPK is a great man. Nearly every other person I know has made his site as their homepage and refer to it daily.

If not his page, it is malaysiakini.

RPK is willing to suffer for his actions. How many of his critics are sitting at home doing nothing but talk?

I think and know RPK is a great guy in many ways. My personal feeling is that RPK should be more careful, and not shoot from his hips like in the Wild Wild West. Even if whatever he is saying is the truth, the whole truth and nothing but the truth! Use the “PEN” wisely, and make sure that you can convey all your message, and nothing can stick to you – Mr Teflon!. How is that done? They are the journalist, so think about it. That is the difference between a Genius and a good thinker. One simplistic approach… Read more »

I believe it was Gandhi the Mahatma, who said some thing along the lines of” If you want change in this world, be that change”. RPK is quite distinctively a man who doesn’t mince words. He says it like he sees it. I dont know about him being icon and all, but I am sure of one thing though, he has raised my levels of awareness. As I am sure he has yours, Anil. But the interesting thing part, is he does not seek lime light; he is thrust into it. Such humility only serves us to be more in… Read more »

….yes so Anil should get registered with PKR and joined the election for the Kuala Trengganu candidacy …because as much as we support BA we don’t support PAS’s hudud and other extremist hypocrisy…

‘K’ is a living example of a neurotic crackpot. Anil, highly suggest that comments like this ‘K’ ought to be quarantine because it serve no value to human beings on this planet except destruction.

Ok enuff of this xxxx xxxxxx session. We all know you’r in love with RPK and we know both you n RPK are icons. But the Malaysia we live in is yet to see change. But hopefully with you guys around to enlighten us – we should be ok………..

I don’t subscribe to the idea that RPK is a great hero or an icon. I also think it an insult to the non violence movement to link RPK even remotely to it. Gandhi, the initator of the non-violent movement made “truth” as his fundamental and most important value in his struggles. In case of RPK, he mixes truth with semi-truth and lies and peddles it as gospel truth. He is more of an entertainer than an advocate of democracy and civil society. And faced with legal challenge, instead of facing it head on, he ducks it by denying posting… Read more »

6 weeks have gone by since RPK was released from Kamunting. There has been no further word since Hamid Albar threatened to appeal RPK’s unconditional release – which means the home ministry has no case and no cause to invoke the ISA on this brave man. I’m so happy RPK can celebrate the Silly Season & see the new year in in the warm embrace of his family & friends… but it’s really, really insufferable that there are still some of us locked away in that vile pit of iniquity under that most obscene of laws…. LET’S PUT AN ABRUPT… Read more »

you mean you have been deceived before? come on lar anil …i am sure there is this one time in your life you wish you were rambo too …