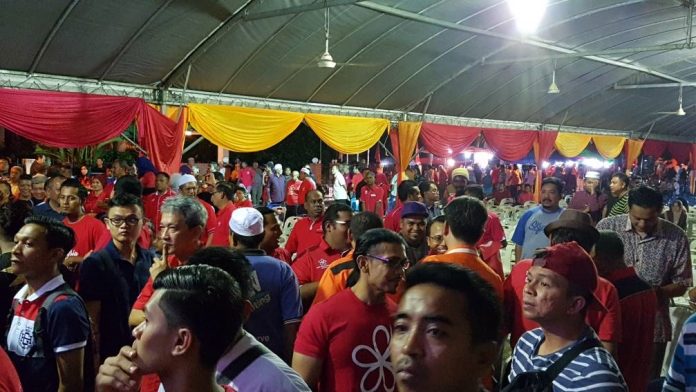 There’s a new group of red shirts around – but this time it is Umno’s turn to feel the jitters.

At the Mahathir ceramah in Tasik Gelugor in mainland Penang a couple of nights ago, I spotted Parit Buntar MP Mujahid Yusof Rawa of Parti Amanah Negara. I asked him about the fairly large turnout at the ceramah there.

He pointed to the distinctive presence of red shirts among the crowd. “See those guys in red shirts. Many of them are probably former Umno members,” he said.

He has a point there. These people weren’t supporters of the existing opposition parties. Proudly attired in their bright red T-shirts with Bersatu’s white bunga raya emblem on it, they stood out in the crowd of 2,000 in this Umno stronghold. 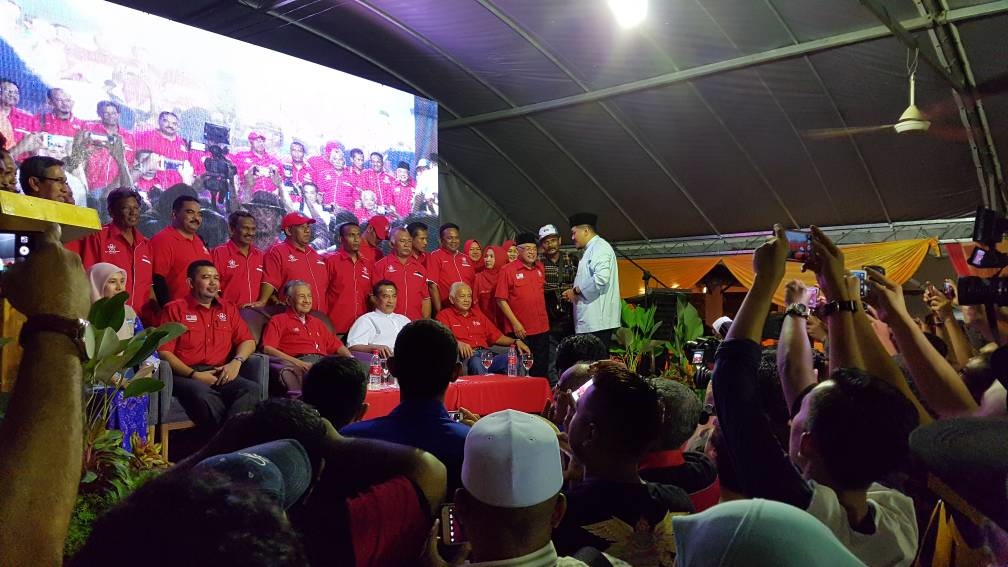 Given Bersatu’s recent focus on Tasik Gelugor, it looks likely that the party will be contesting in the parliamentary seat here, an Umno stronghold in the past.

At the ceramah, Mahathir continued to lambast Najib and Umno. Among the issues he raised was the influx of foreigners that could be coming in to buy property in the country, making ocal residents feel “uneasy”. “It doesn’t matter whether they are from China, India or Indonesia,” he said, probably to pre-empt any talk that he was playing on communal insecurities.

He also spoke of the 1MDB scandal and how 1MDB had acquired valuable land from the government on the cheap.

The ceramah was held near the house of the former local Umno strongman Shariff Omar, now with Bersatu.

Given the response from the local residents, Umno has good reason to worry whether it can hold on to parliamentary seats like this.

Bersatu leaders claim they are up to the challenge of explaining the party’s ties with the DAP. Shukur Mohamad of Batu Pahat regularly holds ceramah and dialogues with Johor’s Muslim Malays, who are arguably the country’s most loyal Umno supporters. “I explain to Malays how the parliamentary seat argument is flawed. If an Umno MP is defeated, he is defeated by another Malay MP from either Amanah, Bersatu or PKR, because an Umno candidate is always challenged by another Malay candidate.” said Shukur, who campaigns in Sri Gading, a seat that Umno won by a 5,761 vote majority in 2013.… Read more »

Or is Felda settlers a power bank to vote for Umno in GE14? Parti Bunga Raya is tapping the votes there with ceramah.

A COLLECTIVE of groups from Malaysia’s ethnic-Malay majority has warned of a repeat in sectarian violence that rocked the country in the 1960s, amid escalating tensions with a minority Indian-based NGO that purportedly questioned the rights of Muslims. The group – comprising 22 Malay NGOs on Wednesday – said it had formed a new front to defend Islam against “rude and dominant” groups from other races. The newly-formed Barisan Bertindak Melayu Islam (Bertindak) says the Indian group has struck a raw nerve with Muslims in the country by demanding the deportation of controversial Muslim preacher Dr Zakir Naik back to… Read more »

If Najib is not the public officer/official then who is he? A man who was elected as MP then appointed as PM then as well as Finance Minister then again the sole and approving body of 1MDB.

Is he a private officer?

Got this message on my WhatsApps today, good to share to those who doubt the presence of Tun M in Pakatan Harapan: We are between the devil and the deep blue sea. No choice, we have to trust Mahathir or be drowned. He still commands respect of all races. If we dont rope in the Malays, Harapan cannot form the next govt. I believe we have all learned our lessons by lettjng BN win time and time again. We are the ones who let them win by our selfish motives and wrong strategies. With Mahathir on our side, it is… Read more »

The Malays got Teraju and ASB.
Now the Indians get MIB (Masih Ingat Bohong?).
The Chinese only get JJPTR?
Shame on you MCA!

It GE13, Pakatan Rakyat captured the urban votes, but failed to swing the semi-urban/rural votes. With the inclusion of Bersatu, we see a large shift in Malaysia’s political landscape. The 3Ms are well-known for preserving the interest of the semi-urban/rural Malays. It’s ironic to see the BN-machinery labelling Dr Mahathir as a Chinese stooge when he was once labelled as a Malay supremacist. The fact that Dr Mahathir is still polling at 67 to 70 percent after almost a year of BN’s assault is indicative of people’s affection for him. It’s also important to note that in less than eight… Read more »

Trust that ‘cash is king’ mantra will sway many to Umno-BN come GE14. Also those ex-Umno fellows in Bersatu could have ‘old dirty deeds’ during Umno days that Mr MO1 could refer to MACC for arrest.

Already many Indians are flocking back to MIC-BN having witnessed some glimmer of light at the end of MIB tunnel, not knowing it could be a RUU355 train wrecking havoc – just like the child custody matter.

Jamal Yunos’s fan club will be confused by red shirts worn by buanga raya club?
Those days our polis very concerned with red being the propaganda colour of communism, so paradigm shift already happening in Bolehhand.
What a colorful country to be, when yellow green etc join in parade.

These Red Shirts are seeing red.

Because the actual accounts of MARA, Felda and Tabung Haji are all possibly in the red?

Mara and Felda bought overseas properties so that its officials get plenty of opportunities to travel abroad on holidays othe pretext of working?