PKR MP Tian Chua had a narrow escape when his car smashed into the divider of the the North-South Highway during heavy rain early this evening. 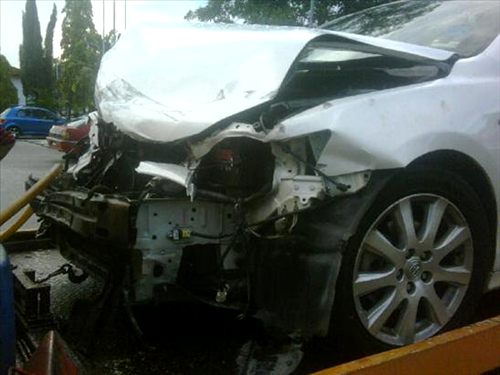 The impact crumpled the front portion of the white Camry, but the MP for Batu escaped unhurt.

Tow-truck drivers materialised within 10 minutes, before they could be called.

His driver later lodged a police report at the Bukit Beruntung police station.

Tian Chua said in a twitter message he was on his way to a ceramah in Lunas tonight.

Of course he was not speeding! He was slow but someone put oil on the road right? Some of you forgot F=MA … look at the damage la. I dare to bet my bottom dollar he was doing well over 120 kmh to get that much damage ok.

I have hit the barriers at NS Highway at a mere 120 kmh after the rain (clearly my fault) driving a mere Wira. Damage was less than this Camry.

Someone was rushing … they (probably) broke the speed limit…

Thanks God Tian Chua is alright as he is a good person.

I have spinned 360 degress and crashed at Bukit Beruntung before! No, I wasn’t speeding, it was raining and mine was the 3rd car that day. Speculation is that some cars or someone spilled oil on the road, and when you take the corner at BB, it will cause the car to skid.

Glad no one is hurt in this accident….

(Certain) tow truck thugs are well known to pour oil on certain stretches of road so that they can be there to “assist” after the accident.

K, yes, other politicians do the same. Nizar recently overturned his Camry.

So could Camry itself be the problem?

Co-incidental & Strange! First you have Perak’s ex MB and now Tian Chua! Wonder who is next???

Hee Yit Foong (gave up) her assembly seat (& soul) just because of a Camry !!!

Originally I wrote ‘Sold’ but was amended by admin.

Note the (bracket). This was the change admin made.

so we all curse those big ‘boss’ with their big cars & big attitude, going way over 110km/h, flashing / righthand signalling everyone out of their way….

by the way, how fast was he going to sustain a crash like that?

With that sort of damage, Camry did a good job…!

I am quite sure that the car is a personal one and not an official one. However I am curious on two points. One, Tian Chua used to drive an old car. So the fact that he can afford a Camry barely 2 years as a MP is rather intresting. Secondly, Camry is a very safe car with the latest safety features. So crashing it raises a question and we don’t see many other politicians do that even though they have a larger responsibility and travel more often. BTW, I have seen Tian Chuan in action and I can tell… Read more »

Your comment “So crashing it raises… we don’t see many….” make me want to vomit. Most of the politicians from BN drive Merces, BMW, Volvo.. Some even used private jet and helicopter.In term of safety features they are better. Most of them seldom meet rakyat so less traveling for them. Less traveling, less accident.

I have seen you giving comment and I can tell you are most probably from kindergarten.

No body wanted an accident. that why it called an accident, for the BN Minister they ada Police buka jalan la.. mana ada accident..

I stand corrected. I judged way too fast on wrong promises.

Do u know that Nizar also crashed his Camry?

Tian Chua is Batu MP – not a member of Selangor state assembly. So it is probably not Selangor’s car. Maybe it is a private car??? I hope he does not have to dig too deep into his own pocket to work for the rakyat. It seems like a thankless job. So dun make it worse …

To avoid car accident when there is heavy rain during broad daylight, wear dark sun glasses. This is the only way to help you see clearly otherwise you will find yourself in trouble.

He is being asked to do everything, and now to look after Tian Chua pulak !

God has better and bigger things to do la !

Stop bothering God with teeny tiny matter like this.

Wasted a Camry only !

As a Selangor taxpayer, and despite being a Tian Chua fan for years, I am not happy he is (allegedly) using his office car (the famous white Camry) for party-based ceramah outside the State. I know BN does much worse (using a helicopter for opening new UMNO branches for instance), but we have voted PR in for good governance not because we need another BN.
Nonetheless, I am delighted both his chauffeur and his goodself escaped unhurt.

Eric,
First of all, not sure if MPs got official car. Second, he does need the offical car to perform his consituency works though Batu is situated not far away from the Parliment
Being an MP can be very tough, unless you are suggesting MACC rading Tian Chia’s office, I think we better look at the big stuff.
Or we should go the Singapore’s way of paying MP higher salary.
Singapore MP salary’s S$13K per month serving 20K or less folks. Last check, Tian Chua’s Batu has more than 60K folks

@looes74, as I told Befair on January 26th at 1.21am, I did not check my facts correctly and therefore stand corrected on the car ownership. Mea culpa for shooting from the hip.
Duly noted for the rest.

Good to hear that he was in a large car Camry, which helped keep him safe. First Nizar, now Tian Chua. Quick toll truck. Since Tian Chua is safe, I can joke about the name Bukit Beruntung. What caused the accident in the rain?