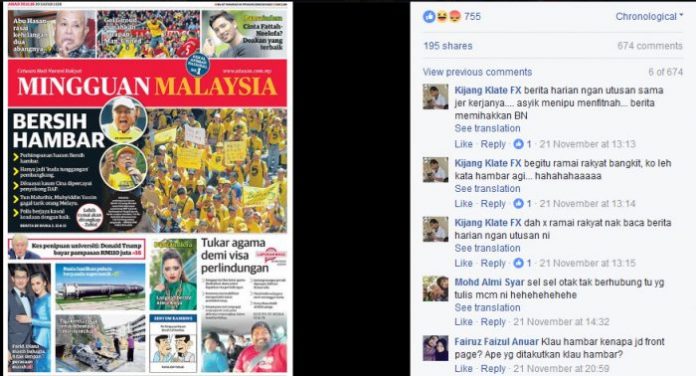 If we were to study the images of Umno Baru president Najib Razak and Pas president Hadi Awang together at the rally for the Rohingyas, we may discern signs of a budding alliance between their two parties.

Both parties appear to be building bonds in the hope that they can win a majority of the Muslim votes. They now appear to be banking on religious sentiments arising from issues such as Hadi’s bill and support for the hitherto neglected Rohingya community.

But this apparent alliance, rather than indicating that Umno and Pas are now operating from a position of strength, could simply be a reaction to shifting sentiment on the ground arising from a variety of factors. Think of the higher cost of living, compounded by GST; the burgeoning numbers of unemployed graduates and diploma holders; the weakening ringgit, arising from a loss of confidence in the leadership; and a growing realisation of the scale of the corruption in our midst, highlighted by the 1MDB scandal.

In recent weeks, there were three tell-tale signs that suggest Malay support for Umno could be ebbing.
Full article on Aliran website

With so much investment from PRC in Bolehland, Umno can no longer as the local Chinese to balik Tiongsan?

In desperation, they are turning to clerico-fascism i.e.
a mixture of ethno-nationalism and religious extremism.

The seven agreements in the electoral pact of Harapan and Bersatu, in summary, are as follows: 1. That the basis of the four parties’ struggle will be based on the Federal Constitution, particularly on matters concerning religion, special position of Malays and bumiputra, constitutional monarchy and the special position of the Malay language. 2. Commit to a reform agenda based on shared values, including truth, justice, integrity, welfare and good conduct. 3. Ensure that Harapan and Bersatu will not field more than one candidate for each seat during the next general election. 4. Initiate negotiations with other opposition parties to… Read more »

Astounding half million new voters registered in third quarter 2016! http://aliran.com/web-specials/2016-web-specials/astounding-half-million-new-voters-registered-third-quarter-2016/ That’s about 166+ thousands of newly registered voters per month! I have never been to Chowrasta fish market for years, been to CTY fish aquarium recently, but never have I sensed something as fishy as this one. Should open an investigation ASAP. I am not a religious man, but this country professes to an official religion. And majority of my religious friends from all the major religions in this beloved country express profound attestation for religious sincerity + honesty in all conducts of life. Let’s see who (under the… Read more »

How can MCA and Gerakan allow Umno/BN take over the Hadi’s private hudud bill, while continue to blame DAP over such matter? Care to explain?

Ebbing? Oh yes, all because of their own makings !

Najib is having renminbi ATM as lifeline in exchange of Tanah Melayu and sovereignty of South China Sea?

Is it because Umno is refusing to return the three seats – Wangsa Maju, Kuantan and Gelang Patah – all borrowed from MCA but were won by the Opposition in the last GE?

Luckily there was no Umno election this year, else he’ll will break loose as KJ has claimed to be matured from Youth to challenge the old timers like Hishammuddin, Sabri Ismail, Anuar Musa, Salleh Keruak, Rahman Dahlan etc for the Vice President positions.

All these are rotten car-jackers with no EQ brains & common sense.
See how they made statements after statements that in the near future will come back to haunt them.
Example is Hishammuddin waving a kris ‘tanpa pikir dahulu’.

In the international arena, they will fail more than shine, as in the case of Myanmar diplomatic row.
Example is PM of the street!

Whether you pray many times, one time or no time per day, at the end of the day,
it’s what have you earn an income to buy food, necessities & some form of enjoyment that counts.
It’s not realistic to behave like religious zealots at the slightest religious cry of this & that.
Pls take loving care of your household (or nation) before you take good care of others (other nations).
Be more than Malaysia Boleh (jaga orang lain).

UMNO neither have the required values in their DNA nor the competence to deliver meaningful policies. We need leaders that have an unyielding commitment to core values and that list starts with ABSOLUTE INTEGRITY. Our nation has been languishing in disparagements and political degradations for so long under the corrupt and manipulative practices of the Umno led BN regime helmed by PM Najib that the timely emergence by former minister Rafidah Aziz to articulate her displeasures cum astonishments over the mysterious withdrawal of invite to Dr Mahathir Mohammad by the keeper of the royal seal is deemed laudable and appropriate.… Read more »

Umno will perish according to the Rahman theory?

It will unleash lots of toxins in its final days.
The sign is all there.

Do not forget the infighting within Umno.

Malay votes are now fragmented, not exclusively with Umno.
The more Umno and Najib humiliates Che Det, the more Malay votes will desert Umno.
Also it is no longer effective for Umno to make DAP a bogeyman since Malays can see that the DAP government in Penang is neither anti Malay nor anti Islam.

May be using Obama’s last-minute-pop-up vote strategy: Muslim-immigrants from Myanmar.
If you happen to catch one, ask he or she to sing Negara Ku (just to prove).
Take a photo & send to election watch.
And send the culprit to Polis station with a police report.