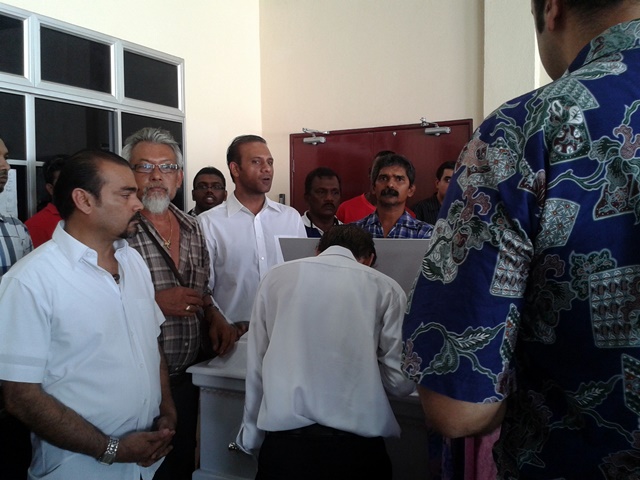 Over 200 people turned up to bid farewell to the late Karpal Singh’s personal assistant, Michael Cornelius Jayakrishnan, who perished in the road accident along with his employer.

A sizeable crowd had gathered near the new Forensics section at the Ipoh hospital awaiting the arrival of Michael’s body for a simple Christian. The new building is behind the GH and many were left searching for it because there was no proper signboard while the old vacant building within the hospital premises still had its large signboard.

Among those present for the ceremony were Karpal’s son Ramkarpal, Lim Kit Siang and former Perak State Assembly Speaker Sivakumar.

While waiting for the ceremony to begin, Kit Siang held an impromptu press conference, as journalists descended in droves.

A solemn atmosphere hung over the ceremony as hymns, including Amazing Grace, were sung and a church ministers led the prayers. The coffin was draped with a shroud bearing a cross.

“It is nice to see Malaysians coming together for Michael,” said one of the mourners. “May he rest in peace. They appreciate his services to our beloved Tiger. Michael will not be forgotten.

Ramkarpal thanked those present for coming and paid tribute to Michael for the dedication showed to Karpal. The family appeciates this hugely, he said.

The body is to be transported to KLIA for a flight to Chennai, India at 10.00pm. All the High Commission papers had already been prepared.

The fate of the Indonesian domestic worker, Selfiana Rengga, 26, also in the car, is unclear. She had reportedly suffered a serious brain haemorrage and had been hospitalised. (Update 24 April 2014 – She has had a successful operation to remove glass shards in her eye.)

The tragedy has provided a glimpse into the significant behind-the-scenes role often played by unheralded migrant workers in Malaysia. Several are killed in the course of their work, especially in the construction industry, most recently a case in Penang when a worker fell to his death at a construction site. But their deaths go largely unnoticed and the compensation to their families is unclear.

Michael, who had served Karpal loyally since the legal doyen was confined to a wheelchair, leaves behind two young children in India. Karpal’s family is reportedly making arrangements to see to their financial needs in the future.

Thanks to a blog visitor J for the info and photographs.

Are you Michael’s brother?

Kumar, you mean when you die, epf will take every good care of your family?

But, the family of Karpal has said they will take care of Michael’s family, you get it? This is the assurance better than any insurance companies can give you, understand?

Karpal’s children were with Michael on his funeral before flown back to India that alone speak volumes of how well Michael was loved by Karpal’s family, can you see it?

Another exploited south Indian worker. Did he have any EPF, any insurance, any retirement benefit, accumulated holiday pay or was this another of those pious platitudes of defending the rights of the “poor, the down trodden, the weak and the exploited foreign workers” by heroes who do not practice what they preach(?) Irene Fernandez too had … maids (working long hours?) in the extended family. No one said anything about it. Just because one does not get molested at work does not mean their working conditions are right. Especially when so called NGO’s preach from the highest mountains about the… Read more »

You have poor taste.

Michael, you had been faithful to your earthly master even till death.

The people will not forget you for your tenderness faithfully serving Mr Karpal.

A job well done and you are called to rest now…

The good Lord will take care of your family.

Oops typo – sorry should be ‘earliest’