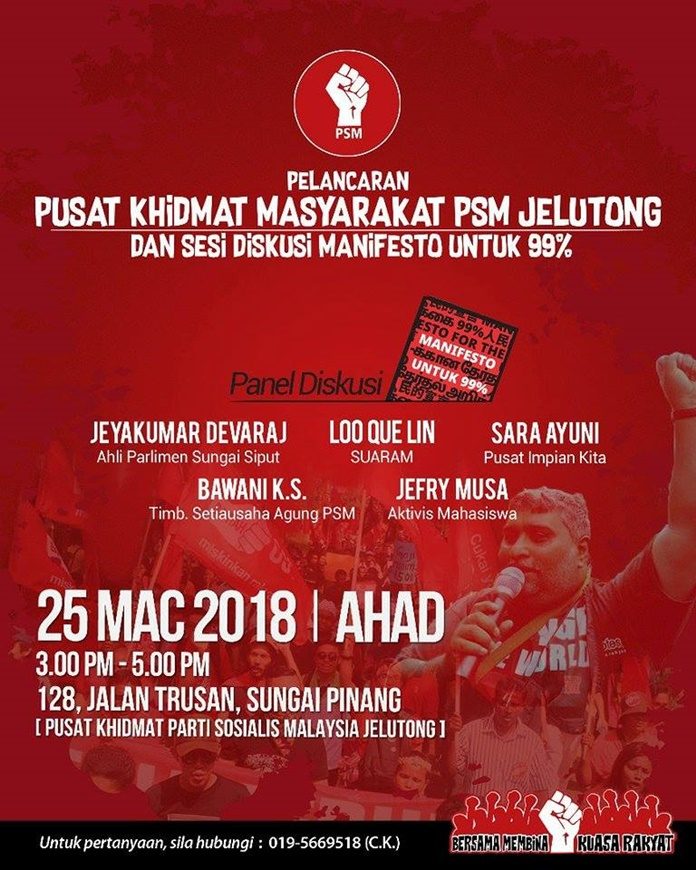 Parti Sosialis Malaysia is opening up a service centre in Jelutong, widening its sphere of influence in Penang and adding to the political discourse its idea of an alternative people-friendly economic framework for the state.

The opening up of the service centre in the working-class parliamentary seat of Jelutong (to add to its earlier presence in Bayan Baru) will not go unnoticed. The state seats of Dato Keramat, Batu Lanchang and Sungai Pinang fall within Jelutong, the bastion of the late Tiger of Jelutong, Karpal Singh. It is into this lion’s den that PSM is venturing.

While it remains to be seen if the party will actually contest a state seat in Penang in this year’s general election, the party probably is taking a longer term view into the next decade. So far, we know Parti Rakyat Malaysia is likely to provide three-corner contests in a string of state seats here, with Tanjung Bungah likely to be the focal point.

PSM could test the waters in Penang in this election. In future general elections after the coming one, it could provide a real alternative to the existing mainstream parties in Penang. It remains to be seen if the people of Penang will buy into the party’s alternative to the prevailing corporate-driven (and in the case of Penang, developer-driven) neoliberal economic framework. Already, we can see pockets of disgruntlement around the state.

The party may not make much headway in Penang in this coming election, but going by its track record of tenacious persistence, it is here to stay.

They must have hokkien-speaking personnel as Baljit Singh is using his hokkien linguistic skill to build a legacy as new Jelutong Tiger.

will the service centre still open if the PSM candidate lose his or her GE deposit?

For BN to be replaced by Harapan, We cannot vote for PSM in multi-cornered fights.

But I will vote for whichever party that can promise better facilities at Bayan Baru, as I have given up hope on PKR there. Maybe MCA can offer better things for us?

This will be Malaysians last election. If ph makes it, HALLELUJAH, if fails, we are in deep s…, no future at all…

PSM will not attract votes from the malay electorate as the party has been perceived as communist just like DAP has been perceived to be chinese. This propaganda is hard to counter.PSM will only draw votes from chinese and indians. The reality is chinese currently tend to group under DAP and its allies. Indians numbers are too small to be a game changer. PSM is too immature to think it can go alone under its banner. It cannot even win Sg Siput. It will only serve as a spoiler among non malays just like PAS is one among malays. PAS… Read more »

Are you confusing PRM with PSM in Penang?

PSM please deflate your ego and cooperate with Harspan for the sake of our nation.

1mil views for ‘face looks like he downed mothballs when Dr M arrives’ clip https://www.malaysiakini.com/news/416822 Take a close look at this green shirt man. He must be at the right place at the wrong timing! MadHatter is still a figurehead to reckon with despite his old age. I love the stare of MadHatter at this young man of ‘dah cakap banyak’. My Observation: If age comes with forgetfulness, this green shirt man, I assume must be in his early 40s should not have read his points from a piece of paper! He should prove his youthful power of memory instead… Read more »

If psm win over pg state, problem will get worse. Dummo with ah soon and calvin will squeeze with withholding funds. Investors will hestiate dye to socialist left ideologies. More pg lang will jump plane, ships and sampans looking for better opportunties.. Demise will be like ipoh. Now out side, here ipoh mari. Future pg mari orang

But stil lack of support. Needs more to do as well ppl confuse of logo and scope