Thousands of people turned up tonight for a Pakatan ceramah in Tanah Merah, an hour’s drive south of Kota Bharu. 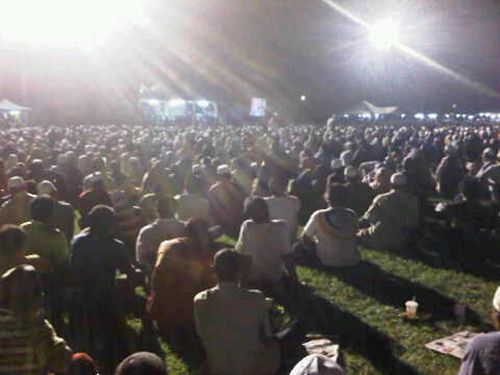 The ceramah was described as the largest in the area since the 2008 general election Photo credit: Asrulhadi

Among the speakers were Anwar Ibrahim, Nik Aziz, Kit Siang and Amran Ghani, the PKR MP for Tanah Merah.

Kit Siang spoke about the government’s subsidy plans and stressed that “the only way to save Malaysia from the fate of bankruptcy in 2019 warned by Idris (Jala) is to vote in a PR government.”

Apart from the subsidies issue, Anwar touched on the Apco controversy and the judiciary while Nik Aziz dwelled on inter-ethnic cooperation.

Another 3,000 people attended a PKR ceramah held in  Jertih/Besut.

Greece or Greek,Bn regime has been more busy then the Somalian pirates all this years…its time to kick them out for good…enough of this regime rule…we must take back the country … and hit the right track..vote for PR..!!!

BN said they only can deliver! So if our country going bankrap that means BN are poor managers. Pls let others save our country if u can’t. See, matter re Sime Darby quietened down after some (alleged) figures dressing. Poor shareholders…

Yes Dr Pang HC,like many of them have nothing to do on a quiet Saturday afternoon, might as well go to Anilnetto’s blog and write some nothing..

Do they sing that there?

Always remember that a crowd size is never a reliable gauge of actual support.

Many of them might have nothing to do on a quiet Friday night, might as well go listen to some political ceramah..

You hit the bull’s eye !

Under PAS govt Kelantan has no night life so there is no surprise that these folks turn up to see some comedians in action.

I wouldn’t be surpised if these folks were well compensated for their “attendance” by PAS … (?)

Darling, I know you are being cheeky, but, it is ok. No point quarelling among ourselves too often about politics.

Where were you during the life discussion on Sunday?

PAS for All and Salam Reformasi!

Hi everyone, The PR coalition should be registered ASAP. This will pave the way and enhance a 2-party system. It is well and good to call for subsidy reduction. The call, being very astutely made by Jala, a non-BN party minister, is to deflect and camouflage the past 53 years of BN mismanagement of taxpayers’ funds! Who and which party is to be blamed in the country’s financial predicament? What is the use of subsidy reduction when the BN is still continuing the abuses of enriching giant crony companies through direct negotiation tenders? In this process, the kickbacks obtained by… Read more »

Kill the cancerous disease and the patient will survive, likewise get rid of the root cause and the Nation will survive and thrive. It does not matter what they do because whatever they do will be to no avail. Like RPK said in London, it is no good attempting to treat the symptoms because it just simply will not work. It is the cancerous disease that should be treated. So therefore as long as UMNO is in the driver seat then absolutely nothing could be done. Before anything else, UMNO will first have to line their pockets, then their families… Read more »

…boy, you mean Selangor under that Toyo guy was very well managed??? Ya, i know he has a palace, a luxurious Disneyland trip, etc… You must be dreaming, dream on… Actually how i wish let there be no PAS, DAP or Keadilan but all are under one roof, that is, Pakatan Rakyat, is that possible? This is to show that we are ONE, we dont differentiate among ourselves anymore as Chinese, Malays, Indians, or other ethnic groups. It has been 53 years since independence. Why is our divide getting deeper and deeper when it should be the other way around?… Read more »

It was obvious with all the unfair ways and despicable manner, these UMNO rogues threw at Anwar to silence him have not worked…rather, it has enhanced his popularity and thus, uplifting the fortune of PR. The electorate have matured and intolerable, to UMNO arrogant displayed of corruptions in the recent “BUY ELECTIONS” Is this the sign, the end of the racist BN regime?

Yeah, …if this corrupt BN regime is not flushed out soon enough, this country will be bankrupt in 9 years!

Vote Pakatan Rakyat, we need CHANGE!
Count me in.

Reformasi very much alive and kicking!

It is good to note a Chinese speaking to a huge Malay crowd. Have we seen any other leaders from the Chinese parties, from MCA or Gerakan ever being able to speak to such huge Malay crowds?

Salam Reformasi, PAS for All

Hahahahah…you are funnier and more deluded than I thought.

If not for Nik Aziz, no would even bother to turn up for the talk. They came to listen to Nik Aziz and not for (those) from DAP.

Are you saying that the Chinese now support hudud ? Or PAS had dropped the Islamic state aim ? I remember the big drama that LKS created when Tun MM declared Malaysia as an Islamic country.

I am confused, I hope you can clarify if PAS has managed to change DAP or the other way around.

K, Hello darling, I do missed you. Whatever, I accept whatever your thoughts on Nik Aziz, DAP and PKR. No problem my dear one. What are you talking about Chinese, Indians, Malays, Kadazans, Ibans, Dayaks? We are all one Anak Bangsa Malaysia darling. Are you a Malaysian first or an Indian first? Hudud? Ala UMNO Baru? Well, UMNO Baru brought infamy to the country when they introduced hudud style of punishment. They caned 3 Malay girls for committing adultery, but, unfortunately the men were let off without any punishments. So unfair right, dear? And I am sure you know Kartikas… Read more »