A Bernama report titled ‘Obama congratulates Najib on premiership’ has been given a new headline in the NST: ‘Obama salutes Najib’.

If you read the Bernama report carefully, the language is just one of diplomatic courtesy and niceties. It’s the sort of message – often drafted by an underling – that a national leader would regularly send to a new leader elsewhere. Nothing exceptional in there to give the impression of Obama “saluting” Najib – and that too, one and a half months after the latter assumed the top post.

Meanwhile, Foreign Minister Anifah Aman let rip into Anwar during a joint press conference with Hillary Clinton in Washington – but in the process, he dropped a clanger. The US State Department reported Anifah as saying:

And also just for the information of the audience here that, you know, he also said that he will form a government on 16 September and he has changed the dates many time. And he was trying to entice the members of parliament. And I was personally offered to jump into the oppositions and offered a very lucrative position, and also to be told it’s like a deputy prime minister. And these are not known to the world at large.

This doesn’t make sense. Why did Anifah believe it when he was told that the lucrative position was like a DPM’s post?

How can the DPM’s position be considered lucrative, when even the premiership has only a salary plus allowance that’s far below the RM5 million paid to the chief honcho of Puncak Niaga, the Selangor water concessionaire? Unless Anifah  believes that the DPM’s post has other “perks”?

READ MORE:  New Malaysia not dead – but it needs a jumpstart

To make matters worse, Anifah said this in Washington – a place where no one would think of describing the vice-presidency – or for that matter, the presidency – as “a very lucrative position”. In trying to slam Anwar Ibrahim, the Foreign Minister has just turned us into a laughing stock.

Anifah should tell us in what way the DPM’s post is similar to a lucrative position. Incidentally, would he consider the Foreign Minister’s position to be “very lucrative” as well?

And we have lost five states and we willingly and accept the people’s verdict. And all the time we leave it to the people to decide, and which, on the other hand (Anwar) has not been able to accept.

Umm, you accept the people’s verdict (the loss of five states) – and all the time, you leave it to the people to decide? Like in Perak? 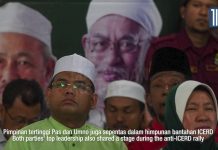 pm should appt someone more polished like anwar to be fm . what a shame degrade malaysian image further how come obama suddenly there is a new pm of small ctry with politicians behaving like ullu village heads , congrats came 6 wks late , western culture of politeness mistaken for genuine congrats dont tell me obama,s aides sleeping on job didnt send out mesej on time dunno which tree in malaysia to send congrats to . or he nt sure how soon the new pm will be replced in musical chair scenario hilary is legally trained ought to be… Read more »

Annifah….I think you should join the circus. There is one coming to town next month. They are looking for a clown. “cock a doodle do anything will do”.

You what the bible said about loose lips.

“A fool’s mouth is his ruin, And his lips are the snare of his soul”.

This proverb aptly described this person.

Perchance it was ony a straightforward 😀 “stab into the PMship’s back” by this .. Anifa-entity and not really a pretend blunderous one.

Hmm, with that the Anifa-mystery permutates and thickens verily like the dark contents of a jar of liquorice 🙂 treacle……

WE SAY YEAH! AND NO TO ISA! 😛 AND HARIS FOR AG & RPK FOR IGP! GO FOR DSAI FOR PM & LKS FOR DPM & KIND WAN AZIZAH FOR HOME MINISTER.

May 13th 1969 was replaced by May 2009 as in black mark for Malaysia. It is just an embarrassment one after another. First, BN totally embarrass us with the Perak legislation debacles. Second, our dearest FM goes on a personal attack in front of a country that fight injustice the most and than make a mockery of our beloved country. Than we have this Penanti joke about saving money and not contesting. The only promise BN need to made is forever hand off tax money, PDRM to do their actual work and judges are to be independent. We still have… Read more »

thank you YB Anifah for enlightening voters of how lucrative other Cabinet posts can be, since the DPM post is lucrative. Now we understand the ‘bidding’ process in a party’s general assembly.

Aiyo..man,…MALU ONLY MAH! HOW CAN ANIFAH TALK LIKE THAT ONE! Aiyah I also so shy lah..eh? What you mean lucratif? Is it make BIG MONEY POSITION ONE AH? PEOPLE ALWAYS SAY no money in politics, IS THAT SO?

I think Obama salute NTR for converting Malaysian courts into … courts, Police force into … and Ministers into …

You know what?? I just realise the Malaysian Agency for Cars and Cows (MACC) is soooo quiet. I think they are scared of even hinting of corruption charges against PR ADUN/MP….scared of a forced by-election..

Correct me if I’m wrong but wasn’t Anifah educated in the English medium in then North Borneo and further educated in the UK? And was it not the Star or NST that reported he was appointed as Foreign Minister for his ‘good command of English’ among others? Methinks the word lucrative is more a Freudian slip than a malaprop. But yes, he’s an unmitigated TWIT. Syed Hamid couldn’t have done worse.

Najib’s spinmasters must be so desperate, they are definitely on overdrive these days! LOL!!!!!!!! Yeah, Obama “salutes” him – his two bodyguards…. Well anyway they were found guilty of brutal murder of foreigner – Mongolian Altantuya Shaariibuu by C-4 explosive.

me thinks this is the KPI each Ministers must fulfill within 6 month and Anifah has reached his KPI – 1) Discredit DSAI….

Hillary was embarrassed to stand beside a man who made a fool of himself and the country he represents. He could have been pardoned if he had spoken broken English like so many of the other ministers. The audience would have then given the benefit of the doubt that a wrong word was used. But alas, he spoke fluent English and that gave his mind away. What a shame!

Everytime these Ministers open their mouth, they just make me want to vomit! He just confirmed to the western countries that Malaysian still live on trees! We are all idiots! And they are the saints! Anil you should inform whoever that did this recording the truth! What rubbish is Anifah talking, what judiciary system? What rule of law is he talking to Hillary? When did BN-UMNO start practicing the true rule of law? This is the kind of Minister that makes us all look stupid! I bet Obama and Hillary is laughing their heads off now that they know what… Read more »

of course it’s lucrative….
who’s the previous DPM??? hahaha….. maybe Anifah knows it from him….

OMG .. Anifah did what most of our mainstream media could not do – promote Anwar AND the Altantuya case on the world stage!! Well done!! LOL

Walau! This is a man who calls a spade a spade, someone who doesn’t beat around the bush or hee-haw in diplomatic language. We should salute him for his frankness and honesty. The DPM position is indeed lucrative and this is the truth but he should hold his tongue in front of others who don’t share (such a) culture of corruption.

Maybe try this for better clarification.
http://new2013nation.wordpress.com/
But exactly what is he trying to proof?

Why go into explaning and worst of all bring this dirty linens out in open? You can see clearly how Mrs Clinton smile almost can’t help laughing after hearing this young ciku go about bla bla bla, third grade politician talk.
Eye contacts are bad when it matter most, and trying to say- “Like I said..” projects as if others don’t understand English.Anyway, first time experience, what can you expect. Now more people will be curious about recent High court case too. Thanks to Anifah or any further?

Minute 01:03, Clinton said she is deeply in troubled, by the Burmese gov to charge Aung San Suu Kyi for a baseless crime.
Hmmm.. tat sounds familiar…

Hee… Hee… Hee… Obama not sure whether to congratulate him or not, that is why it took so long for Obama to decide. Hee… Hee… Hee…

Very well written, anna brella. All of what you mentioned is not known to half the world, let alone the whole world.

… BN ministers do not serve the rakyat but are just arrogant… Look at Sarawak and Sabah. The people of the land are deprived of their land and rights while governments allow project after project that threaten and rob them of their livelihood and wealth.

Talk about paying ransom to combat piracy… these jokers just must jump at every opportunity to make BIG money. Does anyone know the sum paid to the pirates and the sum declared as paid by the government? Only GOD knows… a thick-faced bunch is laughing all the way to the bank while the Rakyat continue to struggle for a living.. idiots!