Another attempt at dividing Malaysians by race: An MIC Youth office bearer has challenged N Surendran to a debate – but his challenge was brushed off by the PKR vice-president who insisted the MIC is “irrelevant”.

“I’m not an Indian leader, I’m a Msian leader,” tweeted Surendran in response to the challenge by MIC Youth secretary P Punithan.

“Pls do so,” countered Surendran.

“So u don’t want to debate with MIC? Not willing to accept with the challenge? Open debate. ?? Yes or No??” Punithan pressed on.

Pakatan leaders should not fall into the BN trap of divide-and-rule. Instead, they should adopt a more inclusive agenda covering the rights of everyone residing in Malaysia including migrant workers, refugees and asylum seekers. We are all members of the human family. 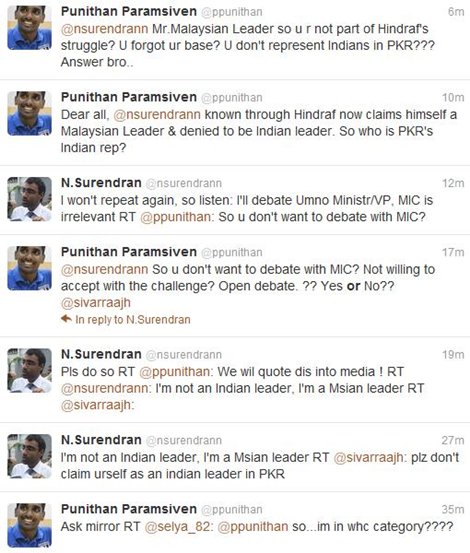 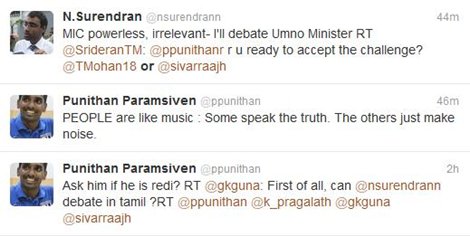 Dear Indian friends – KINDLY pass this info to Punithan Paramsiven, the executive secretary of Youth MIC. U want to debate, lets debate brother! On the issue of SRJK (T) Effingham. I have wrote to your President, Dato Seri Palanivel but he refused to answer. Now my challenge on you, Mr Punithan Paramsiven. If ur sincere, lets debate – on the future of Indians whether MIC or PKR… R u dare?!!!

MIC is a dead frog…Surendran should not entertain idiots from MIC…and I’m fully behinde DAP / Lim Guan Eng..he is doing a great job in Peneng…DSAI Vs Najib will be the most waited….

We want Najib vs Anwar debate.

Indian need a debate but it should be between Hindraf and PR but the problem is PR has to pick one to represent them..In fact it would make more sense to have Hindraf Vs Hindraf debate..

It will be good if a NON-INDIAN in PR accepts the debate with Punithan.
That will prove PR fights for the rights of all races – Irrespective of who the Leader is

The Star out to get LGE by all means …. Yesterday, The Star, in the article “What they said”, reported Lim to have said, “We do not agree the Prime Minister must always be a Malay because we want the people to decide” during the live debate with Chua on Saturday. The daily clarified its report today but at the same time, carried Baradan’s comment piece on another page which attributed the statement to Lim. The Penang chief minister later called on the English daily to apologise over Baradan’s column, saying the piece did not adhere to the spirit of… Read more »

Andrew I
Reply to  Ah舜

It’s the old tried and tested left hand does not know what the right is doing, so you can plead ignorance.

So Indians are only represented by the Tamils and Hindu’s eh? And what about the rest of them? Does MIC claim to only be Hindu and Tamil centric?

And what is with these jokers being so emotional? In the unlikely and eventually unfortunate event that a debate with MIC were to take place, I can only imagine the outcome…fights, gangsters and violence..too much Vaanavil IMHO ;p

Surendran is correct. He is a leader of Malaysians, and MIC is trying to bait him to gain the kind of audience like the MCA and DAP debate. PKR should not give these deadwoods a chance, unlike the stupid Lim Guan Eng. Again, Lim Guan Eng proved that DAP is a Chinese chauvinist party, if not, why should they debate another race based party, MCA? It is such a disappointment and we urged all Chinese to leave DAP, it is no difference from MCA. It is all talk and no action, we are fed up with the one upmanship of… Read more »

Are you Ahmad Sobri in disguise

Dear saudara Yang, I am not the celup, I had always been the orginal. And you cannot celup in this site. One thing, as an ardent supporter of PR, much more fanatic than many, I feel the pain and shame of the drubbing of LGE at the hands of Chua Soi Lek. He should had retaliated in words when PR and DAP were humiliated. What did he do? Just smile and stuttered and stammered. How can a leader be shamed on national stage by those useless, undisciplined MCA people? You want to debate with the likes of the lady who… Read more »

Dear Sobri, I think LGE was right in not answering some of the questions as many were off topic. As for the question from that silly woman, LGE should have asked her to make a complaint to MPPP since it is a complaint of sort. What if everybody kept asking hey, my rubbish was not cleared and did not come in time or why the drain was not clear and so on and on. Moreover most of the questioners were given to MCA members & with vultures stacked up against him how can you answer 6 or more questions in… Read more »

Dear Sobri,
Whether what I said is right or not just read this by a former head of MCA research unit.

The debate everyone hopes and looks forward to is the one between Najib and Anwar. This shall be a debate between the current PM and the leader of the opposition. A truly Malaysian debate unless one party or the other turns it into a Malay first debate.

If Najib feels he can’t articulate a Malaysian subject as well as Anwar, I don’t think the latter would mind taking on Muhyiddin if that is what UMNO wants.

Punithan is an idiot and a nobody now just dying for attention and publicity. Surendran is right, he is a Malaysian leader and his duty is to fight for all Malaysians. Punithan, as Surendran said, MIC is irrelevant. … So don’t waste the time of someone who has better things to do.

It’s inaccurate to say “Punithan is an idiot and a nobody now just dying for attention and publicity.”

I also can change it to “LGE is an idiot and a nobody now just dying for attention and publicity. “

So, according to you, the Chief Minister of Penang is a nobody. Thanks for clearing that up.