A car belonging to the daughter of the former Selangor state exco member Dr Xavier Jayakumar has been torched. 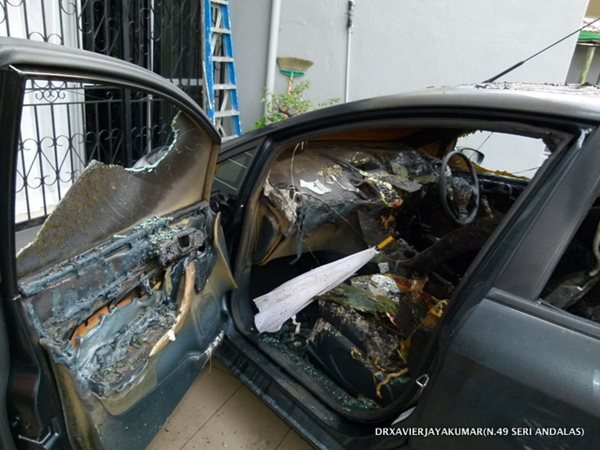 Xavier is contesting for the Sri Andalas state seat in Selangor, which he won in 2008. He issued a statement condemning the torching, describing it as an act of gangsterism driven by desperation.

yes, samee will go to any extent in trying to block
Jeya, but he cannot. There is no respect for him
I saw him yesterday addressing people in SP saying
that BN still has a chance there.

But people have decided that it is only JEYA they can
truly trust; SAMEE is bogus…

He has been given a job to do in Bangla; what is he
doing in Malaysia. The public is paying his salary
and he is in the country for the past two months
which cost the ordinary tax payers, approx. 50,000
ringgit.

Its desperation. The statistics and ground support proves it that UMNO/BN will definitely have a hard time winning this GE13. What ever stunts that is being pull, it will definitely back fire on them.