Thousands braved the rain today in Seremban Jaya in a show of support for political change in the country.

Eyewitnesses estimated the crowd at “tens of thousands” for the event dubbed ‘Himpunan Kebangkitan Rakyat’ (People’s Awakening Gathering) at the venue, 3.5km from Seremban. Azmin Ali tweeted the turnout at more than 30000 while a municipal councillor from Selangor at the scene said 25000 had turned up. 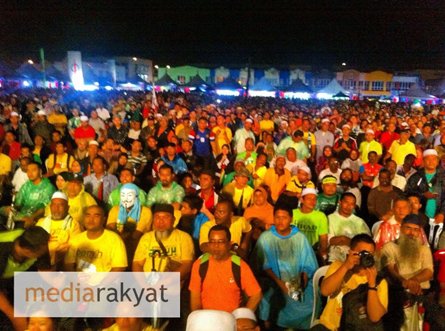 Umbrellas popped open as the rain pelted down. But then the sky cleared.

Here’s an aerial view of the crowd:

Tonight in Negeri Sembilan: Then the rain got lighter and more people came #fb twitter.com/elizabethwong/…

Fireworks exploded in the night sky above the stage adding to the festive atmosphere.

Anwar said it was ironic that Khalid’s political opponents had tried to bring him down by alleging that he had abused state resources to buy cows for his constituency. But in the end it was the Wanita Umno chief that fell following another cow-related uproar.

The ratio of household debt to disposable income in Malaysia is 140.4%, one of the highest in the world.

Are we heading for a bankrupt nation?

@Yang, why your statement “Ah Cheap & CSL are all about hudud and sex” ??? Do you know that constant non-stop PERSONAL ATTACKS against CSL have won more support for BN and MCA. I thank you for that. On the other hand, MCA has duty to warn all Malaysians about the danger of PAS hudud. Pas hudud and pakatan is a complete package. If you want pakatan then you also get PAS hudud. If you vote pakatan then you also vote pas hudud. PAS hudud is non-negotiable according to PAS top leadership. Do you understand now ??? It is loud… Read more »

so what do you represent? corrupts? robbers? philanderers? dont you think its ime to see beyond your nose before this country goes to the dogs?
Havent PR shown its capabilities to manage the two states well? They represent small minoriites? surely, the BN (culprits) are the minorities stealing state’s assets? well, at least PR MBs dont travel with maid in toll at state’s expense. and of course no HUMMER for their children. Enough said.

set me the guide whats tantamount to personal attack.
i will judge you on the same latitude. nothing personal. the same goes to kumar.
calling the crowd homos and what nots is ok to u?

grkumar, do have points. Many people just wanted to see our ex-DPM for many reasons. You know Anwar also very famous in Anwar vs Saiful case. I also like to attend Anwar and LKS ceramahs for information. Nothing new from them if you care to do analysis/comparison.

datuk editors in star needs to carma. dont forget, one of them was even garlanded by UMNO.
forgive them.

Andrew I
Reply to  mmc

I assume that they were garlanded with flowers or am I wrong?

Andrew I
Reply to  grkumar

“houseboat from the other races.”

If not for the heavy downpour for so many hours, the crowd would have eadily doubled.

False momentum. No one does it better than your idol. Same people in different corners of the same photo. Deja vu.

the longer Najib delays the poll, the more harm will be inflicted upon BN !

Rakyat now look forward to such Pakatan ceramahs, which will be in full swing as GE13 draws closer.

Today Star reported less than 5000 turn up for the opposition rally, what a bull? Stop lying. No one believes any more even the simple kampong folks. ABU is the only way to seek future competition for best goverment. For GE 13, 14 and 15 I will vote for Pakatan and from GE 16, the rayaat must return BN. When BN becomes the opposition they must revamp the party to become the best opposition party in GE 13 onwards. Please make sure all corrupted leaders must be replaced by leaders who are smart, highly educated and with the highest integrity.… Read more »

MCA is now frightening elderly Chinese (those with no access to alternative media) with PAS hudud and ‘stability vs chaos’ card (May 13 reference). Lately MCA has been donating money to Chinese schools in Johor to draw chinese voters. As seen in its AGM recently, MCA is banking on Najib’s approval rating to draw Chinese voters. That’s why besides its anti Pas hudud stand (no pork, no 4D, 1.2 million to lose job…), MCA is now playing the ‘I Love PM’ card in the hope that the Chinese voters could support 1Malaysia BN like they did in 1995 when 60%… Read more »

After 1987, Mahathir was losing Malay votes following the split in Umno and the setting up of Semangat 46. The Anwar sacking, which sparked reformasi, only happened in 1998.

Its pretty good considering the rain was pretty heavy for a while..

I honestly like the idea of Hadi Awang going mano-a-mano with Najib. Its attacking the (leader of) the pack so that the the long list of stragglers and neer-do-well is left with less cover and can be picked off.

PAS should make a decision quickly and PR should help Hadi get going full time in Pekan to scare the living daylight out of Najib..

Thanks anil for the update as such event is not covered by the mainstream papers and TV. I admire Anthony Loke who actually speaks for the chinese community. I look forward to such ceramah near my hometown. I am very tired of all the 1malaysia charades on TV.

I switch off the volume or totally off the TV every time those propaganda and songs at every intermission. It always remain me how wasteful and corrupted BN is. The more this is played on TV, the more I want to kick out BN.

In which the un-named reporter wrote, “Several thousand people were present as at 9pm…” Which gaves the impression of just a few thousand, maybe 5,000 or so?

Fewer than 50,000 yes, but can the Star reporter count? Took lessons from Ah-Tee Yong perhaps?

Andrew I
Reply to  KTWong87

Sybas, well done N9 and get the momentum moving! Stand up to this corrupt regime and together let’s dump them, really finish them off, no more an option!

I was searching for this news in Mediarakyat, but you Anil was first to put up. Syabas.
Yes, I was there.
The place is Seremban Jaya, about 1.5km away from Senawang proper.
This location is out of town,some 3.5km from Seremban town. On normal days, this housing estate would be quite by 10.00 pm.
But, yesterday evening,there was a ‘pesta’, despite heavy thunderstorm around 6.30pm and continuous rainfall throughout the night.
With all the umbrellas up, I could only have glimpses on the big screen.
However, listening to the speakers with high spirits was very entertaining.
What a good start.

Thanks sallangtioman, I have corrected it.

Wow! Convincing! Since when can we find a non-Malay, a Chinese speaking in a political ceramah to a huge Malay majority crowd? Can MCA do that? GELAKAN? MIC? The warning is in the air, and for a long time now, Rakyat mahu UBAH! I think UMNO/sycophants must have reasons to fear, very very much to fear, judging by the huge multi racial crowds wherever Pakatan Rakyat leaders speak. It is indeed a far cry from what MCA/GELAKAN can offer. Forget about MIC. GELAKAN is almost talking to themselves in ceramahs as there is always an absence of audience. The greatest… Read more »